It’s difficult to imagine a more tangible sign of God’s favor than great wealth. Abraham had it. So did David and Solomon. Even Job, after his intense suffering, was restored to double his previous fortune. Conclusion? It’s God’s will that all Christians should enjoy both wealth and steady health during their earthly lives. Your present poverty and physical ailments are marks of unbelief and an unwillingness to claim what is already yours in Christ. Give (money) in abundance and you will receive (money) in greater abundance. Trust God and never get sick.

Or so the prosperity gospel tells us.

Costi Hinn, nephew of famous prosperity teacher and faith-healer Benny Hinn, used to embrace this line of thinking with passion. Having grown up in the prosperity-gospel movement and observing its power firsthand, the younger Hinn was ready to follow in his uncle’s footsteps and give himself to preaching the good news of guaranteed health and affluence to the sick and poor. He tells the amazing story in his new book, God, Greed, and the (Prosperity) Gospel: How Truth Overwhelms a Life Built on Lies.

In God’s providence, however, Hinn went to Dallas Baptist University with an opportunity to play college baseball, despite the objections of some family members. A Baptist school wasn’t exactly the place where the prosperity gospel or its proponents would be revered. Yet while he encountered biblical truth in the classroom, his coach’s personal godliness and dugout devotionals on topics like God’s sovereignty began to undermine Hinn’s theological framework.

The Bible teaches that God does what he pleases, gives freely to his creatures, and isn’t obligated to shower material wealth on those who meet certain conditions. Because the prosperity gospel is built on the notion that believers can effectively force God’s hand by giving money and believing they’ll receive what they want, the truth about God’s sovereignty dealt a devastating blow to Hinn’s faith. Already feeling some theological tremors, his wariness would only increase as he got to know a Christian girl named Christyne.

Initially, the fact that Christyne didn’t share Hinn’s views on faith-healing, speaking in tongues, or the idea that a lavish lifestyle is God’s will for Christians didn’t derail the relationship. It wasn’t until Hinn mentioned his girlfriend to his family that the trouble really started. 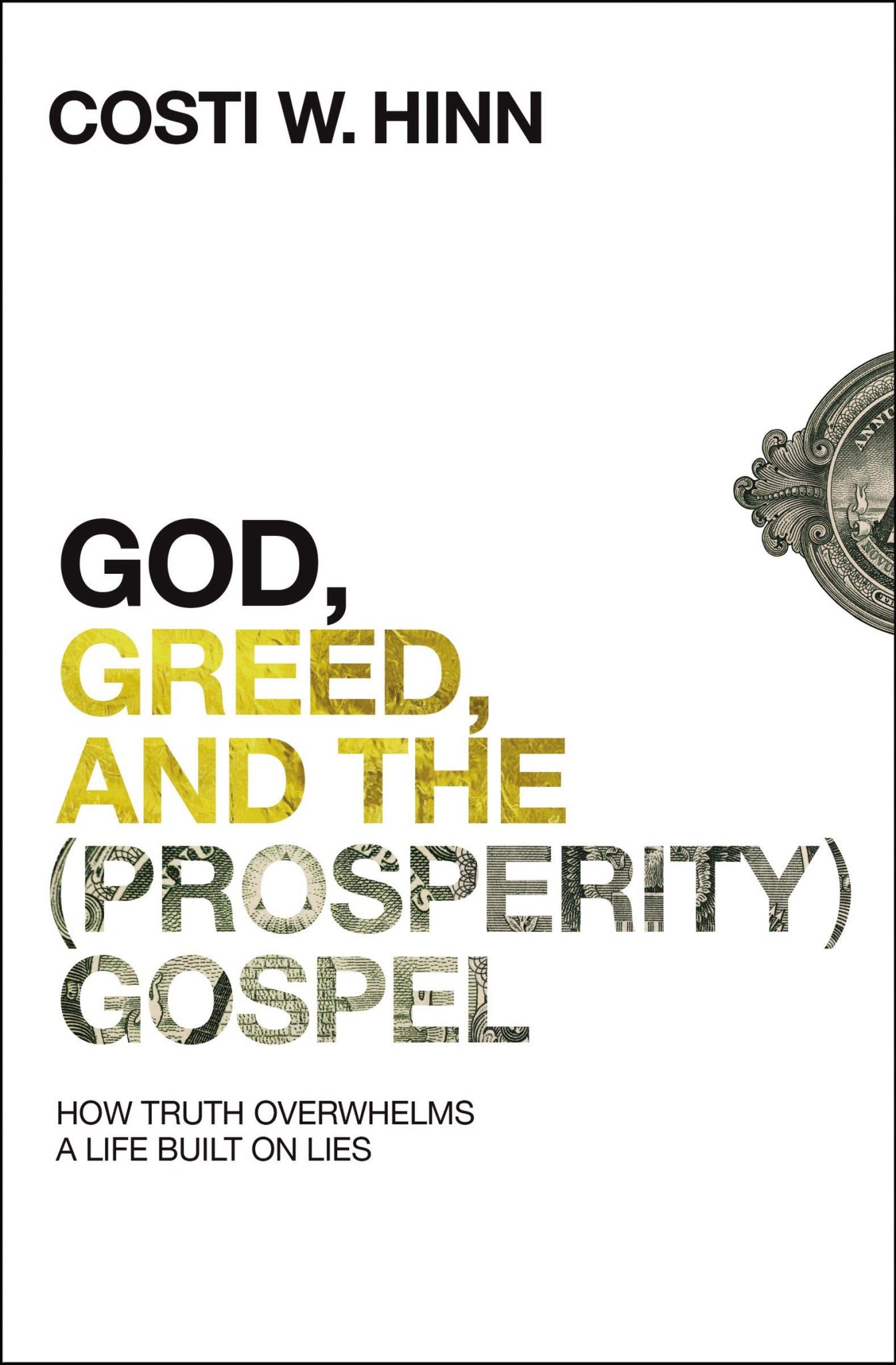 God, Greed, and the (Prosperity) Gospel: How Truth Overwhelms a Life Built on Lies

God, Greed, and the (Prosperity) Gospel: How Truth Overwhelms a Life Built on Lies

Through a remarkable and fascinating journey, Costi Hinn went from a next-generation prosperity preacher to the first to abandon the family faith and share the true gospel. Nephew of the world-famous televangelist Benny Hinn, Costi had a front-row seat to the inner workings and theology of the prosperity gospel. But as Costi’s faith deepened, so did his questions about prosperity teaching. As the deceptions in his past were exposed, Costi came face to face with the hypocrisy and devastation caused by his belief system, and the overwhelming truth about the real Jesus Christ.

Taking issue with Christyne’s more biblical views and her inability to speak in tongues, Hinn’s parents and extended family voiced their disapproval of the match. One family member even claimed to have received revelation that Hinn wasn’t going to marry Christyne. Despite his commitment to Christyne and his plan to marry her, other family members scrambled to “fix” her by taking her to his uncle’s healing services, pressing the issue of tongues, and implicitly requiring that she never get sick. This latter requirement almost ended in tragedy as Christyne, in an attempt to hide a chronic illness, was found temporarily paralyzed in the basement of Hinn’s parents’ home after an asthma attack.

Leaving the Prosperity-Gospel Lifestyle and Theology

Shortly after this incident, an old friend contacted Hinn and offered him a part-time position as a youth pastor in southern California. The move coincided with Costi and Christyne’s marriage and would signal a serious break with the prosperity gospel. Leaving the Hinn lifestyle and family circle was not easy, however. The newlyweds began their life together working multiple jobs to make ends meet and driving 120-mile roundtrips daily in and out of Orange County just to survive. God finally provided an apartment near the church, and the new couple starting selling Costi’s accumulated “prosperity-gospel treasures” to pay off wedding debt:

Next thing we knew, we were living two miles from church, and though it was no prosperity-gospel lifestyle, it was our life. I had gone from living in nearly 10,000 square feet to living in 600 square feet. From driving a Hummer, to driving a Chrysler, to driving a Kia Soul, to riding my bike because my wife needed the car to go to work. From shopping Versace to scouring Marshalls. (134)

Significant shifts, to be sure, but an even deeper change was on the horizon. While preparing to preach John 5:1–17, Hinn again came face-to-face with Scripture’s teaching on God’s sovereignty:

Coach Heefner’s words from my Dallas Baptist Baseball days came back to me: God is sovereign. This is what he meant all along. God is in control. He’s not some cosmic genie who exists to give me what I want and do what I command him to do. He is the majestic Creator of heaven and earth whom we exist to worship. . . . The gospel suddenly made sense. My life existed for the glory of God, not my own glory. God’s highest purpose was not to make me happy, healthy, and wealthy; it was to give him glory. (141)

More clearly than ever, Hinn recognized that the “gospel” his uncle and father had been broadcasting for decades is a paltry imitation of the real thing. Christ died and rose to give us the priceless treasure of sins forgiven and relationship with God, not to line our pockets with temporary riches. And faithfulness isn’t expressed by spiritually plundering the vulnerable to fund your luxury SUVs, opulent homes, and extravagant vacations. “Faithfulness was glorifying God, obeying him, and loving him above all and your neighbor as yourself. Faithfulness for a pastor meant giving your life to serve the church, not having the church serve you” (147).

Such newly discovered truths ignited in Hinn a passion to rescue those presently in the grip of the prosperity gospel. He began to study the history and theology of the movement, to speak with family members, and to reach out to friends who’d been hoodwinked by the false promise of health and wealth. Alongside his work as a pastor, Hinn presently labors to help believers better grasp the eternal dangers of the prosperity gospel.

God, Greed, and the (Prosperity) Gospel is more than a personal testimony, however. Intertwined throughout the book—especially the latter half—is forthright biblical commentary on wealth, the nature of false teachers, prosperity theology, and hard-earned wisdom on how to best engage those under its spell. Having learned from mistakes he made in harshly confronting family members over their involvement with the prosperity gospel, Hinn encourages us to pray for our friends and family, study the issues well, deal with our own sin first, speak the truth in love, and never give up sharing biblical doctrine with others. In the back of the book Hinn provides a list of several helpful resources for those who wish to pursue a deeper understanding of the prosperity movement and what Scripture teaches about wealth.

Overall, Hinn’s book is an engaging, easy-to-read, and well-balanced introduction to the prosperity gospel and serves as an excellent complement to his more academically rigorous work, Defining Deception. And in case you are wondering about royalties on a book about the prosperity gospel, Hinn is directing all proceeds to fund theological education that will equip Christian leaders to better reach those ensnared by the health-and-wealth gospel. For Benny Hinn’s nephew, it’s truly more blessed to give than to receive.