Matthew Vines is a man on a mission to persuade evangelicals that the truly biblical position on homosexuality affirms same-sex partnerships. That is no small aim, and yet Vines is in some ways well placed to attempt such an undertaking. Vines dropped out of his studies at Harvard in order to investigate what the Bible teaches on homosexuality. In God and the Gay Christian: The Biblical Case in Support of Same-Sex Relationships he is open about his own experience of coming to terms with homosexual feelings, and of how he found sharing this with his conservative Christian family. His 2012 video arguing that Scripture has been misunderstood went viral. So it is no surprise to see that he has produced a book, and that it comes with a lot of anticipation. Those commending it argue that it is game changing. It certainly intends to be. Vines calls on evangelicals to radically reassess their reading of the Bible on this issue. He is looking for no less than what he describes as a reformation.

Axiomatic to Vines’s argument is that the traditional evangelical position on homosexuality has produced such “bad fruit” that it must be seriously questioned. He recounts heart-wrenching accounts of young gay Christians driven to despair by the position of churches and Christians they have encountered, in some cases with tragic consequences. Taking his cue from Jesus’ parable in Matthew 7:15–20, Vines argues that this kind of fruit can only be indicative of a bad tree—that the church has misunderstood this issue for much of its history. This conviction then propels him into questioning the church’s insistence on “mandatory celibacy” for same-sex attracted Christians, a wide-ranging reassessment of what the Bible actually says about homosexuality, marriage, and humanness. He concludes with a plea for evangelicals to affirm and celebrate same-sex relationships in the church.

So is his case compelling? Overall, it’s well crafted and presented. Vines is clearly an able and passionate communicator. The book is well written and, for the main part, winsome in its tone. Some will feel assured by Vines’s claim that he writes as an evangelical who has a high view of Scripture. Such affirmations, coupled with a smattering of approving quotations from the likes of Tim Keller and John Piper, mean his evangelical credentials look to be sound.

Yet for all this, there are some deep flaws in Vines’ approach, and especially in his anthropology.

Though Vines claims to be evangelical, his approach in God and the Gay Christian strikes me as the opposite. His unquestioned foundation is his belief that the “bad fruit” of those who cannot affirm same-sex relationships must be indicative of bad theology. He then looks for every possible way to make sure each biblical text can’t be saying what he’s already decided it doesn’t say, before concluding that indeed it doesn’t and could never have possibly done so. It is not hard to see where the real authority lies in his thinking, and it means his handling of both Scripture and scholarship is profoundly uneven. 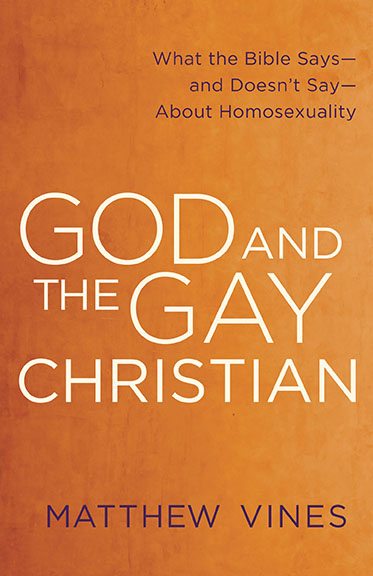 God and the Gay Christian: The Biblical Case in Support of Same-Sex Relationships

God and the Gay Christian: The Biblical Case in Support of Same-Sex Relationships

On scholarship, different writers on this issue are given different weight depending on which side of the discussion they land. While the findings of those advocating a revisionist position are advanced with cast-iron certainty, arguments from the best conservative scholars are frequently dismissed with a wave of the hand as being “speculative.” Only by such means can the traditional understanding of marriage predicated on gender difference be so quickly brushed aside.

Similarly, there are numerous instances of poor exegetical thinking. Vines insists that gender complementarity cannot be foundational to biblical sexual ethics unless it is restated as a principle at each point where it’s applied. But its foundational nature is why such repetition is not necessary. He also has a habit of determining the meaning of key biblical terms not by their biblical context, but by their use in literature outside the Bible. This is particularly frustrating in his discussion of arsenokoitai in 1 Corinthians 6:9, where the background of Leviticus is quickly dropped in favor of later occurrences in Greek literature. At times the book doesn’t feel much more sophisticated than saying, “If you close one eye and tilt your head to the side it starts to look like its saying something else.”

If we were to apply this sort of reasoning to his own book we would be forced to conclude that the word “Vines” on the cover is not the author’s surname because (1) in none of its occurrences is there any explicit indication that it’s meant as a surname, and (2) in contemporary usage the word is overwhelmingly used to denote either grape-bearing plants or short videos about pets posted online. And if we can no longer assume “Vines” is his surname, we have no confidence to continue asserting that “Matthew” is his Christian name. I won’t even start on how the first part of the publisher’s name is “Con” . . .

But the most troubling aspect of this book is its anthropology. We in the West find ourselves amid a culture that increasingly encourages us to seek ultimate human meaning in sexual fulfilment. Our core human identity is found in our sexuality, which in turn is defined by our desires and attractions. Yet this is an appallingly inadequate way to account for a human being, and contributes as much as anything else does to the bad fruit that Vines so rightly laments. And yet so much of his anthropology seems to take this perspective in unquestioningly. And so to deny someone full expression of his sexuality is tantamount to causing him to hate his very self. Indeed, Vines goes as far as to say it makes them less human and less like God (166).

But this is not a biblical understanding of what it means to be human. My sexuality is not to be found in my feelings but in God having created me male; it is not primarily psychological but bodily. So I am not to read my core identity off my sexual desires, but to receive the sexual identity God has already granted me as a male as a good gift to be lived out and enjoyed. My sexual desires are part of what I feel, but they are not who I am.

This is incredibly significant. If my sexual feelings are who I am at my core, then they must be fulfilled in order for me to even begin to feel complete and whole as a human. My sense of fulfilment is cast upon my sexual fortunes, and everything seems to depend on it. But being a Christian gives me a different perspective. My sexual desires are not insignificant; they are deeply personal. But they are not defining or central, and so fulfilling them is not the key to fullness of life. I suspect our culture’s near-hysterical insistence that your sexuality is your identity has far more to do with the prevalence of torment, self-loathing, and destruction than we have begun to realize. Are we really to suppose that only good fruit has come from affirming same-sex relationships or encouraging Christians to self-identify as gay from a young age? Or that no spiritual and psychological damage has resulted from this?

And are we also to suppose that only bad fruit has come from the non-affirming position? What of those of us who experience same-sex attraction and yet are committed to the traditional understanding that the Bible prohibits homosexual behaviour? Many of us who have found the evangelical church to be a place of open-armed acceptance, support, and encouragement; Scripture to be sometimes hard but always good; singleness to be both costly and positive; and Christ to be our fundamental and everlasting joy.

This is not to say that the church has been perfect on this issue. Nor is it to say that life as a Christian with same-sex attraction is easy. There can be deep pains: battling with desires we wish we did not have, times of isolation and loneliness, and the absence of romantic companionship. But we do not need to write these hardships off as bad fruit stemming from bad theology.

A better fruit-themed biblical analogy to account for them may be Jesus’ claim to be the true vine, with his people as branches connected to him and God the Father as the gardener who sets about pruning us for greater fruitfulness. Yes, there are times when the gardener’s blades feel sharp, but we know the hands that wield them know nothing but kindness.

What makes God and the Gay Christian such sad reading is its failure to see the goodness of God in what Christians have always believed about homosexuality. I have no reason to doubt that Vines is a kind man. And so it is a sad irony that his book’s greatest failing is that it is, ultimately, not kind enough.

Sam Allberry is a pastor, apologist, and speaker. He is the author of 7 Myths About Singleness, Why Does God Care Who I Sleep With?, and, most recently, What God Has to Say About Our Bodies. He is in the process of moving to the United States to join the staff at Immanuel Nashville, is a canon theologian for the Anglican Church in North America, and is the cohost (with Ray Ortlund) of TGC’s podcast You’re Not Crazy: Gospel Sanity for Young Pastors.