Why are Christians so obsessed with sex?

It’s a question that’s often assumed, if not asked outright, by people who aren’t Christians. The question itself can be a little perplexing for Christians: what do you mean “obsessed” with sex? Aren’t Christians known for more important things, like what they think about Jesus Christ, or the Bible as God’s Word?

While the question may sound odd to Christians at first blush, the substance of the issue remains. For many people, what Christianity teaches about sex is, frankly, strange.

Sam Allberry’s newest book, Why Does God Care Who I Sleep With?, seeks to address this issues in a clear, pastoral manner, helping readers understand the beauty and aim of God’s design for sexual union. 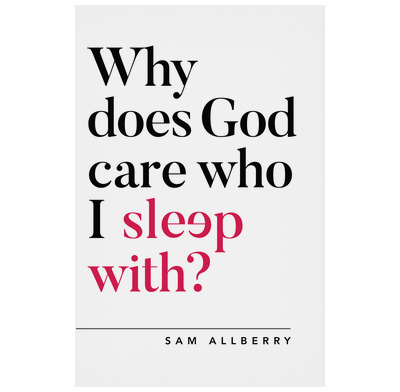 Why does God care who I sleep with?

Why does God care who I sleep with?

Christians are increasingly seen as outdated, restrictive and judgmental when it comes to sex before marriage, cohabitation, homosexuality, gender identity, or transgender rights. In fact for many people, this issue is one of the biggest barriers for them considering Christianity.

Sam Allberry, author of many books including Is God Anti-Gay? sets out God’s good design for the expression of human sexuality, showing that God himself is love and that only he can satisfy our deepest desires.

Allberry—a speaker with Ravi Zacharias International Ministries and contributing editor of The Gospel Coalition—doesn’t shy away from hard truths like the horror of sexual abuse and the faulty cultural understandings that govern sexual behavior. Instead of reflexively trying to accommodate Christian sexual norms to current cultural understandings, Allberry points out that while critics of Christianity might chastise believers for being too restrictive about sexual morals, the critics themselves—all people, in fact—place restrictions on sexual behavior. But whereas the Christian vision of sex is coherent, the cultural code is constantly shifting the goal posts. “What is distinctive about the Christian understanding of sexual ethics, then, is not the presence of boundaries but where those boundaries are located and for what reason” (28).

Whereas the Christian vision of sex is coherent, the cultural code is constantly shifting the goal posts.

This logic—exposing that everyone makes moral judgments regarding love and sexuality—is consistently applied throughout and helps to reframe the issues separating Christianity from cultural expectations regarding sex and love. By bringing clarity to these differing visions, Allberry not only makes an apologetically useful move, he also re-centers the animating question at the heart of the book.

The heart of the book, then, is to showcase how sexuality is far more than “a passage of fluids”; it’s a deeply sacred act, a “holy fire” to be shared exclusively between husband and wife in their marital union. The act signifies something larger, something more significant, than the act itself.

Sex was established at creation for the propagation of the human race, and the unity of the original couple. But it was created to point beyond the created order to the cosmic redemption accomplished by Jesus Christ. Marriage’s true end is picturing the love between Christ and the church (Eph. 5:32), his return is pictured as a wedding feast (Rev. 19:6–9), and even the language of Christ as Redeemer has marital resonance (Isa. 54:5; Lev. 25:25; Ruth 4:9–10).

Thus, sexuality and marriage are about self-giving. The focus for any spouse is to be, like Christ, aimed at accomplishing the good of the other. The Christian sexual ethic is fundamentally shaped by this reality: the husband or the wife aren’t ends in themselves, given only for their pleasure and whims. They are God’s image-bearers to cherish.

Sexuality and marriage are about self-giving. The focus for the spouses is to be, like Christ, aimed at accomplishing the good of the other.

For Christian spouses, they are, for one another, opportunities to love God by loving their closest neighbor—the neighbor they share their most intimate spaces with, the one to whom they extend their very bodies. For Christians, marriage is about giving their lives for the good of another.

This positive vision of sexuality was captured in earliest Christianity and, arguably, one of the reasons Christianity appealed to the outside world. It seems somewhat odd to modern sensibilities, but Allberry follows historian Kyle Harper in calling Christianity’s transformation of sex in the ancient world “the first sexual revolution.” That is, the Christian vision of sex that sought the good of both spouses—not just the men—was liberating to those on the margins, and women especially.

With an emphasis on things like consent, mutuality, and constraints on men, Christianity radically reshaped the culture of sexuality in late antiquity. Christianity’s sexual ethic hasn’t become controversial in the last few decades—it has always been controversial. As Allberry writes, “Though the reasons have varied from age to age and culture to culture, Christian teaching on this issue has never been in vogue” (63).

As Christianity’s influence in our culture continues to recede, we shouldn’t be surprised to find the question of the book repeatedly asked. Instead of causing despair, we should hope that more people outside of Christ would see this vision as captivating and beautiful, one that re-dignifies the sexual act and makes sense of its purpose.

The fruit of the 20th-century sexual revolution doesn’t look promising for the primary recipients of its liberation: the children of broken homes and sexual confusion. We’ll need a sexual catechesis that points the way forward by looking backward. With pastoral sensitivity and candor, Allberry’s book will help these sexual refugees find their way back to the beautifully good vision that Christianity offers.

Scott Corbin lives in Fort Worth, Texas, with his wife, Jessi, and their three children. He works as a marketing strategist for Lexham Press.