If you could summarize 2020 in one word, what would it be?

Chaos, outrage, fear, unknown, polarization, or anger immediately spring to mind. One that wouldn’t is gentle.

But in a world tossed to and fro by the 24-hour news cycle, nonstop scandal, political upheaval, and ever-increasing outrage, perhaps gentleness is exactly what it takes to break through the noise, division, and hate. Maybe gentleness is the Christian’s secret weapon to not just diffuse tension and anger, but also to demonstrate the truthfulness and beauty of the gospel to our culture. 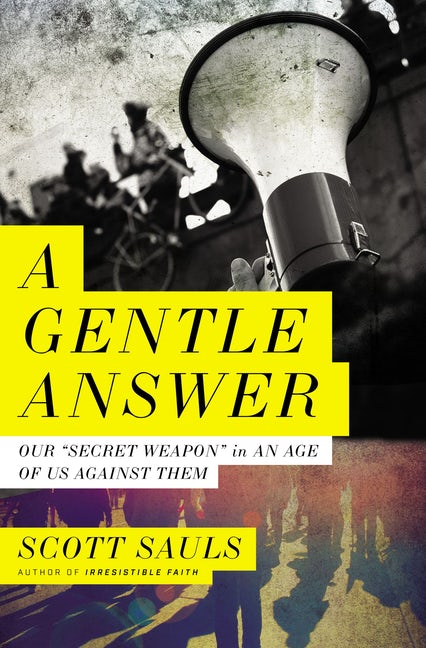 A Gentle Answer: Our “Secret Weapon” in an Age of Us Against Them

A Gentle Answer: Our “Secret Weapon” in an Age of Us Against Them

In a defensive and divided era, how can followers of Jesus reveal a better way of living, one that loves others as God loves us? How can Christians be the kind of people who are known, as Proverbs puts it, to “turn away wrath?” Scott Sauls’s compelling new book shows Christians how to become people of “a gentle answer” in a politically, relationally, and culturally fractured world by helping readers:

I know what you might be thinking. Gentleness? Really? I don’t think gentleness is going to solve these issues. I’m angry. We need change now! We don’t have time to be gentle. Gentleness, however, may not always look like what you expect. That’s exactly what Scott Sauls—senior pastor of Christ Presbyterian Church in Nashville, Tennessee—addresses in his new book, A Gentle Answer: Our “Secret” Weapon In An Age of Us Against Them.

A Gentle Answer isn’t tips and tricks about how to be nice. Gentleness isn’t just about the things we do; it’s about who we are. It’s about our spiritual formation into people whose natural disposition to the world is gentleness—not passivity, not turning a blind eye, but approaching each person and situation with the gentleness of Jesus Christ.

For this to happen, though, we must be transformed by Christ’s gentleness toward us. Sauls lays out this transformation in three ways: Jesus befriends the sinner in us, he reforms the Pharisee in us, and he disarms the cynic in us. Without these three things happening in our hearts, there’s no path forward.

Gentleness isn’t just about the things we do; it’s about who we are. It’s about our spiritual formation into people whose natural disposition to the world is gentleness.

Cultivating a gentle spirit hinges on a paradigm shift: “Jesus and Christianity do not discriminate between good people and bad people. Instead, Jesus and Christianity discriminates between humble people and proud people” (11). Jesus doesn’t discriminate between the good and the bad because, well, we’re all bad. We’re all sinners. If he discriminated between good people and bad people, we’d all be out. Rather, it’s a humble heart that Jesus can mold and use. He can’t use the proud, because they can’t submit to his will. Pride will never allow for gentleness, because it will never admit its own faults. Humility is the pathway to embodying Jesus’s gentleness.

This pride manifests itself the way it did for the Pharisees, on both the right side of the aisle and also the left. It insists on an ideological, cultural, or moral purity before it can love another person. Pride can even show itself in cynicism toward Jesus, wondering if he truly is who he says he is.

But Jesus breaks all of the categories by which we judge others and ourselves. He sees us as we truly are: full of sin and hurt, as well as potential. We are profoundly loved, and Jesus fights for all of us.

How to Be Righteously Angry

Allowing Jesus to change us, we are formed into his image to embody his gentleness. Sauls explains this transformation in five ways:

Being “nice” isn’t being gentle. “Nice people, in their reluctance to confront, can sometimes work against the purposes of God” (105). Sauls points out that anger isn’t necessarily a sinful emotion. He distinguishes between destructive anger and restorative anger. Restorative anger is the anger that brought about the civil-rights movement, that led Mother Teresa to speak boldly about abortion to President Clinton, and that leads to movements of justice for the oppressed all over the world today. Restorative anger doesn’t destroy its enemy; it acts in confidence and surrenders the results to God. “While toxic anger destroys the good in order to promote evil, healthy anger seeks to destroy evil in order to promote and protect the good” (105).

Gentleness isn’t simply the way we respond when provoked; it’s the lens through which followers of Jesus are to view and approach the world. As we bring his gentleness to bear on the world, we won’t leave injustice and unrighteousness untouched. We will defeat evil by refusing to respond in kind.

These five practices aren’t immediate solutions. We become gentle by training over time, by practice in the small things:

The cumulative effect of nurturing the fruit of the Spirit in these frequent, small moments enlarges my capacity for health when a bigger irritant or even a true injustice comes my way. . . . The way to protect ourselves and others from the wildfire that sparks of anger can become is through attentive and faithful stewardship of the minor, daily irritants in our lives. (112–13)

All of this is the overflow of being transformed by Jesus’s gentleness: “The more attuned we are to this reality of indwelling sin in us . . . the more empathetic and gentle and kind we will likely become, even toward those who’ve done horrendous and unspeakable things” (172). Sauls constantly points us to the gospel as the means by which we become people who embody Jesus’s gentle spirit.

How We Answer the World

It’s impossible to read this book without thinking of another that was released earlier this year, Dane Ortlund’s Gentle and Lowly. Ortlund turns the diamond of Jesus’s gentleness toward us, sinners and sufferers all, and lets us to bask in its light. A Gentle Answer is the application of Ortlund’s work. Gazing on Jesus’s gentleness and receiving his deep love for us transforms us into people who reflect that to others. Not to turn a blind eye to the world, but to partner with Jesus in his kingdom agenda under his gentle, transformative rule.

Gazing on Jesus’s gentleness and receiving his deep love for us transforms us into people who reflect that to others.

It’s as if these two books were meant to be read back-to-back. Indeed, their messages have never been more needed than during this hotly contentious election cycle. If we Christians can’t respond to those with whom we disagree, and to the evils of this world, in a way that reflects how Jesus responds to us, we will become the very thing we despise. We will become what we warn others about. But if we are transformed into gentle people by our gentle Savior and King, we truly have an answer for the world.