Even though I’ve played video games since I was a child, I’ve always wondered whether they should have a place in my life, especially as Scripture challenge us to do everything to the glory of God. I’ve often wondered if I’m wasting time instead of redeeming it. There have been seasons in my life, mostly while in college and seminary, when I’ve done away with video games altogether in order to ensure my success and sanity. Now, as a freelance video game journalist and the managing editor of Gamechurch, I have to play video games to do what I do. Even still, I wrestle almost daily with questions implied by the medium and its surrounding culture.

The debate about the nature and validity of video games has been, for the most part, bungled by both sides. Knee-jerk reactions depend on secondhand impressions and assumptions. Many Christians see video games as a waste of time with no payoff, a series of murder simulators, or an insipid means of escapism that distracts from real-life problems. Those who play them often respond to these sentiments defensively, countering with thoughtless insistence that violent video games are “just games” and that those crying “addictive” and “escapist” are merely voicing fear based in ignorance.

Even pastors like Mark Driscoll have spoken about video games in overreaching terms. “Video games aren’t sinful, they’re just stupid,” he explains. “Young [men] and now women are joining it; they want to get on a team, be part of a kingdom, conquer a foe, and win a great, epic battle. So they do it with their thumbs and it doesn’t even count.”

In his new book, Of Games and God: A Christian Exploration of Video Games, Kevin Schut, associate professor and chair of the department of media and communication at Trinity Western University in Langley, British Columbia, deals seriously with criticisms like these, addressing not so much the overreaching language but the assumptions behind them. And he does so with a large measure of grace, humility, and nuance.

The simple truth is that those not significantly invested in the world of video games often lack a point of reference to understand and interpret this artistic culture. Rather than condemning those who have genuine concerns about this new medium, however, Schut takes the time to work through what they may have missed—as well as the places where their impressions may be correct. 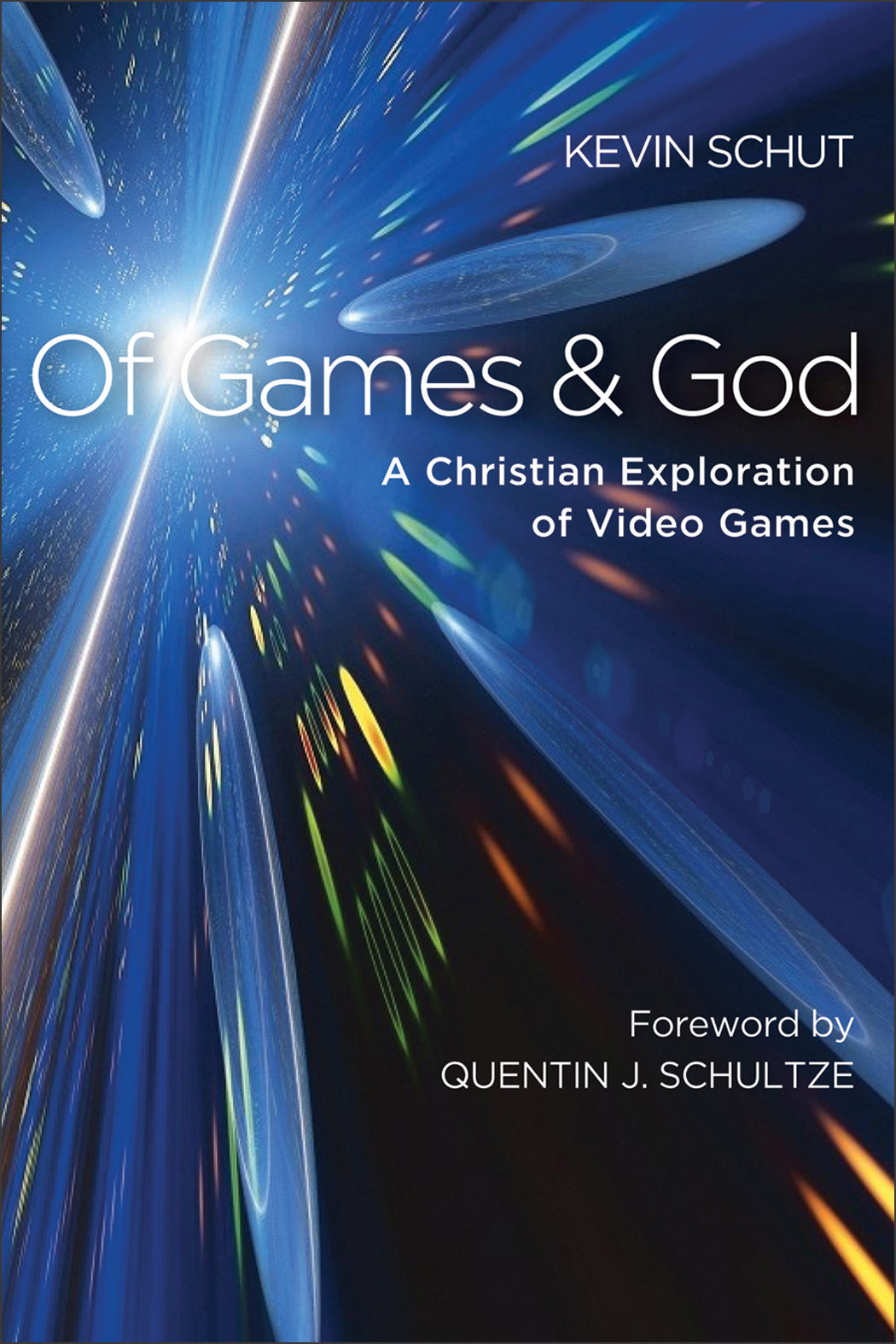 Kevin Schut, a communications expert and an enthusiastic gamer himself, offers a lively, balanced, and informed Christian evaluation of video games and video game culture. He expertly engages a variety of issues, encouraging readers to consider both the perils and the promise of this major cultural phenomenon. The book includes a foreword by Quentin J. Schultze.

There are a few obvious criticisms Christians level against video games: they’re too violent, too addictive, too pointless. Unfortunately, these transparently one-sided criticisms are also leveled against other misunderstood pastimes, particularly from those unfamiliar with them. So Schut spends a good bit of time dispelling a number of video game-related misconceptions. He demonstrates, for instance, that in-game violence isn’t always intended by the developer or engaged by the player as bloodthirsty glorification, that games don’t inspire anything close to the scientific definition of addiction, and that game playing itself can foster healthy creativity and intellectual exploration.

In addition to dispelling myths, however, Schut acknowledges and explores the complex nature of the medium’s many challenges. Some games, he clarifies, really do thrive off violent mayhem. Others do employ every trick in the book to nurture obsession. There is no doubt games can provide an incredibly attractive place for any sinner to escape from a mundane or unsatisfying life. Nevertheless, in chapter after chapter Schut interacts thoughtfully and extensively with these legitimate considerations, combining scientific research, experience, and biblical teaching to present a case resembling less of an argument and more of a methodical example of critical thinking.

In fact, Schut provides with Of Games and God the only extensive and balanced consideration of the medium I’ve yet seen. Not only is the book broad and open-ended enough to remain relevant for years to come, but it is also informed and nuanced enough to be taken seriously by thoughtful fans and critics alike. Both sides will find plenty here to consider. Schut’s chapter on fantasy and escape, for example, introduces a remarkable consideration of how video games can offer ideal opportunities for healthy imaginative play. In a particularly insightful section, he applies the fantasy-related viewpoints of Tolkien and Lewis to the task of discerning what video games can offer as a way of world exploration.

Of course, the key tension in any thoughtful discussion of video games is between the medium’s potential and its present reality. In the final chapter of the book, Schut discusses the ministry I serve as managing editor—Gamechurch. Though our online outlet regularly publishes video game criticism, we also attend gaming conventions, hand out “Gamer Bibles,” and are unafraid to tell players that Jesus loves them. It’s primarily an evangelistic ministry, aimed at planting the seeds of the gospel where there’s otherwise no interest. “I don’t know of anyone else who’s doing it nearly so well [as Gamechurch],” Schut writes. Nevertheless, he has issues with some of Gamechurch’s methodology.

On the other hand, as I look through the material, some of it strikes me as trying too hard. I’m sure the people who enjoyed it will see me as snooty (and I really don’t mean to be), but there are more profound ways to be edgy. Do we have to act and talk like this to convince people that we’re hip and thus able to speak to them?

At the time Schut wrote this chapter, Gamechurch was a brand new organization, still figuring out the balancing act of Christian involvement in video game culture. Schut rightly equates this balancing act (which he calls “The Challenge of Gamechurch”) to every believer’s struggle—not just with video games but with any medium and segment of culture: how do we remain in the world but not of it?

I joined Gamechurch because I saw an authentic willingness to deal directly with these questions and wrestle with how a Christian’s influence in the videogame world should look. In the year since I’ve joined, I’ve witnessed the ministry not only refine its strategy but also increase its industry influence, prompting game writers, developers, and players to reconsider their presumptions about Christianity.

Of course, outreach is only one of many reasons Christians ought to be open to video games. It’s imperative, though, that interested Christians consider how they can appropriate God-given values like creativity and exploration in the most spiritually nourishing way. Of Games and God enables readers to wrestle robustly with this question. Ultimately, when a Christian engages any media, especially the new and untested, cautious and thoughtful wrestling ought to be the default stance.

Richard Clark is editor in chief of Christ and Pop Culture, managing editor of Gamechurch, and a regular columnist at Unwinnable. You can follow him on Twitter.

2 Pregnant in a Pandemic: Coping and Hoping

3 5 Predictions for the COVID-19 Aftermath