As a professor at Houston Baptist University, each spring I guide a group of students through the Stoic Meditations of Marcus Aurelius. As part of that journey I always confess, to the surprise of many students, that if it could be proven Christ didn’t rise from the dead, I’d abandon Christianity and become a Stoic.

No matter what life throws at you, the Stoic knows how to handle it. That is why the three greatest Stoics were an emperor who ruled Rome at the height of her power (Marcus Aurelius), a Roman philosopher and playwright who performed the successive roles of tutor of, advisor to, and conspirator against Nero (Seneca), and a slave who later gained his freedom and set up his own philosophical school (Epictetus). Can one imagine three more different lives? And yet, all three ascribed to the same Stoic philosophy, gaining from it the same kind of solace, tranquility, and equanimity.

If it could be proven that Christ didn’t rise from the dead, I’d abandon Christianity and become a Stoic.

Though Aurelius’s Meditations is the best-known Stoic work, the most accessible, and the best place for the modern reader to start, is the Enchiridion (or handbook) of Epictetus. A. A. Long—professor emeritus of classics and literature at the University of California, Berkeley—offers a new translation of the Enchiridion, together with nine selections from his Discourses, in How to Be Free: An Ancient Guide to the Stoic Life, the newest addition to Princeton’s Ancient Wisdom for Modern Readers series. This volume ventures into the internal life, offering advice on how to find freedom within despite one’s external circumstances.

Although Epictetus won his freedom from slavery, Long explains, his advice on how to become free is neither political nor economic. The mind is “the one and only domain in which people can, if they so dispose themselves, be absolutely and unconditionally free, sovereign, and unimpeded” (xxvii). In the thought of Epictetus, the

principal burden of slavery shifts from the outer to the inner, from the physical to the mental, and philosophy not manumission becomes the source of liberty. You are enslaved . . . if you set your heart on anything that is liable to impediment, whether because your body lets you down, or passions and emotions have you in their thrall, or you attach your well-being to things that depend on others—people, property, popularity, or simply luck. (xviii)

Although Long concedes that Epictetus’s Stoicism may not fit today’s “fashion for authenticity, expectation, display of feeling, and self-assertion,” he then counters his concession by suggesting that Stoicism is “particularly applicable to our hectic world of social media, sound bites, validation, outrage, attention-seeking, and self-imposed anxiety” (xxiii).

Given the growing fear and free-floating angst across our nation—especially among young people whose smartphones provide them with a constant stream of anxiety-inducing events over which they have no control—a good dose of Stoicism may be just what the doctor ordered.

How much happier and more relaxed would we all be if we took to heart the opening lines of the Encheiridion, lines that sum up succinctly the foundation of Epictetus’s Stoicism: 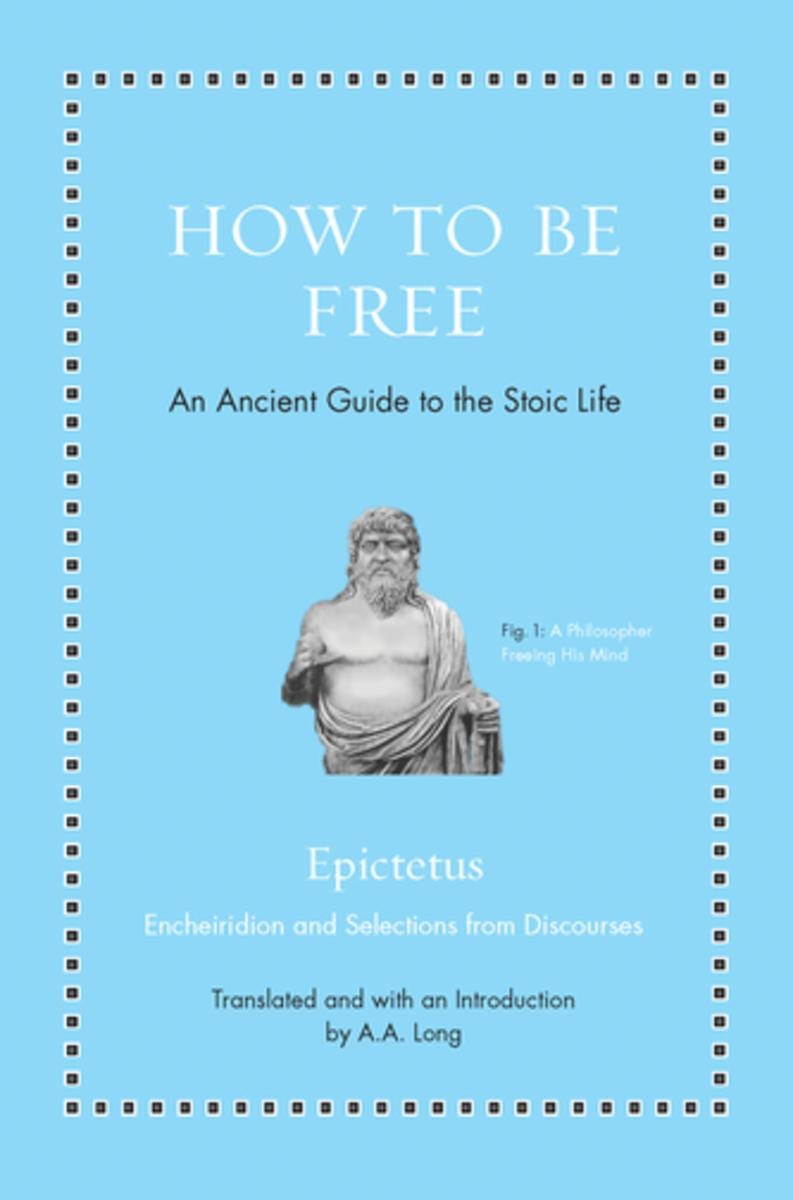 How to Be Free: An Ancient Guide to the Stoic Life

How to Be Free: An Ancient Guide to the Stoic Life

Born a slave, the Roman Stoic philosopher Epictetus (c. AD 55–135) taught that mental freedom is supreme, since it can liberate one anywhere, even in a prison. In How to Be Free, A. A. Long—one of the world’s leading authorities on Stoicism and a pioneer in its remarkable contemporary revival—provides a superb new edition of Epictetus’s celebrated guide to the Stoic philosophy of life (the Encheiridion) along with a selection of related reflections in his Discourses.

The strength of Long’s vigorously colloquial but never dull, chatty, or excessively informal translation can be seen in his use of the phrase “up to us.” Rather than translate the Greek phrase as “within our power” or “under our control,” as most translators have done, Long chooses to give Epictetus a contemporary, slightly edgy feel without sacrificing his timeless appeal or his simple dignity and gravity. Here are some other “quotable quotes” from Epictetus that Long renders in a fresh, punchy style:

Over the last decade, psychologists and counselors have increasingly, and wisely, advised their patients to distinguish between the things done to them, which they can’t control, and their reactions to those things, which they can and do control. Such advice lies at the core of Epictetus, and Long’s colloquial translation helps draw that out in a way that is both theoretical and practical.

Increasing the book’s usability are its attractive, economical size and shape; it can be comfortably held in one hand or tucked in a pocket. As an added bonus for the classical scholar, Epictetus’s Greek and Long’s translation are printed on facing pages. These features make it an ideal gift for the serious student of the classical world or the general reader in search of tips for achieving balance and equanimity in our modern hectic world.

The Christian reader will be struck by the many moral-ethical parallels between Epictetus’s handbook and the teachings of the New Testament, which was completed a generation or so before the Encheiridion was assembled.

The Encheiridion lays down rules that read like a pagan version of the Sermon on the Mount (Matt. 5–7), especially when Jesus instructs his disciples to stop worrying about food, drink, and clothing: partly because our heavenly father will supply us with those things; partly because no one, by worrying, can add a single hour to his life (6:25–34). Epictetus’s tone and approach, meanwhile, recall Paul’s triumphant proclamation that he has “learned in whatever situation I am to be content. I know how to be brought low, and I know how to abound. In any and every circumstance, I have learned the secret of facing plenty and hunger, abundance and need” (Phil. 4:11–12).

The Stoics knew well how to adapt themselves to all situations, whether good or bad, but they lacked the further revelation of a loving and involved God who knows what we need, cares about what we need, and supplies what we need.

That “secret” of which Paul speaks was known to the Stoics, but only in part. The Stoics knew well how to adapt themselves to all situations, whether good or bad, but they lacked the further revelation of a loving and involved God who knows what we need, cares about what we need, and supplies what we need.

Both the Stoic and the Christian look inward; however, while the former finds only an impersonal inner light to guide him, the latter finds the Holy Spirit of God indwelling him.

Stoicism may afford us some rest and peace in the present darkness of our world, but it lacks the power or wisdom to point us to a final rest that transcends worldly troubles and that will fulfill the true and proper desires placed in us by our Creator.

Louis Markos, professor in English and scholar in residence at Houston Christian University, holds the Robert H. Ray Chair in Humanities. His 25 books include On the Shoulders of Hobbits: The Road to Virtue with Tolkien and Lewis, From A to Z to Middle-Earth with J. R. R. Tolkien, and Tolkien for Beginners.