By grace alone, through faith alone, in Christ alone, according to Scriptures alone, to the glory of God alone. These five solas have been at the core of Protestantism’s doctrine of salvation since the Reformation. In recent years these truths have been revisited—reasserted by some, revised by others.

For instance, John Piper and N. T. Wright have traded arguments and books on the topic of justification. In 2011 the Evangelical Theological Society (ETS) meeting devoted itself to the same subject. In addition to these recent discussions, many others works have been written. Therefore, a book surveying the various positions on salvation, faith, and works is needed. Enter Zondervan’s new Four Views on the Role of Works at the Final Judgment.

Alan Stanley recruited a solid team of contributors. Robert Wilkin is the executive director of the Grace Evangelical Society and author on the subjects of salvation, faith, and works. Thomas Schreiner is a leading Pauline scholar who has written numerous works on Paul, the law, and the role of works in salvation. James Dunn is a well-respected British scholar who has written widely on Jesus, Paul, and New Testament theology. Last, Michael Barber is a professor at the Great Catholic University and author of several books.

As Stanley, lecturer in biblical studies at Australia’s Brisbane School of Theology, notes, the purpose of Four Views on the Role of Works at the Final Judgment is not to answer every question but to provide greater focus and direction for those questions (203). In this respect the book is effective. It presents four divergent approaches to the role of works at the judgment seat, and through the format of argument and response the strengths and weaknesses of each position are highlighted.

A few key points of discussion are worth noting. First, Robert Wilkin’s chapter stands against the other three because he—unlike the others—denies any place for works in the final judgment. For anyone accustomed to the teaching of Lordship salvation, his statement that “no perseverance is required” (27) is startling. “Christians can fail to endure, fall away, and prove to have been wicked,” he later writes. “Salvation is based on faith in Christ, not faithful service for Christ” (29, emphasis his). For Wilkin, saving faith is a singular response of mental assent that requires no accompanying obedience (39). 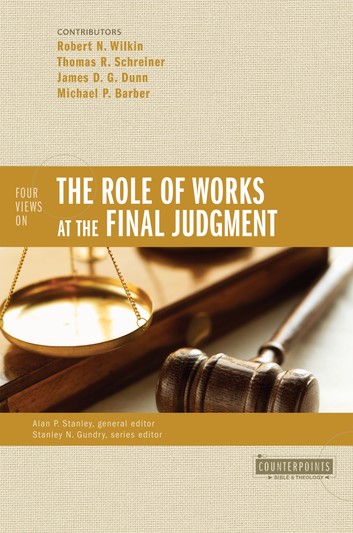 Four Views on the Role of Works at the Final Judgment

Four Views on the Role of Works at the Final Judgment

By contrast, Schreiner, Dunn, and Barber all make a place for works at the judgment seat, albeit in different ways. Dunn disallows a unified New Testament theology of salvation; for him, each New Testament author has a disparate view of grace, faith, works, and how they fit together. Barber is more theologically optimistic. He affirms the necessity of grace in salvation but argues works are meritorious for salvation, too. On balance, Schreiner contends that works are both ineffective for salvation and necessary as evidence for salvation.

This is the second surprising observation. In isolation, some of Schreiner’s comments could seem to place too much stress on works. For instance, he observes, “Paul teaches [in Romans 2:28–29] that works play a role in the final judgment. They are necessary for salvation” (81). Later, he writes, “The necessity of obedience for salvation is not restricted to Romans 2. In fact, it is a common theme in Paul” (82). And again, commenting on Philippians 2:12: “Paul emphasizes that believers must accomplish their own salvation” (87).

Yet, make no mistake, Schreiner balances the necessity of good works with their Spirit-wrought origin. He denies any effort achieved by human virtue as meritorious for justification (83, 87, 91), and he rightly couples grace with works, always emphasizing the former as the source of the latter. Nevertheless, Schreiner’s view argues seriously for the “necessity” of works as a fruit that evidences salvation. For him, the “consequence of being a new creation” is to produce fruit that gives evidence of salvation (97).

Interestingly, Schreiner’s strong affirmation of works puts him against Wilkin, the only other self-described evangelical in the book. One might think that as evangelicals who share a concern that “faith alone saves” (51), their conclusions would stand closer together. However, the opposite is true. Schreiner stands closer to Dunn and Barber because he, like them, seeks to incorporate all of the biblical data. This comes as a pleasant surprise to Dunn (105), who’s perhaps seen too many evangelicals quickly explain away Romans 2 and James 2.

This leads to a third and final point. Schreiner and Barber both strongly affirm the place of grace in salvation, while also calling for human works. In Schreiner’s case, he explains human good works in terms of the new creational realities accompanying salvation under the new covenant. Barber makes a similar argument, but he contends every good work done by Christians is actually the work of Christ in them. To deny the merit of these works, he argues, is actually to deny the work of Christ. In this sense, Barber presents his view such that God appears to get all the credit.

At first it might sound like this Catholic is experiencing his own Protestant Reformation, but of course this isn’t the case. Though Barber may attempt to gain Protestant support by retracing his evangelical education (162), Schreiner explains how Barber’s position is worlds apart from historic Protestantism:

There is certainly common ground between Catholics and Protestants, for we both affirm the grace of God. Still, the devil is in the details. Or perhaps it is better to say that the meaning of words like “merit” and “reward” have to be placed in a larger theological context. In Catholic theology, merit is part of a system in which the sacraments play a crucial role in salvation, so that justification receives a definition quite different from what we typically find in Protestant theology. For instance, Catholic theology teaches that justification is a process that continues throughout one’s life. (194)

This paragraph makes an important distinction that’s less explicit in the rest of the book. Though Schreiner rightly conveys the substantive confessional difference between Roman Catholic and Protestant soteriology, Stanley merely presents Barber’s view as one of four equally “good models” (210). Exegetically, Barber’s chapter contributes much to the discussion. And while there’s certainly a place for Protestants and Catholics to discuss their views of grace, faith, and works, I fear that the book’s overall effect blurs the historical distinctions.

With that caveat in place, Four Views on the Role of Works at the Final Judgment ably introduces four approaches to grace, faith, and works. While its weakness may be in the way it minimizes historical differences between Protestants and Catholics, its strength comes in its engagement with Scripture. Each contributor unpacks numerous biblical passages such that the reader gets a full view of how exegesis determines theology. In this exegetical approach, the book succeeds in showing where the conversation is today as well as what questions remain. If you’re looking for a resource that surveys the exegetical arguments related to the role of works at the final judgment, look no further than this volume.

5 In Praise of Uncomfortable Friendships