My junior year in high school I picked up the habit of listening to the preaching of Charles Stanley. Most afternoons on the way home from school the dial on my family’s 1979 Corolla was set to 830 AM, and I listened to his baritone southern cadence. It’s not surprising then, that one of the first Christian books I purchased on my own was Stanley’s freshly printed The Wonderful Spirit Filled Life. Fifteen years later, Chan’s Forgotten God: Reversing Our Tragic Neglect of the Holy Spirit took me right back to that book.

Now, it’s unlikely those who pick up Chan’s book will have read Stanley’s. Perhaps equally as unlikely is the fact that an old school Baptist preacher born and bred in the South and this cutting-edge Chinese American leader who is Californian through and through would deliver the same thesis: The American church has neglected the Holy Spirit and needs to reclaim an understanding of and a responsiveness to the Spirit and his work.

Chan’s message in the book is consistent with the concerns he has voiced (and acted upon) publicly: “The light of the American church,” Chan says, “is flickering and nearly extinguished, having largely sold out to the kingdoms and values of this world” (17). American affluence has created spiritual cataracts on our eyes, and we’re in need of a radical answer to the crisis. Chan responds with a simple solution: “I believe that this missing something is actually a missing Someone-namely, the Holy Spirit” (16).

Chan doesn’t believe our problem is fundamentally theological in nature. He likens the American church to the freshwater spring in James 3:11 that pours forth saltwater. Our problem is one of faith-response to the Spirit of God. We say we are born anew and yet the Spirit sits stultified on our theological mantles and not living and active in our hearts. “What are we afraid of?” Chan asks. Perhaps we’re afraid that God might not come through, but even deeper, Chan believes, is that we’re afraid that God will come through and call us to a radical Spirit-led life.

Chan then spends a chapter working out a theology of the Spirit in which he tries to tread some middle ground between those conservative churches who “may quench the Spirit by ignoring His working” (56) and those charismatic churches who tend to “practice prophetic utterances” without rejecting false prophets and prophecies “by calling them out on their biblical inconsistencies” (56). Chan also spends some time fleshing out what a theology of Spirit response might look like.

The final four chapters are spent reflecting on what our response to the Spirit ought to be. Seeking the Spirit, Chan says, ought to be driven by seeking God himself: his holiness and godliness, and the accompanying fruit he gives us (love, joy, peace, etc). This stands in contrast to those who seek the Spirit to seek out his miraculous gifts or those who seek the Spirit to seek out the “will of God.” One of Chan’s fundamental calls in these chapters is for us to turn to the Spirit in prayer and in committing our lives and concerns to him. 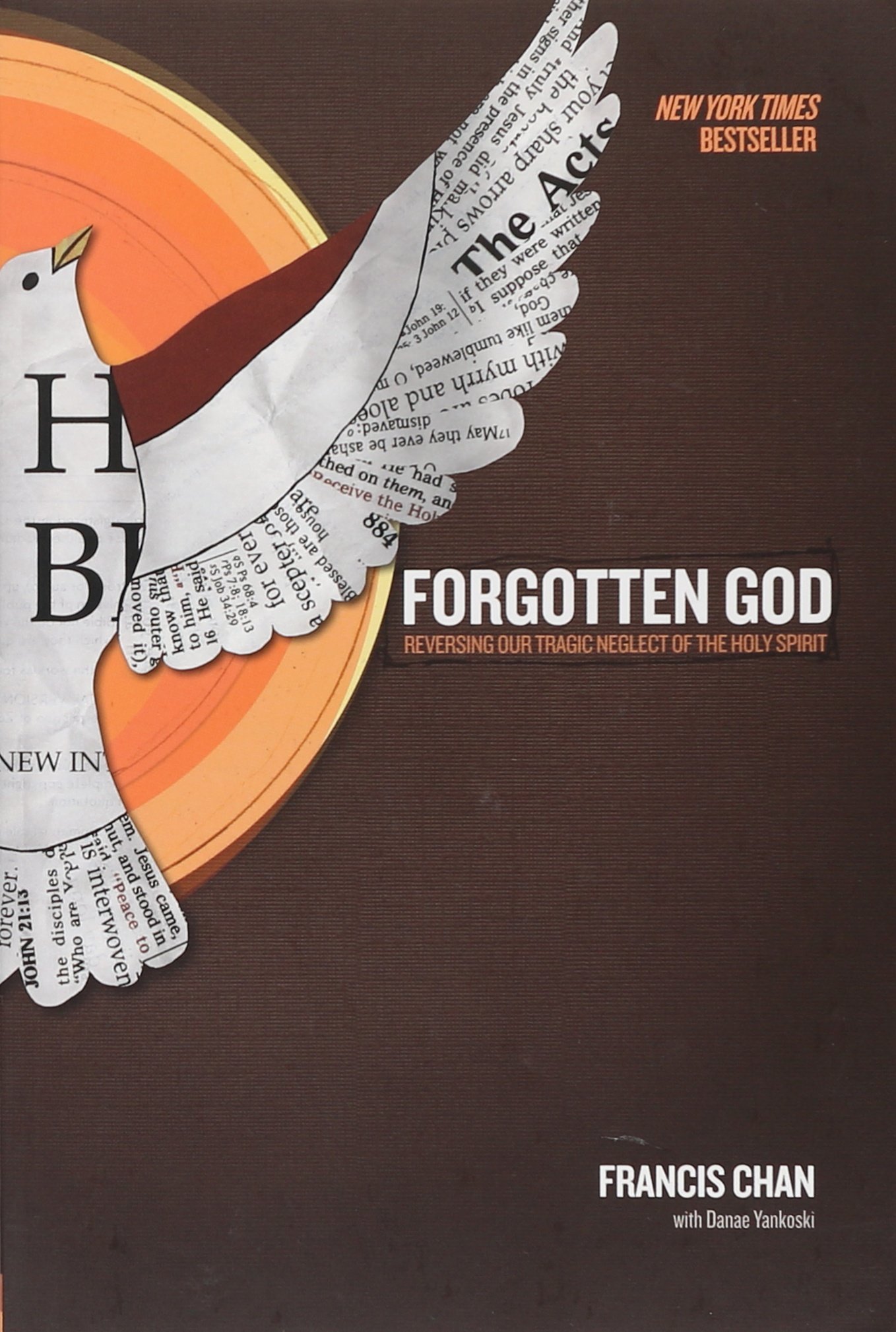 Forgotten God: Reversing Our Tragic Neglect of the Holy Spirit

Forgotten God: Reversing Our Tragic Neglect of the Holy Spirit

A follow up to the profound message of Crazy Love, Pastor Francis Chan offers a compelling invitation to understand, embrace, and follow the Holy Spirit’s direction in our lives.

In the name of the Father, the Son, and . . . the Holy Spirit. We pray in the name of all three, but how often do we live with an awareness of only the first two? As Jesus ascended into heaven, He promised to send the Holy Spirit—the Helper—so that we could be true and living witnesses for Christ. Unfortunately, today’s church has admired the gift but neglected to open it.

Chan’s book is deeply practical and personal. Each chapter ends with a story of a different friend of Chan’s who has responded to the Spirit in a radical way. And like so much Chan writes about and preaches on, he is always holding up his own life and his church to the light and considering what dramatic changes he needs to make. As with Crazy Love, this makes Chan both authentic and trustworthy as an author. Those who read Chan will inevitably be inspired to follow Chan’s bold faith.

Despite my high esteem for Chan, there were several components of the book that I felt could have been significantly improved. The first is the basic argument itself. Chan argues that we have neglected the Holy Spirit. Almost always, Chan frames this argument around our neglect in terms of responding to the Spirit, which I think is spot on. But there are times where Chan at least implicitly argues that we have improperly neglected the Spirit as an area of focus in the church. And he doesn’t hold up a simple but important truth that the Spirit’s purpose is to point to the Son (John 14:26; 1 John 4:2).

This leads to the second component of the book I felt could have used improvement. In the book, Chan admirably tries to bridge the charismatic-conservative divide in terms of our study of and response to the Sprit. In so doing, Chan tends to downplay some significant debates (“I don’t want to get caught up in abstract and nebulous distinctions” [65]) pushing us to consider instead just those “theological issues that shape our faith and behavior” (65). That is a noble intention, and Chan does well in not turning his book into a theological textbook, but I think he’s pushed too far the other direction. Take, for example, his contention that “it’s needless for us to debate about when the Holy Spirit becomes a part of someone’s life” (68). On the contrary, the debate about when one is or isn’t filled with the Spirit and how one can or cannot lose the Spirit are of the utmost importance as we consider the security of our relationship with God and what he requires of us and calls us to. I appreciate why Chan didn’t want to get caught up in the minutiae, but I think that he really could have served his readers better by discussing some of these important issues that have a direct impact on our faith and our life with God.

Despite some weaknesses, this is a book I would recommend to readers at all levels of spiritual maturity. The book may not build as sturdy a theological foundation as I might have liked, but I do believe that God will continue to use it as he has used all of Chan’s ministry, to ‘build His church, an unstoppable force, empowered and sustained by the Holy Spirit” (156).

John Beeson serves as co-lead pastor at New Life Bible Fellowship in Tucson, Arizona. He attended Gordon College and Princeton Theological Seminary, and is married with two kids. He blogs at The Bee Hive.