For nearly a century Eric Liddell has been one of the English-speaking world’s most well-known Christian athletes. The Scottish sprinter’s fame spread worldwide in 1924 when he followed his Sabbatarian beliefs, skipping the Olympic 100-meter event (which he was favored to win) since it was scheduled for a Sunday. Liddell received criticism from high places in Britain for his lack of “sportsmanship” and “patriotism,” but he stood fast—and ran fast, too. He added the 400-meter race to his repertoire, which he proceeded to win despite barely training for it.

Liddell’s religious convictions and Olympic gold made him a hero for Christian athletes over the next few decades, although the memory of his accomplishments faded over time. That trend was reversed in 1981 with the release of Chariots of Fire, an Oscar-winning film that told the story of Liddell’s Olympic victory. For Christian moviegoers Liddell became an iconic figure, as did his character’s oft-quoted line: “I believe God made me for a purpose—for China. But he also made me fast, and when I run, I feel his pleasure.”

Since 1981 there have been a handful of biographies of Liddell. All describe the 1924 Olympics. Many also highlight the story after 1924, when Liddell eschewed glory and riches and opted instead to join his father and mother in China as a missionary. Most of these biographies are devotional and intended for an evangelical audience. With Duncan Hamilton’s For The Glory: Eric Liddell’s Journey from Olympic Champion to Modern Martyr, however, we have a full-length, mass-market biography of Liddell.

For the Glory’s publisher, Penguin Press, is aiming for the audience that made Laura Hillenbrand’s Unbroken a hit. Like Unbroken [article], For the Glory is an inspirational biography that features a runner, World War II, and Jesus (the last comes in even heavier doses). As for the author, Duncan Hamilton isn’t widely known in the States, but he’s supremely talented, having twice won the U.K.’s top sportswriting award. His narrative ability is apparent in For The Glory as he traces Liddell’s life across four decades and three continents.

Hamilton divides his book into three sections. The first moves from Liddell’s birth in China through his Olympic triumph in 1924. In between Hamilton discusses Liddell’s family, education, interest in athletics, unorthodox running style, and relationship with his athletic mentor (Tom McKerchar) and spiritual mentor (D. P. Thompson).

The second section details Liddell’s life after the Olympics until 1941. Liddell spent most of his time in China, first as a teacher at the Anglo-Chinese College in Tientsin, then as a country evangelist based in Siaochang. Liddell married during these years and began a family of his own. He also operated within the context of upheaval and unrest wrought by civil war and the Sino-Japanese War. 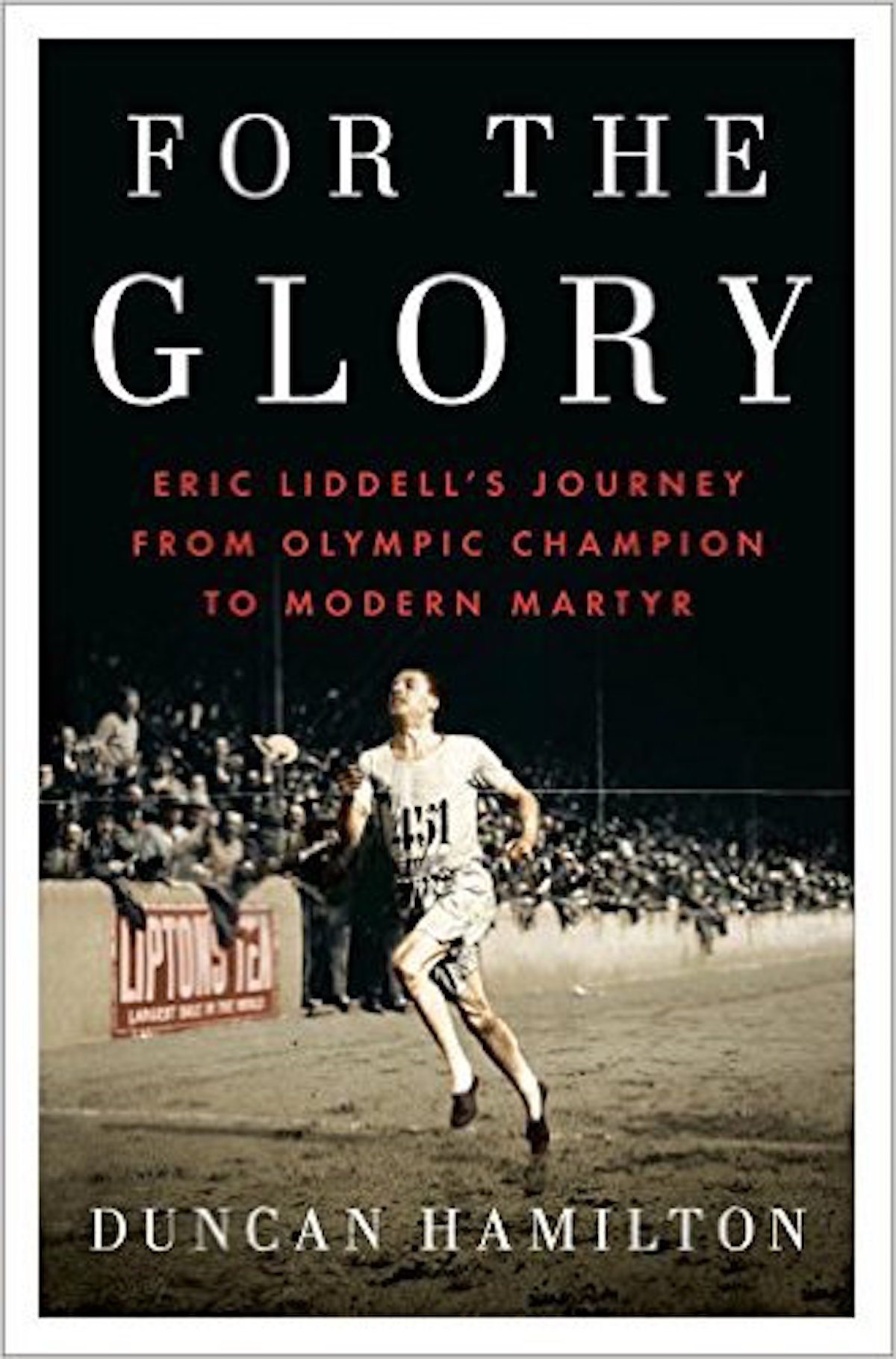 For the Glory. Eric Liddell's Journey from Olympic Champion to Modern Martyr

For the Glory. Eric Liddell's Journey from Olympic Champion to Modern Martyr

In the final section Hamilton devotes his attention to Liddell’s life under Japanese confinement during World War II. Liddell’s wife and three daughters—one not yet born—were safely dispatched to Canada in 1941, but Liddell remained in China under the watchful eye of Japanese authorities. In 1943 he and a motley crew of civilian noncombatants were sent to an internment camp where Liddell lived out the final two years of his life. He died in 1945 of a brain tumor, months before the end of the war.

Throughout the book Hamilton portrays Liddell in heroic tones, but in the final section he really lays it on thick. “Liddell’s character and his beliefs never allowed him to be depressed or negative,” Hamilton writes, “irrespective of the hardships.” Hamilton seems to have good reason for such an assessment, based as it is on accounts from those who lived at the camp and who overflow with praise for Liddell’s integrity and unselfishness. Indeed, Liddell’s sterling character shines through to such an extent that it’s not at all diminished when Hamilton dismisses as false one story—supposedly, Winston Churchill managed to secure Liddell’s release from the internment camp, but Liddell gave his spot to a pregnant woman instead.

Although Liddell comes through without a blemish, Hamilton at least attempts to contextualize Liddell’s heroism. That is, rather than focusing entirely on Liddell’s heroic decisions—to skip the 100 meter event, or to remain in China even as war raged on around him—Hamilton highlights the larger processes at work that forced Liddell to make such decisions. Suffice it to say the bureaucracy of the British Olympic Association and the London Missionary Society don’t receive high praise.

Liddell’s Faith and Its Influencers

As for Liddell’s faith, it’s consistently present throughout For the Glory. In Hamilton’s telling, Liddell was no religious killjoy. He blended a rich devotional life and desire to serve God with a love of fun and people. The Sermon on the Mount (Matt. 5–7) loomed large for Liddell as the foundational guide to Christian living. Liddell preached the importance of surrender to God and of applying biblical principles to everyday life.

Hamilton describes some of Liddell’s theological influences, but his analysis isn’t robust. For example, Hamilton notes that in the 1920s Liddell embraced the teachings of Frank Buchman, founder of the Oxford Group movement. He also mentions Liddell was profoundly influenced by the writings of E. Stanley Jones, an American Methodist missionary.

Both Buchman and Jones engendered considerable controversy in their day. Historian David Bebbington has described the Oxford Group, prominent in the 1920s and 1930s, as an “undoctrinal” movement that emphasized life change above all else. In the States, Buchman’s teachings managed to draw the ire of both modernists connected to the Christian Century and conservative Reformed theologians associated with J. Gresham Machen. Jones, meanwhile, attempted to straddle the line between fundamentalists and modernists but was more widely embraced by the latter. Unmentioned by Hamilton is another American author Liddell admired: liberal Protestant popularizer par excellence Harry Emerson Fosdick.

It’s understandable that Hamilton doesn’t dive into more detail when it comes to these influences on Liddell. He’s writing for a popular audience, and he’s an expert in sports history, not religion. Still, given Liddell’s popularity among American evangelicals and given the antagonistic or ambivalent stance American evangelical leaders have taken toward Liddell’s favorite authors, a deeper look at those sources would’ve been particularly interesting.

In the introduction, Hamilton describes his recent visit to a monument built in China to honor Liddell. Standing in front of the monument, he is overcome with awe:

How do you pay proper respect to a man as humane as that; a man, moreover, who strove every day for perfection in thought, as well as deed, and whose death engulfed those who knew him in a sadness almost too deep for words?

The next lines reveal Hamilton’s answer. He does “the best [he] can” and places flowers on the base of the granite monument. Reading For the Glory, one gets the sense that Hamilton’s book itself is another way for him to pay proper respect to Liddell.

Perhaps the praise is overly effusive, and religious historians may wish Hamilton had a better sense of the theological landscape of Liddell’s time. But Hamilton succeeds in providing a detailed and vivid account of Liddell’s life, one that should have wide appeal.

With this book and the forthcoming release of a film about Liddell’s post-1924 life, the spotlight is bound to shine on Liddell with more intensity than at any time since Chariots of Fire 35 years ago.

2 Prince Harry’s ‘Spare’ and the Spirit of the Age

5 In Suffering, God Isn’t (Simply) Teaching You a Lesson

Opposing Gay Marriage May Seem like a Lost Cause. History Suggests It Isn’t.