Kurt Anderson’s Fantasyland: How America Went Haywire is one of the bestselling and most discussed books of the year.

In this fast-paced and provocative work of revisionist history and diagnostic journalism, Anderson argues that Americans have recently become untethered from reality and that Trump’s election represents the high point of our collective delusion.

More importantly, Anderson argues Americans should come to grips with the fact that we’ve always been willing to believe nearly anything, having been beholden to magical thinking from the beginning. 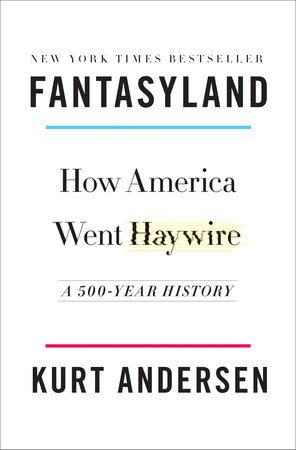 When did America become uncoupled from reality? In Anderson’s account, we were already losing our grip when our nation was founded. Although school teachers tell the story of our founding with almost exclusive reference to the Pilgrims, America’s real founding fathers were the Puritans, members of a “nutty religious cult” who believed in “fantasies” such as Christ’s second coming. America’s religious hucksters, Anderson avers, made us uniquely susceptible to fake news. He offers many colorful examples as evidence, including early America’s widespread acceptance of national myths such as George Washington’s cherry-tree incident and its embrace of quack medicine, homeopathy, and mesmerism.

After the Civil War, he says, a deep divide opened between “moderns” committed to reason and reality, and “committed magical thinkers” closed to reason and immune to reality checks. Thus, in Anderson’s interpretation, the United States became an increasingly lush environment for the growth of falsehoods, magical thinking, and fantasy acceptance.

The 1960s accelerated the onset of our collective neurosis. The sexual revolution taught Americans that morality is relative and that each of us should “do our own thing.” For the first time in world history, an entire society cooperated with young people’s belief that the universe revolved around them. In this case, the youth reckoned that if Americans would just grow pony tails, wear Levi’s, and smoke rope, we’d be liberated from traditional social and moral norms that enslave and make us miserable.

In the 1970s, fantastical beliefs really took hold. As evidence Anderson cites several bestselling books, including The Secret Life of Plants, which supposedly demonstrated the emotional and spiritual relations between plants and humanity, and My Story, the autobiography of the young spoon-bender and mind-reader Uri Geller. Also in the 1970s, postmodernism began to flourish in the academy, teaching that “reality” is a social construction—that all truth claims are merely attempts to seize power for special interest groups.

During the same decade, the Left and the Right developed their own special versions of “crazy.” On the Left, the Weathermen promoted violence and social revolution, arguing that “dope is one of our weapons. . . . Guns and grass are united in the youth underground.” Various factions of the New Left went on to seek revolution through violence, setting off thousands of bombs during that decade. On the Right, America saw the formation of groups such as the John Birch Society, whose members believed the leadership of both major political parties had been infiltrated by Soviet agents ushering in a Kremlin-ruled American police state.

This fantastic way of interpreting the world made it easy for American citizens of both political parties to buy into conspiracy theories about JFK’s 1963 assassination. Similarly, it was easy for Americans to believe in UFOs and in the American government’s purported elaborate coverup of UFO sightings.

In the 1980s, it seemed America had regained some social equilibrium, but this false sense of relief concealed the fact that fantastical thinking was the new normal. The professoriate had bought into metaphysical and moral relativism. The public continued to buy into conspiracy theories. Citizens claimed to have been abducted by aliens. And none of this lunacy seemed as crazy as it would have two decades before.

In the 1990s, as Anderson sees it, the Right became more untethered from reality than the Left did. Once Republicans overthrew the Fairness Doctrine, which kept media shows from being ideologically one-sided, right-wing radio and television shows cropped up all over the nation and in every time slot on the airwaves. No longer held accountable to articulate both sides of an issue, these shows were set free to create echo chambers for their listeners.

Compounding matters, the internet’s ascendance enabled cockamamy ideas and falsehoods to spread instantaneously and globally, creating myriad alternative realities in which persons could live and move and have their being. Search engines gave prominence to beliefs and theories based on the preferences of internet users, rather than evidence or plausibility. The information age has enabled conspiracy theorists, crackpots, liars, and demagogues.

So how widespread is America’s promiscuous devotion to the untrue? Anderson thinks the majority of Americans are untethered from reality; we’re a nation in which “opinions and feelings are the same as facts.” As evidence, he observes many Americans believe the Genesis creation account is God’s word, demons and angels are active in this world, and heaven is real. As further proof, he offers evidence that most Americans are skeptical about evolution and climate change and that many Americans think ghosts and telepathy could be real.

America’s collective magical thinking, Anderson opines, has coalesced to distort its cultural institutions, such as media and the universities; thus the very institutions that should discourage fantastic thinking have, in fact, enabled it. Consequently, fantasies and delusions have moved from the fringes to the respectable center.

In terms of contemporary politics, Anderson thinks the Right is far more untethered than the Left is. He blames Christianity again, citing the GOP’s greater number of Christian believers and, at the same time, greater number of conspiracy theorists. As he sees it, the reality-based Left gained the upper hand in the 1960s and ’70s, achieving civil rights, environmental protections, equality for women, and legal abortion. In the 1970s and ’80s, the political center shifted to the Right, where reality-based conservatives gained some victories such as the collapse of the Soviet Union and the radical reduction of violent crime. By the 1990s, however, the GOP was full of fantastical thinking. Untethered from reality, its fringe elements took command of the party’s center, where they have remained to this day.

How should we evaluate Fantasyland? Is Anderson right in his interpretation of American history? Or is he guilty of some fantastical thinking of his own? The answer is somewhere in-between.

We should approach a revisionist journalistic history like Anderson’s at least as suspicious as we are of the national founding myths he criticizes. If founding myths err via unctuous flattery, revisionist histories err via cynical disparagement. Revisionist histories might expose painful truths, but they also tend to present the truth partially and with a jaundiced eye. Usually, revisionist historians obsess on one flawed aspect of a nation’s history and use it as a club to beat down even the best aspects. Howard Zinn’s A People’s History of the United States is one example, making “bloodthirsty colonization” a defining personality trait of America. Anderson’s Fantasyland is another example, foregrounding “fantastical thinking” as a distinguishing characteristic.

Things He Got Right

But Anderson is right about many things. He’s right the United States has become increasingly untethered from reality, especially during the last half-century. The 1960s did give American youth social permission to deify their individuality and applauded them for taking that individuality in immoral directions. The 1970s were characterized by violence on the Left and conspiracy theories on the Right. The relative calm of the 1980s did betray the fact that crazy was the new normal. The 1990s did give birth to media outlets and internet sites that gave credence to a panoply of cockamamy ideas, half-truths, and falsehoods that spread instantaneously and globally, creating alternative realities in which many Americans now live.

Anderson is also right to recognize that the 2016 election cycle was a national dumpster fire in which both major-party nominees exhibited a loose relationship with the truth, media outlets across the spectrum peddled half-truths and conspiracy theories, and a plurality of Americans handicapped their critical faculties by limiting their news or opinion intake to one exclusive source (e.g., CNN, Fox News, Breitbart, Buzzfeed).

Things He Got Wrong

But Anderson is irresponsibly wrong with many of his accusations. Consider, for example, his treatment of Christianity. He exhibits either ignorance, intellectual laziness, or bad will when he flings about papier-mâché caricatures of Christianity, mocks the Puritans as a “nutty religious cult,” dismisses Christ’s second coming as “fantasy,” and treats clergy on the same level as quack doctors and carnival barkers. Is Anderson so deluded that he can’t distinguish between historic Christianity and popular superstition? Between the historic Christian convictions of, say, President James Madison on the one hand, and the pop-level quackery of Uri Geller on the other?

Anderson is also wrong to locate delusion mostly on the Right. Don’t get me wrong: as a conservative I recognize that the Right does have a cornucopia of problems, including our susceptibility to conspiracy theories, immunity to partial truths and falsehoods, and penchant for dwelling in echo chambers.

Trump’s election does reflect those problems. Before the 2016 election cycle, Trump had been known as a Hollywood entertainer, playboy, brand marketer, and “birther” conspiracy theorist. During campaign rallies and debates he “winged it,” saying whatever came to his mind. At one point, Politifact estimated that 2 percent of his statements were “true,” and only 7 percent “mostly true.” The rest fell somewhere in the “half true” to “pants on fire lies” range.

Think about it. During the campaign, he implied most Mexican immigrants were rapists and murderers, called network anchor Megyn Kelly a bimbo, compared Ben Carson to a child molester, mocked POW John McCain for being unable to evade capture, ridiculed Jeb Bush for having a civil demeanor during the primary debates, and told reporters it didn’t matter what he said or did since his supporters would remain loyal even if he shot somebody in the middle of 5th Avenue. Trump was right: a large portion of his base would support him uncritically, no matter what he said or did.

Yet Anderson’s biases cause him to overlook the fact that candidate Trump recognized some realities other Republicans and Democrats didn’t recognize or emphasize: the economic hardship and cultural dislocation experienced by working-class citizens, and the apathy or condescension they experienced at the hands of the Republican elite. Anderson also overlooked Hillary Clinton’s severely compromised relationship with the truth, and Democratic voters’ willingness to vote for her no matter what she’d said and done over the course of her besoiled career.

In sum, Anderson has given us a well-written and fast-paced book. But as a work of revisionist history and diagnostic journalism, Fantasyland is only partly successful. Anderson himself seems to have a questionable relationship with reality, conflating Christianity with superstition and underemphasizing the collective delusion exhibited by the political Left. Then again, I guess that’s what we should expect if America has, in fact, lost its mind.

Bruce Ashford serves as provost and professor of theology and culture at Southeastern Baptist Theological Seminary. He co-authored One Nation Under God: A Christian Hope for American Politics (with Chris Pappalardo) and is the author of Every Square Inch: An Introduction to Cultural Engagement for Christians and Letters to an American Christian. You can follow him at www.BruceAshford.net and on Twitter.

3 Should Followers of Christ Use Recreational Marijuana?

5 How to Teach Your Teen to Study the Bible

Have We Missed the Honor-Shame Focus in Scripture?

The Ten Commandments of the God of Consumerism