Tim Grass is well-versed in the history of the Plymouth Brethren, authoring and editing multiple volumes on the ecclesial group to which his subject, F. F. Bruce (1910–1990), belonged. Bruce was a household name in evangelical biblical scholarship a generation ago and perhaps the best-known Brethren member internationally in the 20th century. Two decades after his death, his memory is naturally fading. Grass has performed an important service in collecting data and telling Bruce’s story while many who knew him are still alive in F. F. Bruce: A Life.

Church historian Mark Noll (Notre Dame) and New Testament scholar I. Howard Marshall (University of Aberdeen) furnish glowing commendations of this book. The praise is justified. While this is not a ponderous volume (like, say, the biographies of Jonathan Edwards by George Marsden or Iain Murray), it is nevertheless substantial. Grass has enhanced readability and practical utility through features like 16 meaningful photographs interspersed throughout, a chronology of Bruce’s life (228–229), and a comprehensive bibliography of Bruce’s writings (230–265). For those wishing to delve more fully into Bruce’s work and its reception, there is also an impressive collection of “Other Items” (266–278) that lists a full range of secondary sources, including works, obituaries, and websites that shed more light on Bruce than a succinct biography can.

The body of the book consists of nine chapters covering Bruce’s life chronologically, beginning with his childhood and adolescent years (chs. 1–2). Grass then treats Bruce’s various stints of university study at Aberdeen, Cambridge, and Vienna, leading to his first academic post at Edinburgh in 1935 (ch. 3). The next four chapters trace Bruce’s scholarly labors at university positions in Leeds (1938–47), Sheffield (1947–59), and finally Manchester (1959–78). Grass devotes an entire chapter (ch. 8: “Books and the Book”) to Bruce’s views on and publications about Scripture. The penultimate chapter treats Bruce’s busy and productive retirement (ch. 9).

The final chapter is “Legacy and Evaluation.” At key junctures throughout, Grass gives full and helpful coverage of Bruce’s key roles in the rise of Inter-Varsity Fellowship and Tyndale Fellowship in the difficult years during and after World War II. Among Grass’s concluding observations is Bruce’s twofold influence on the evangelical world. First, “he paved the way for widespread evangelical acceptance of critical methodologies as having a part to play in reverent and submissive biblical study”; and second, he gave impetus to “wider academic acceptance of evangelicals as genuine scholars,” particularly in Britain (217). 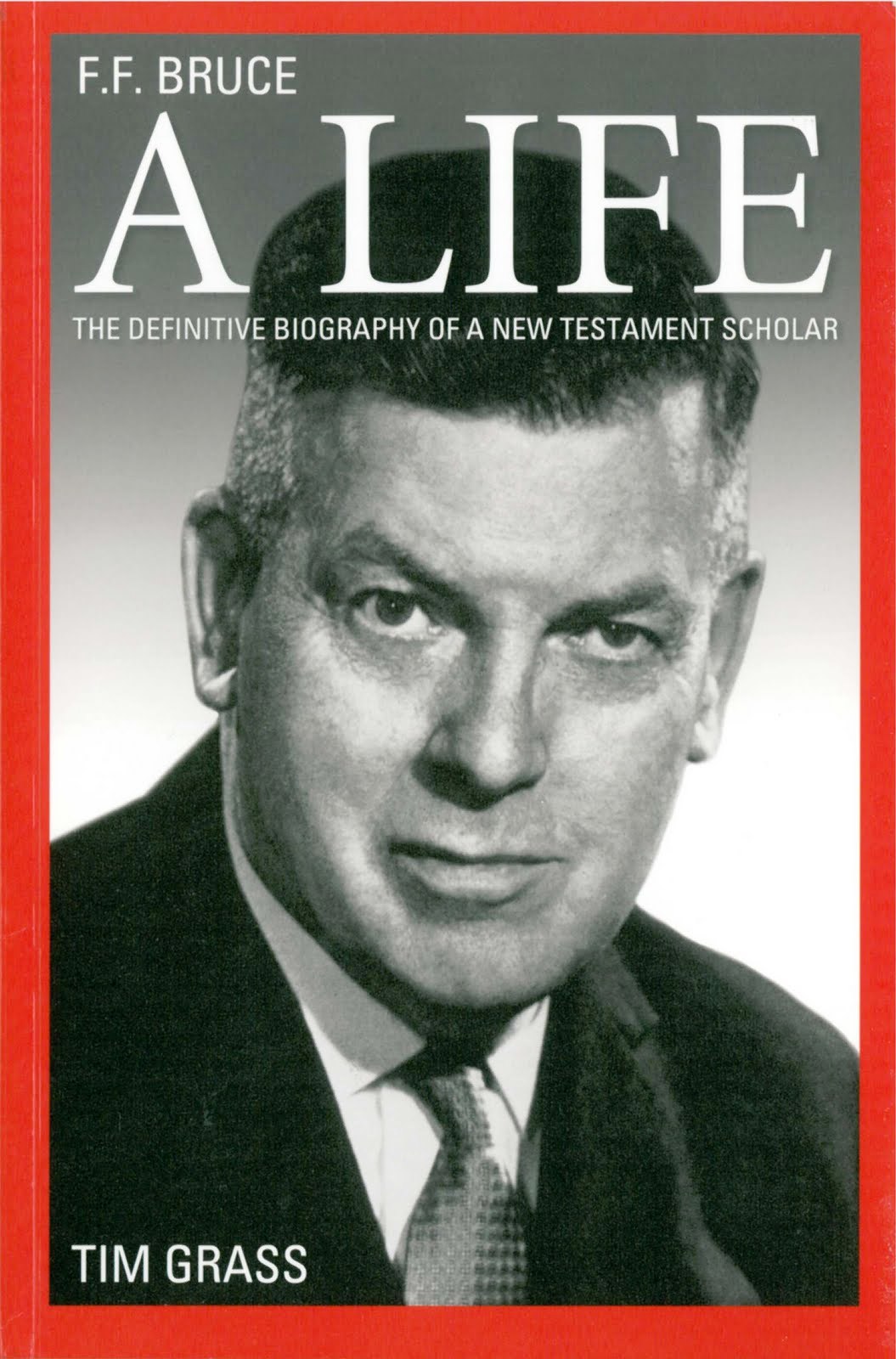 Tim Grass outlines the life of F. F. Bruce, one of the most significant Evangelical scholars of the 20th century. He does so with originality, insight and a grasp of the implications for the church today. Evangelicals have often wrestled with two problems: the relation between academic theology and church life, and the quest for recognition of their status as credible interpreters of the Bible.

Quite apart from the tribute payed by this book, Bruce’s place in evangelical scholarship from about the 1950s to the present was already assured by the long list of students whose PhD theses he supervised. While Grass offers no master list, one thinks of figures like Robert Gundry, Moisés Silva, Donald Hagner, Murray Harris, Ward Gasque, Morna Hooker, René Padilla, David Wenham, Ronald Fung, Peter O’Brien, Clark Pinnock, Seyoon Kim, and my own former teacher at Wheaton College Graduate School, J. J. Scott Jr. Grass puts the number of PhD students overseen by Bruce at Manchester at around 50, “more than any other British supervisor in the field had ever coped with” (106). Bruce’s doctoral students through the 1960s and 70s went on to furnish the backbone of dozens of New Testament departments around the world. Reading this biography aids appreciation of the presence and continuing effects of the Bruce legacy.

Perhaps the book’s major strength is the author’s resonance with Bruce’s own Brethren roots, faith, and piety. This allows him to defend Bruce against the inevitable suspicions and criticisms when a scholar attains international stature. Supporters of Bruce’s conviction that Old Princeton, B. B. Warfield, and J. I. Packer held a rationalistic view of Scripture will find support in Grass’s sympathetic presentations of Bruce’s more experiential approach (see, e.g., 94–95, 151–152, 222). Those who affirm the ordination of women will gain insight from the numerous passages where Grass notes Bruce’s unfolding convictions on this matter (see, e.g., 5, 66, 99, 126–127, 166, 191–196). Those whose approach to biblical authority can combine affirmations of infallibility with the view that Isaiah was written by two authors, that Daniel was composed in the second century BC, and that Paul was not the direct author of the Pastorals (see 148–149), will find a kindred spirit in Bruce.

Grass’s work reminds us of Bruce’s genius for biblical languages and backgrounds—he served as president both of the Society for Old Testament Study (1965) and the Society for New Testament Study (1975; see 115). A classicist by training, Bruce was also adept at Latin. By instinct and conviction he operated most of all as an historian (220–221)—in childhood, rather than playing outside, “he stayed indoors, exploring the bookshelves and, according to a sister, compiling chronologies of the kings of Judah and Israel” (13). At these and dozens of other points, Grass has recorded Bruce’s distinctives and set them within a fetching narrative framework.

The Bruce story gives occasion to ponder any number of perennial questions of evangelical identity in church, academy, and the wider world. Abiding lessons may be drawn in particular from the tensions between Bruce and pastoral leaders like D. Martin Lloyd-Jones, from the deep gratitude expressed by students and church folk for Bruce’s (and his wife Betty’s) humility and kindness, from the repeated claim by some Bruce contemporaries that he was theologically and hermeneutically unsophisticated, from Bruce’s appeal to the Holy Spirit rather than creeds or doctrines, and from Bruce’s elevation of “freedom” (or perhaps autonomy) as lodestar for the exegete (164). We are in Grass’s debt for the skill, depth, and empathy he has brought to the task of preserving and enhancing the memory of such a prolific and gracious biblical interpreter.