I never tire of teaching the Aeneid to my honors college students. I’m drawn to Virgil’s epic, not only by its poetic perfection, complex story, and timeless characters, but also by its vast historical scope. Indeed, though it was written two full generations before the New Testament, and though its pagan Roman writer was ignorant of the Old Testament, the Aeneid is undergirded by an eschatological vision almost as grand as that of the Bible.

A poet or prophet or politician who holds an eschatological vision of history believes that history isn’t random or haphazard but has a beginning, a middle, and an end. Both meaningful and meaning-giving, history moves toward its purposeful end: what Aristotle called a telos. Although one can, technically speaking, be an eschatological atheist—Marx believed that history was moving unstoppably toward a utopian state of pure communism—true eschatology requires a higher power and perspective thaht transcends the limits of earthly time and space while yet working through those limits to achieve the longed-for telos.

For the writers of Scripture, history begins with the fall of man and finds its center in the birth, death, and resurrection of Christ. But Christ will come again to usher in the telos and to reign over a new heaven and new earth. As Christians, we live between the middle and the end, between the first and second comings of the Jewish Messiah who is also the Messiah of the world.

In light of that eschatological vision, how should we then live? Trevin Wax, Bible and reference publisher for LifeWay Christian Resources and a former missionary to Romania, thinks he has an answer.

In his engaging, highly lucid new book, Eschatological Discipleship: Leading Christians to Understand their Historical and Cultural Context, Wax argues that if we’re to be full disciples of Christ, we must learn to ask one simple question: What time is it? Unless we know where we stand in terms of God’s eschatological plan for human history, we won’t be able to effectively engage the people and the culture around us. 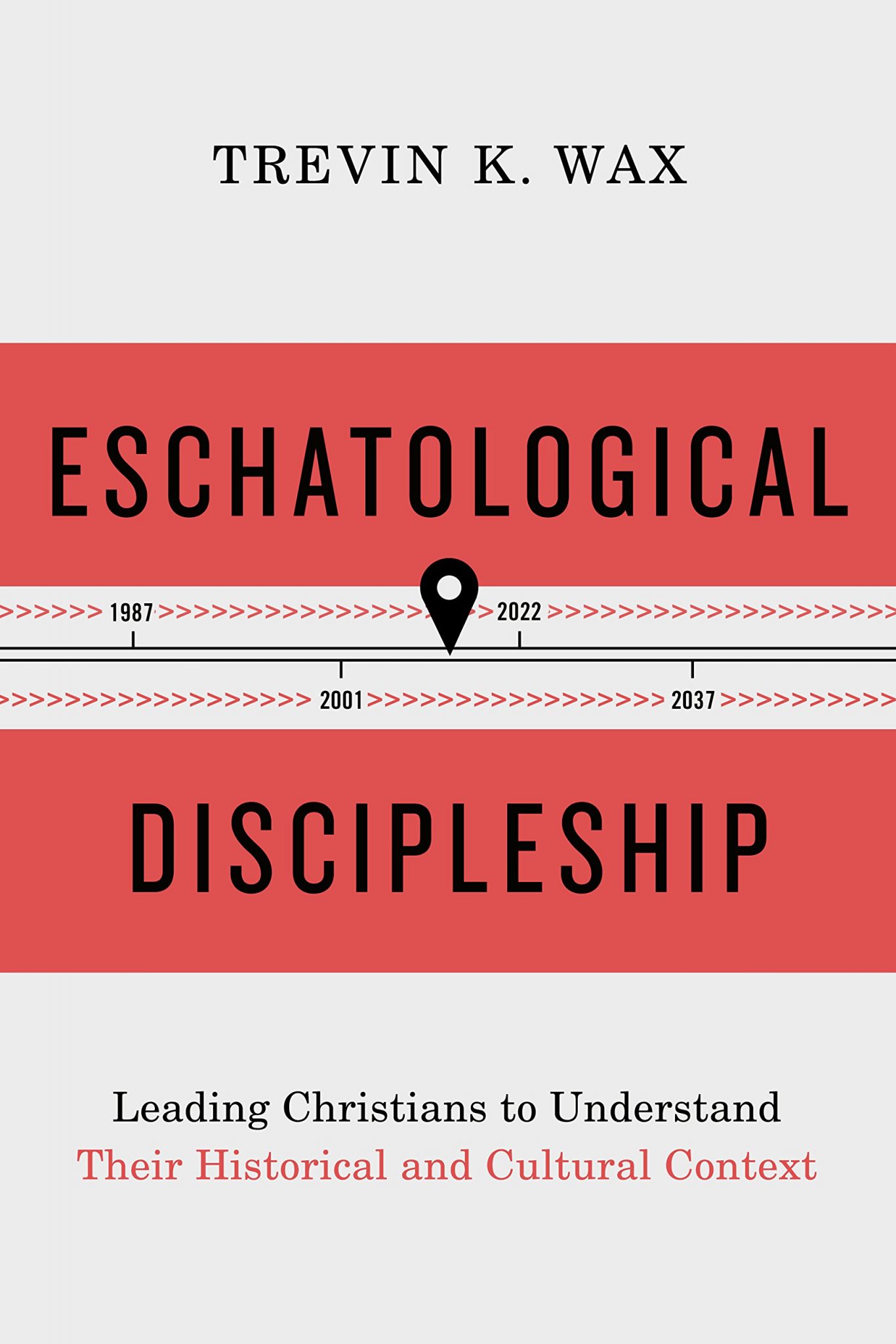 Christian eschatology forms a basic but necessary component of discipleship. The New Testament authors consistently appealed to eschatology when exhorting Christians to live according to biblical ethics. This book demonstrates the importance of the worldview question ”What time is it?” for missiology through the examination of prevailing rival eschatologies in North America today. Additionally, the book demonstrates the need for common evangelical modes of disciple-making to go beyond the adoption of personal spiritual disciplines or engagement in church-related activities to a missionary encounter and confrontation with the world.

While agreeing with apologists on the importance of knowing and critiquing the worldview of those we’re trying to reach, Wax maintains that our critiques lack an understanding of the eschatological underpinnings of modern and postmodern worldviews that have drawn people away from the gospel. He explains:

Without this eschatological dimension we are unable to comprehend fully the contextual nature of our discipleship task. If the church is a sign and an instrument of the coming kingdom of God, then we cannot see our obedience as a timeless expression of God’s will. We are, instead, witnesses to a God who has done something in history, in this space-time universe, and who is moving all of humanity and the world to the ultimate fulfillment of his purposes. Understanding the times is vital if Christians believe we are witnessing to a God who has a plan for the future. (20)

Yes, Wax writes, discipleship demands wisdom and discernment, but that wisdom must be more than book knowledge of abstract concepts and doctrines. It must be a “lived knowledge” that can flex and shift in sync with the spatial and temporal moment God has given us (37). That doesn’t mean we should accommodate ourselves to the culture—Christ calls us to be in the world but not of it (John 17:15)—but it does mean we need to speak to the moment of God’s grand narrative in which we find ourselves.

Unless we know where we stand in terms of God’s eschatological plan for human history, we won’t be able to effectively engage the people and the culture around us.

In the Gospels, Acts, and the letters of Paul, Wax argues, we’re called to be witnesses “who live with eschatological anticipation” (65). Our actions in the present are to be guided and inspired by our knowledge of the future: not only that Christ will return, but that we’re already citizens of his coming kingdom. Even now, we’re “an eschatological people under the reign of a risen Lord” (87). As such, we are, in our personal moral lives, to be driven less by a set of rules than by a sense that the day is short and judgment is coming. As Wax writes, “Because of the reality of Christ’s second coming and the consummation of the hope of the believer, ethical choices are invested with eternal significance” (85).

Wax offers many such insights into the New Testament’s call to eschatological discipleship, but the heart of his book lies in the contrast he makes between the Christian worldview and three rival worldviews that offer a different eschatology and telos: (1) Enlightenment progress, (2) the sexual revolution, and (3) consumerism.

In addition to championing reason over revelation and logical thinking over religious devotion, the Enlightenment ushered the West into a world that looks forward not to the promised New Jerusalem, but to a man-made utopia. In order to emphasize the coming light, Enlightenment eschatology demonizes the past as dark, ignorant, and backward. Rather than learn from the past, we’re to reject it and embrace the eventual decay of religious superstition. As we attempt to counter this false (if compelling) narrative, Wax cautions, Christians mustn’t romanticize the past as a golden age of Christianity. The eschatological disciple must seek instead to “overcome the Myth of Progress with the Gospel of Hope” (129).

In keeping with the progressivism of the 18th-century Enlightenment, the 20th-century sexual revolution also heralded the decay of revelation-based religion and the rise of reason-based science. However, in keeping with its 19th-century Romantic roots, the sexual revolution sought a new kind of mysticism that promised to free the disenchanted modern from the materialism and naturalism of the dour Age of Reason. Forsaking both repressive “medieval” moral codes and any form of scientism that would reduce man to a cog in the machine, the sexual revolution sought “transcendence through self-discovery and expression” (140).

Although those who ascribe to the worldview of the sexual revolution may personally gravitate toward a monogamous, heterosexual marriage, their motivation won’t be the same as those who hold to a traditional Christian worldview. For the former, marriage isn’t a divine institution that goes back to creation, but a social construct that enables sexual self-fulfillment and expression. That the (no-fault) divorce rate among believers is similar to that among non-believers testifies to the tragedy that the church has acquiesced to the sexual revolution’s redefinition of the telos of marriage.

Wax does a good job countering this redefinition, but he misses an opportunity to use a proper Christian eschatology to counter the most recent, and dangerous, development in the ongoing sexual revolution: the breakdown of any and all essential differences between the sexes. If only Wax had had the courage to argue that God made us male and female, that our bodies as well as our souls are masculine and feminine, and that even our resurrection bodies will show forth our God-given sexual differences, he could’ve gone a long way toward inoculating believers against the identity-crushing force of transgenderism.

If we as the body of Christ are to resist the idolatries of the marketplace, then we must do more than exhort people to put Christ back in Christmas.

As for the third rival worldview, consumerism, Wax effectively exposes it is as the most subtle and insidious of the three. If, for the architects of the sexual revolution, marriage is merely a vehicle for aiding our search for sexual self-fulfillment and expression, then for the high priests of consumerism, it’s nothing more than a commodity without intrinsic value. Now, it is often the case that consumerist eschatology will call us to make sacrifices to achieve our goal—but that goal, once achieved, won’t bring the kind of eternal telos promised to the believer. Unlike God’s kingdom, the hope that consumerism places in front of the consumer “continues to move forward like a carrot on a stick. As the consumer agrees to more and more discomfort in the present, the possibility of long-lasting joy shrinks” (169–70).

Worse yet for the Christian, consumerism as a worldview replaces the old sacred calendar of the church with a shopping calendar that demands an endless cycle of excessive spending. “When the purpose of life is consumption,” Wax writes with a sardonic grin, “then time is refigured to help people consume more and better” (168). If we as the body of Christ are to resist the idolatries of the marketplace, then we must do more than exhort people to put Christ back in Christmas. We must directly confront the false eschatology of consumerism that would indoctrinate us in the belief that our status as human persons rests on consumption and acquisition.

Louis Markos, professor in English and scholar in residence at Houston Baptist University, holds the Robert H. Ray Chair in Humanities. His 20 books include From Achilles to Christ, Lewis Agonistes, On the Shoulders of Hobbits, and The Myth Made Fact: Reading Greek and Roman Mythology through Christian Eyes.