Early in grad school, a professor introduced me to John J. O’Keefe and R. R. Reno’s Sanctified Vision: An Introduction to Early Christian Interpretation of the Bible, which opened my eyes to the beauty of the Christian tradition and its “theological” readings of Scripture. That book was one of Reno’s many contributions to the “theological interpretation of Scripture” (TIS) conversation among theologians and biblical scholars, which also includes the Brazos Theological Commentary on the Bible series.

In The End of Interpretation: Reclaiming the Priority of Ecclesial Exegesis, Reno reflects on decades of thought regarding TIS—with this work being at times a “substantially revised” approach compared to his previous work (xviii).

In the opening chapters, Reno—editor at First Things—asks a fundamental question: “What makes exegesis theological?” This is fundamental, after all, because one of the enduring critiques of TIS is its seemingly amorphous definition. Advocates and practitioners of TIS approach interpretation in various ways. Some take a more ontological approach, emphasizing the inspiration of Scripture and its theological authorship and subject matter; others view TIS as a way to reflect on one’s ecclesial or social location; still others employ TIS in a more devotional or contemplative mode.

Reno proposes his own definition, which in some ways lacks definition: TIS “is not . . . a method” but rather “marks a decision by today’s readers to trust in the scriptural genesis and biblical genius of the church’s traditions” (6). 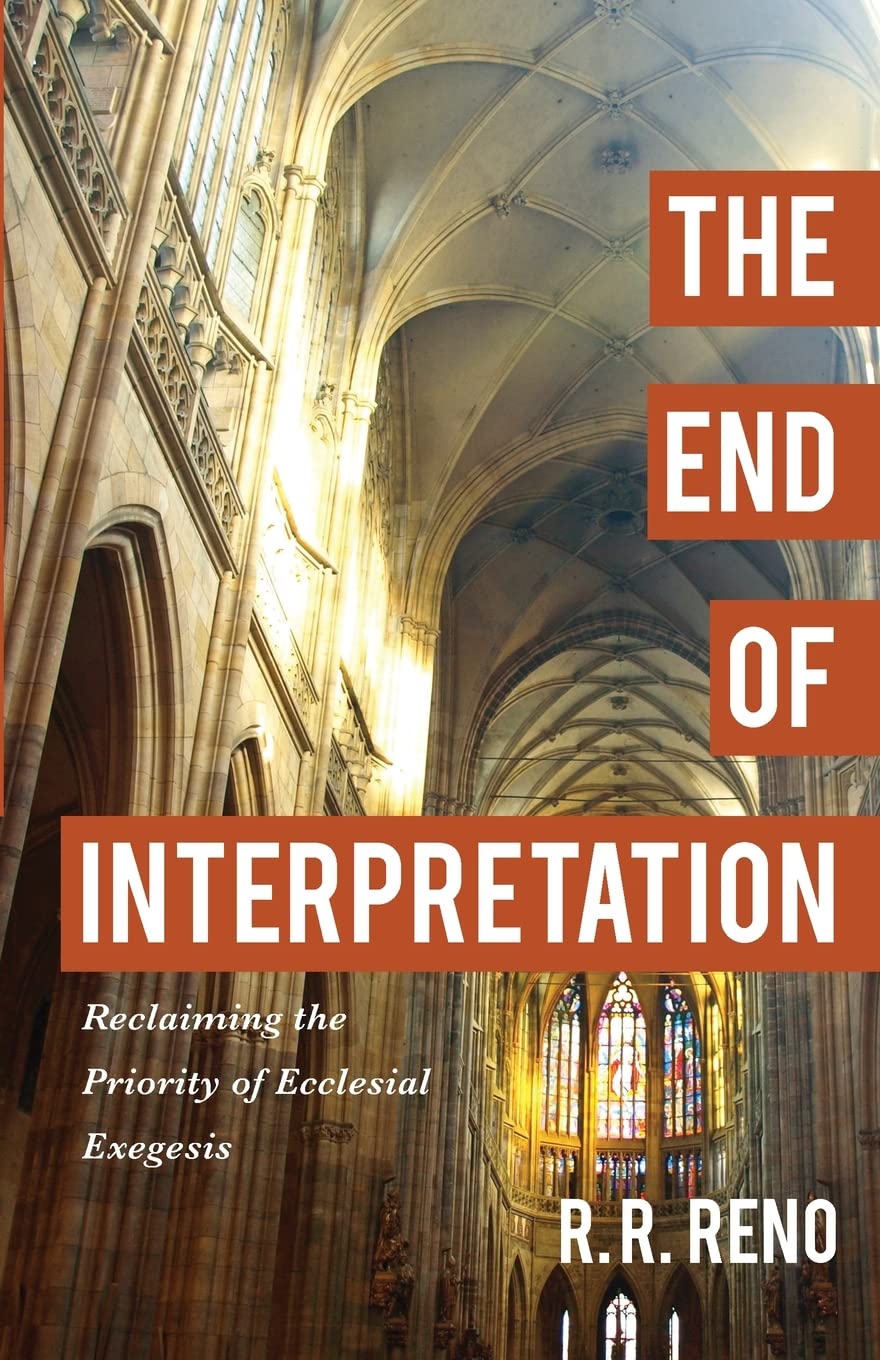 The End of Interpretation: Reclaiming the Priority of Ecclesial Exegesis

The End of Interpretation: Reclaiming the Priority of Ecclesial Exegesis

Those who wish to interpret and understand the Bible face a fundamental question: How do I interpret Scripture faithfully? Theological interpretation is an approach that has received much attention in recent years, and R. R. Reno is a leading practitioner and proponent of this approach.

In The End of Interpretation, Reno’s first full statement on the topic, he argues that Scripture is interpreted correctly only when it is read through the lens of creedal orthodoxy—that is, through the apostolic faith. The principle of accordance between doctrine and Scripture is of first importance for solid Christian interpretation.

According to Reno, if we assume that “what the Bible says accords with what the church proclaims” (7), then we can enjoy the surprising freedom of mining Scripture’s dynamic relationship with the church’s biblical, theological, and liturgical rhythms. This approach helps us avoid shortsighted, modernistic methodologies such as “historical-critical, feminist, and other approaches” (14) that obscure the faith once delivered in favor of ideological proof-texting. Since “the Bible is the Word of God and the church is the body of Christ” (35), Christians of all traditions should be able to agree that Scripture and doctrine cannot be put asunder.

Reno then takes the next few chapters to show historical examples of TIS. First, he discusses Origen’s spiritual reading, which “combined an intense focus on the details of Scripture with a stunning breadth of interpretive ambition” (51). The upshot of Reno’s engagement with Origen is to show that his reading of Scripture sought to rigorously examine Scripture at all levels—grammatical, philosophical, and so on—to demonstrate its unity. Following Origen’s default assumption that Scripture is ordered according to God’s providence, modern readers can be equipped to overcome doubts and frustrations with Scripture’s complexity and seeming disunity.

Likewise, Luther’s and the Reformation’s wrestling with Scripture’s teaching on faith and works highlighted similar concerns over what may be perceived as contradictory biblical claims. But because the reformers viewed the church’s teaching and biblical doctrine as interrelated and mutually reinforcing, their conviction that justification by faith is the teaching of Scripture gave them a theological category that could sustain the weight of the varied biblical texts and implications (88–89).

The best insights of the Christian tradition can chasten the modern biblical interpreter’s proclivity toward myopic cultural concerns.

Chapters 5 to 7 reflect Reno’s own application of TIS, respectively, to Genesis 1, Christ’s departure in John’s Gospel, and 1 Corinthians in dialogue with the poem Piers Plowman.

Regarding Genesis 1, he sets out to show that an “anti-traditional” impulse that eschews classical doctrines like creatio ex nihilo undercuts the theological claim of Scripture that God transcends creation in a strict Creator/creature divide. One example of this impulse is the school of thought that sees Israel as an ancient religion influenced by surrounding cultures that featured multileveled heavenly realms, degrees of divinity, and polytheism (91–111).

Regarding Christ’s departure in John, Reno observes that Jesus commands unity in the church around his unity with the Father. This claim is inherently doctrinal and ecclesial and thus indicates that a type of healthy catholicity or ecumenism should be pursued among Christ’s disciples today (113–30).

Finally, Piers Plowman allegorically resembles Paul’s teaching in 1 Corinthians that the world is disordered and in need of both communal harmony and a social order ruled by appropriate authority (131–52).

As is common in Reno’s work on TIS, he utilizes argumentative rigor, incisive criticisms, and compelling prose. This book reflects decades of deep reflection, most noticeable in the simple fact that Reno blends methodological critique, historical reflection, and exegetical practice with ease. The End of Interpretation is just over 160 pages and, unlike some short books, doesn’t feel rushed or trite.

As one who believes TIS has a meaningful seat at the table in scholarly and ecclesial discussion on biblical interpretation, I especially appreciate Reno’s insistence that TIS at its best isn’t a strict “method” but rather an approach or sensibility that values Scripture as God’s Word and the church as Christ’s body. The malleability of such an interpretive sensibility allows for the type of beautiful, ambitious approach required to make sense of Scripture’s rich complexity.

The malleability of such an interpretive sensibility allows for the type of beautiful, ambitious approach required to make sense of Scripture’s rich complexity.

Reno’s biting critiques of modern historical-criticism, anti-traditionalism, and especially ideological positions such as “wokeness” and feminism might feel gratuitous to some. These remarks aren’t entirely surprising, given that Reno is a Catholic who has spent much of the past decade or so running a magazine focused on political-cultural issues. A generous reading of his critiques, however, can remind us that the best insights of the Christian tradition can chasten the modern biblical interpreter’s proclivity toward myopic cultural concerns.

In one sense this book is a primer, but in another sense it assumes a level of familiarity with the broad conversation surrounding TIS, premodern exegesis, historical-critical method, and so on. As such, it’s a helpful resource for thoughtful churchmen, advanced students, and scholars interested in this conversation.