During the contentious spring of 1970, Tim Keller was an undergraduate at Bucknell University. He had recently become a Christian. Nixon had recently escalated U.S. involvement in the war in Vietnam. When students at Bucknell gathered on the quad for several days of protest and discussion, Keller and a small band of fellow believers joined them. They sat near the edge of the crowd, in-but-not-of these demonstrations, holding up their invitation to a different but entirely relevant conversation. Their sign read, “The resurrection of Jesus is intellectually credible and existentially satisfying.”

Keller tells this story in his latest book, Hope in Times of Fear: The Resurrection and the True Meaning of Easter, a book clearly situated in another disruptive year marked by similar anxiety and polarizing anger. Writing 50 years later, Keller still holds up that same sign. And, from my vantage point, it seems like a good summary of his public ministry in the meantime. Christianity answers the questions of the mind and the longings of the heart. Jesus is the one you’ve been looking for. 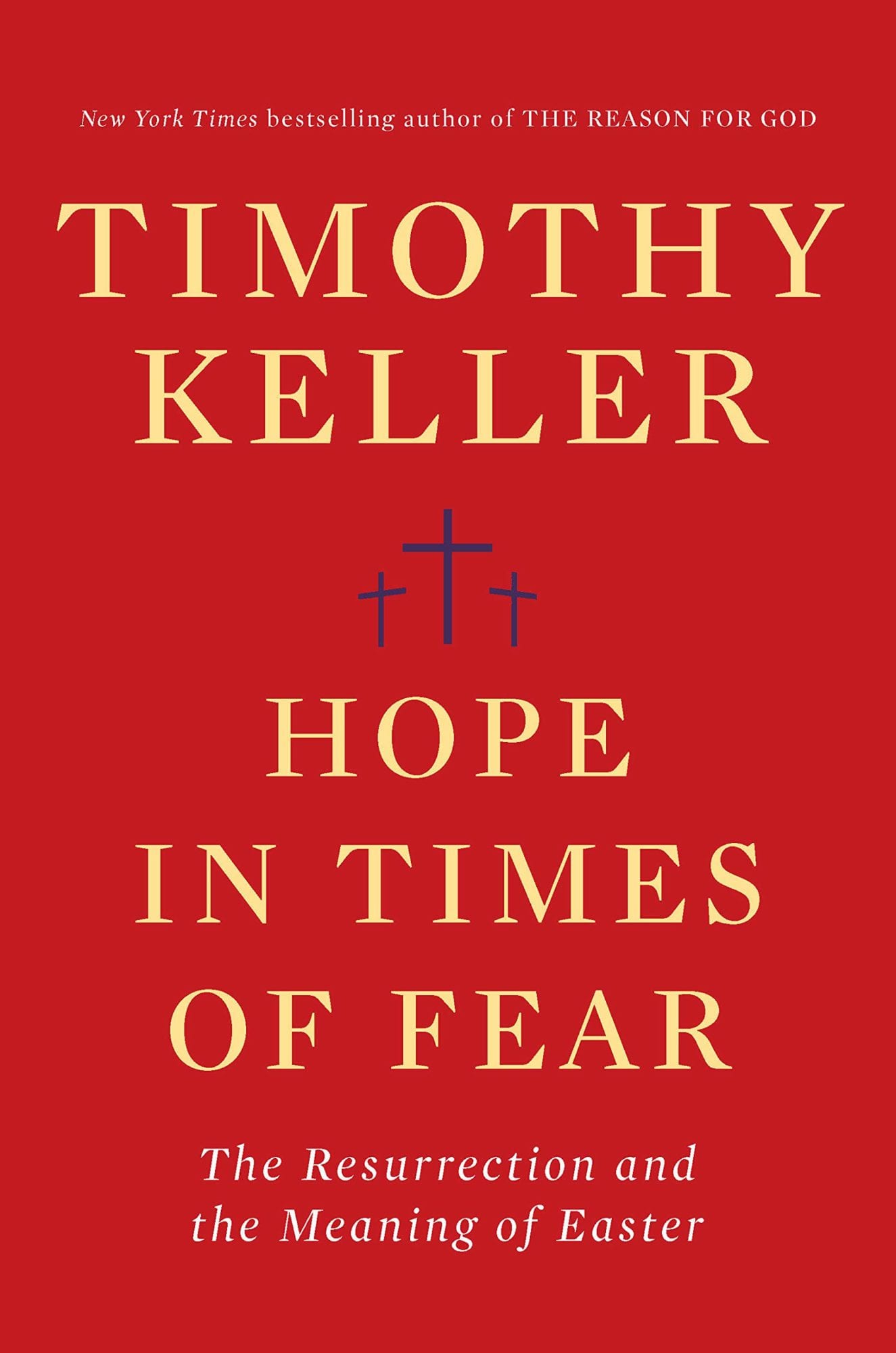 Hope in Times of Fear: The Resurrection and the Meaning of Easter

Hope in Times of Fear: The Resurrection and the Meaning of Easter

Penguin Random House. 272 pp.
Hope in Times of Fear is a book that unlocks the meaning of Jesus’s resurrection for readers. Easter is considered the most solemn and important holiday for Christians. It is a time of spiritual rebirth and a time of celebrating the physical rebirth of Jesus after three days in the tomb.For his devoted followers, nothing could prepare them for the moment they met the resurrected Jesus. Each failed to recognize him. All of them physically saw him and yet did not spiritually truly see him. It was only when Jesus reached out and invited them to see who he truly was that their eyes were open. Here the central message of the Christian faith is revealed in a way only Timothy Keller could do it–filled with unshakable belief, piercing insight, and a profound new way to look at a story you think you know. After reading this book, the true meaning of Easter will no longer be unseen.
Penguin Random House. 272 pp.

In some ways, though this latest book speaks into the disorientation of 2020, what Keller has to say will be wonderfully familiar to those of us who’ve been reading his books for the last decade or more. And yet this book is clearly unique, and badly needed, for at least three reasons.

Christianity answers the questions of the mind and the longings of the heart. Jesus is the one you’ve been looking for.

First, I don’t know of another Keller book so thoroughly saturated with the Bible. Of course his other books are full of and faithful to Scripture. And in this book there are still many helpful references to authors like Lewis, Volf, Wright, Bellah, Taylor, and others. But the driving argument of Hope in Times of Fear moves from one exposition to another.

Though the flow is systematic, not canonical, the early chapters of the book read like a biblical theology of redemptive reversals. Keller shows how consistently God confounds the wisdom of the wise, bringing strength out of weakness, joy out of sorrow, and ultimately life out of death. This pattern—what he calls the Great Reversal—is a thread you can find all over the Bible and pull all the way to the death and resurrection of Jesus.

Second, though this book draws from the insights Keller has offered over the years, it leverages them to make one central point: everything depends on the resurrection of Jesus. This is the master key that opens all the locks. Or to put the point in the Bible’s chosen metaphor, this is the cornerstone on which everything rests and holds together.

After a helpful first chapter on the historical evidence for the resurrection, Keller spends most of the book pressing the reality of the resurrection into the details of everyday life: “It is one thing to know about the resurrection, [but] it is another thing, Paul says, ‘to know the power of his resurrection’ (Philippians 3:10), to know it personally and experientially” (xxi).

Keller doesn’t want to simply tell us that Jesus is alive. He wants to show us what a difference it makes for what we’re facing. To get us there, he moves quickly and touches a stunning range of themes, from idolatry to justice, from sexual ethics to self-forgetfulness, from spiritual experience to resilient identity to the formative power of Christian suffering.

It’s as if Keller uses this book to put the test of 1 Corinthians 15 to the core insights he’s spent the last decade recommending to us.

“If Christ is not raised”. . . he’s a counterfeit god too. You’re still in your sin, not secure in the prodigal grace of a loving Father. There’s no hope for justice and your work may as well be pointless because we’re all heading for oblivion anyway. If Christ is not raised, Christianity is not intellectually credible or existentially satisfying.

“But in fact Christ has been raised from the dead.” And on page after page Keller shows how this living, breathing, enfleshed, and historical reality holds everything together.

Finally, this book is a testament to how Christ is holding Keller together. The year 2020 was even more turbulent for him than for most of us. In early summer, at the age of 69, he was diagnosed with pancreatic cancer. He wrote the book under chemotherapy with this deadly disease as a daily companion.

He wrote the book under chemotherapy with this deadly disease as a daily companion.

Besides brief mentions in the preface and the acknowledgements, Keller doesn’t make much of what he was facing in the main argument of the book. His focus is relentlessly on Jesus. But, still, he admits that “writing in such dark times helped me see in the resurrection new depths of comfort and power” (217). I expect that the vividness and power of the book flow directly from this new, hard-won knowledge of what he’s known for so long.

I first heard of Tim Keller as a college student when I attended an academic conference on the legacy of Jonathan Edwards. Keller was invited to speak on Edwards as a preacher. That was a long time ago. But what I remember was his focus on Edwards’s appeal to the spiritual sense of the heart—what Edwards talked about as the difference between knowing honey is sweet because someone describes it to you, and knowing honey is sweet because you’ve put some in your mouth. As Keller described it, Edwards preached not to give new information, but to make information new. He wanted people to experience the truth of the truth they affirmed, to deeply know what they had known.

I couldn’t help thinking back on that image from Edwards as I read this book. I interpreted Keller’s intellectual arguments through the filter of his existential situation. Here is a brother facing our great enemy, the last enemy to be destroyed. He faces this enemy armed with insight from the Bible that he’s spent decades harvesting and serving to others. It’s only natural to wonder, in this moment of truth, is he still existentially satisfied? Does the honey taste sweet? This book is Keller’s resounding answer to that question: Yes, sweeter than ever. The cornerstone holds even now. Especially now.

And that makes Hope in Times of Fear a precious gift, yet another Great Reversal, through which God brings from deep suffering the life-giving hope we so desperately need, now and always.

Matt McCullough (PhD, Vanderbilt University) is pastor of Edgefield Church in Nashville, Tennessee, and the author of Remember Death: The Surprising Path to Living Hope (Crossway, 2018) and The Cross of War: Christian Nationalism and U.S. Expansion in the Spanish-American War.