John Perkins’s brother might’ve lived if the nearest hospital hadn’t been 90 miles away.

In 1946, Clyde was a veteran soldier of World War II, where he had earned a Purple Heart after being injured several times. But it wasn’t the bullet of a foreign soldier’s gun that killed him; it was two bullets in the stomach from a deputy sheriff in Mississippi. After a verbal reprimand for being part of a loud group, the sheriff, a white man, struck Clyde, a black man, with his nightstick. When he reared back to do it again, Clyde made the fatal mistake of grabbing the stick in self-defense. That’s when the officer whipped out his gun and pulled the trigger. By the time they made it to the hospital in Jackson, there was little they could do for Clyde Perkins. He died later that night with his little brother, John, in the next room.

Today John Perkins is 86. Far from letting his brother’s murder embitter him toward white people, he has become known as a tireless fighter for racial harmony. His is an unlikely story of perseverance and triumph. Even though Perkins dropped out of school after third grade, he now holds 12 honorary doctorates, has authored or contributed to countless books, and is an internationally known preacher and leader. His latest book, Dream With Me: Race, Love and the Struggle We Must Win, invites us to take a seat at the feet of a veteran activist and listen to his hard-won wisdom.

Love Is the Final Fight

Although he’s known for his efforts at justice, this book is different. Rather than focusing on social ills and the Christian response, Dream With Me distills Perkins’s entire philosophy down to one word: love. “As I look back over my personal journey—the highs, the lows, and everything in between—it’s all about love,” Perkins writes. “Love is the first, middle, and final fight.” He then invites the reader to dream with him about what a world full of justice and wrapped in love looks like. 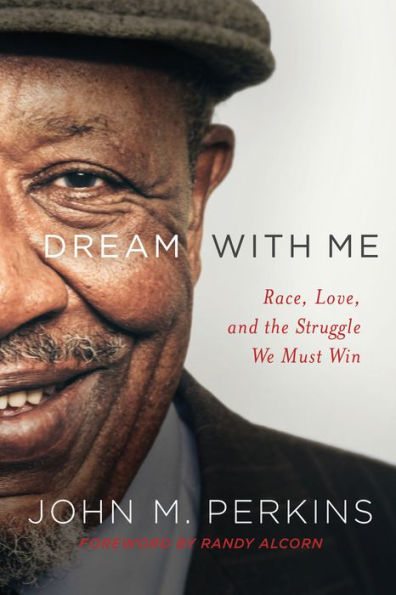 Dream With Me: Race, Love and the Struggle We Must Win

Dream With Me: Race, Love and the Struggle We Must Win

Each of the 14 chapters of Perkins’s book reflects on a different theme from his life or ministry. He ranges from topics for which he is well-known, like the “Three Rs” of Christian community development (reconciliation, relocation, and redistribution), to more introspective ones like the unexpected death of his oldest son, Spencer. Throughout the work, Perkins navigates the tension between telling the truth about the past and acknowledging the progress that decades of struggle have achieved.

Pivotal in Perkins’s life was his experience in a jail in Brandon, Mississippi, in 1970. Not only were Perkins and others illegally detained, but white police officers beat them in between chugs of moonshine whiskey. The emotional reflex in this situation is rage. But Perkins found the strength to love through his faith in Jesus Christ. “While I lay on the floor of the Simpson County Jail in Brandon,” he recounts, “I made the decision to preach a gospel stronger than my racial identity and bigger than the segregation around me.”

He turned a racist attack into motivation for reconciliation.

One of the most startling and vulnerable chapters in the book focuses on Perkins’s regret that he didn’t do more to serve poor whites: “There’s one thing I know I would change if I had the chance to do it all over again: I would do more to help poor whites.” In another staggering demonstration of love, Perkins wishes he’d been more attentive to the demographic that often felt most threatened by African Americans.

Competing for jobs and status, many impoverished white people saw race as their only advantage over black people. But Perkins recognizes that this group of people could expect little attention from wealthier whites, nor could they hope to gain much benefit from the civil rights movement that helped change the status quo for black people. Caught between wealth and race, Perkins muses, poor whites have been overlooked in justice movements.

Although justice and love are inseparably intertwined, Perkins is at his best when he explores how justice affects the way Christians live out their faith. He explains, “Justice is an economic and stewardship issue. . . .The way we utilize the resources we’ve been given determines whether we are being just.” This definition leads Perkins to a more activist expression of faith. He’s not against churches organizing to march and protest. He posits that white evangelicalism has attended to matters of personal salvation and holiness, but the black church has emphasized themes of liberation both in spiritual and temporal terms. For him, a faith that doesn’t lead to public justice is a faith that must be re-examined.

Perkins discusses the responsibilities of both black people and white people in the area of racial reconciliation. “In America, it’s pretty safe to say that blacks and whites and other ethnic groups represented have all sinned against one another. So all parties need to repent, and all parties need to forgive.” This broad application of love could be misinterpreted by undiscerning readers. Some readers might take him to mean that minorities are just as culpable for racial injustice as people in the majority are. But that’s not his point.

In Dream With Me, Perkins exhorts both whites and blacks to change in their own ways to bring about racial reconciliation. He wants white people to stop oppressing black people through hate and ignorance. He also advises that black people need to forgive white people and build families, education, and economic status. I fear, though, that some may construe Perkins to mean that black people are always to blame for their own poverty or social dislocation. Perkins’s own life, however, testifies to vigorous efforts to disciple individuals in personal morality, even as he objects to unjust systems that limit options for human flourishing.

Veteran pastors, activists, and justice-oriented types seem to end up in the same place toward the end of their ministries. Age and experience teach them that what seemed like a big deal in one season of life, turns out not to be all that important. The big things get bigger and less numerous. They come to see that only a few aspects of the human condition are worthy of a lifelong struggle. This pattern holds true for John Perkins.

Ultimately, Dream With Me is a book about unity bonded by love. He says we must “view ourselves as one race, one human race” and that when we do, “We can start believe that as members of the family of God, reconciled to him through the blood of Jesus Christ, we are actually brothers and sisters.”

Perkins seems unperturbed by so much of what divides younger Christians. He’s found an expansive way to demonstrate a love that has room for all kinds of people. He’s pro-life but doesn’t get hung up on political policy. He holds to traditional views of marriage and sexuality, but he has found glad company with those who live differently. He has endured more racism than most people alive, yet calls white evangelicals some of his most stalwart friends.

What Perkins emphasizes and what he leaves on the periphery may confuse those who haven’t seen as many sunrises as he has. But there’s a lesson for all Christians in Perkins’s life and thought: “Above all, keep loving one another earnestly, since love covers a multitude of sins” (1 Pet. 4:8). The pursuit of that dream honors not only Perkins, but the God who saved him.

Editors’ note: Racial unity is a gospel issue and all the more urgent 50 years after Martin Luther King Jr.’s death. Join the Ethics & Religious Liberty Commission and The Gospel Coalition at a special event, “MLK50: Gospel Reflections from the Mountaintop,” taking place April 4, 2018, in Memphis, Tennessee.

The 50th anniversary of King’s tragic death marks an opportunity for Christians to reflect on the state of racial unity in the church and the culture. It creates the occasion to reflect on where Christians have been and look ahead to where we must go as we pursue justice in the midst of tremendous tension.

Jemar Tisby (BA, Notre Dame; MDiv, Reformed Theological Seminary) is the president of The Witness: A Black Christian Collective. He also co-hosts the podcast, Pass the Mic. He is currently a PhD student in history at the University of Mississippi. You can follow him on Twitter.