In Damned Nation: Hell in America from the Revolution to Reconstruction, Kathryn Gin Lum argues the doctrine of hell made Christianity a useful but dangerous religion in 19th-century America. Lum, assistant professor in the religious studies department at Stanford University, counters the prevailing academic thesis that as cultures modernize they come to view hell as an obsolete relic.

Lum’s desire isn’t to defend the doctrine, but to convince readers we can’t comprehend America without understanding orthodox teaching on hell.

It serves Christians well to think critically about history, and Lum is as a reliable guide, exploring the writings of early Americans who thought deeply about hell. She gives us no reason to think she’s a Christian, but she’s curious, and her impetus for the research may be the question, “Why do so many Americans in the 21st century still believe in a holy God who eternally punishes unrepentant sinners?”

What has made the doctrine of hell useful historically? Lum gives three answers. Believers in hell (1) promoted virtue, (2) organized political action, and (3) comforted the oppressed (232).

The United States began with a robust commitment to personal virtue and evangelism. Americans connected the two. Our forefathers, Lum insists, promoted piety by preaching the necessity of faith in a holy God who demanded obedience and punished disobedience. Though this desire for virtue was widely shared, hell had staunch opponents. Universalists, for example, rejected the idea (136). Mormons softened the doctrine’s hard edges by teaching degrees of hell (145). Liberals like Horace Bushnell and Catharine Beecher reinterpreted hell (155). But for Lum these exceptions simply prove the rule: true virtue required faith in hell.

Hell and the Civil War

The most interesting part of Damned Nation is Lum’s argument that belief in hell fueled the Civil War. She sees it in the motives of slaveholders who preached the doctrine of hell to simultaneously control and convert slaves: “Social control and evangelization were inseparable in the minds of Christian slaveowners” (174). In other words, countless southern slaveholders saw the institution of slavery as a divine appointment for the salvation of African-Americans. Thus, they used hell to justify their cruelty. 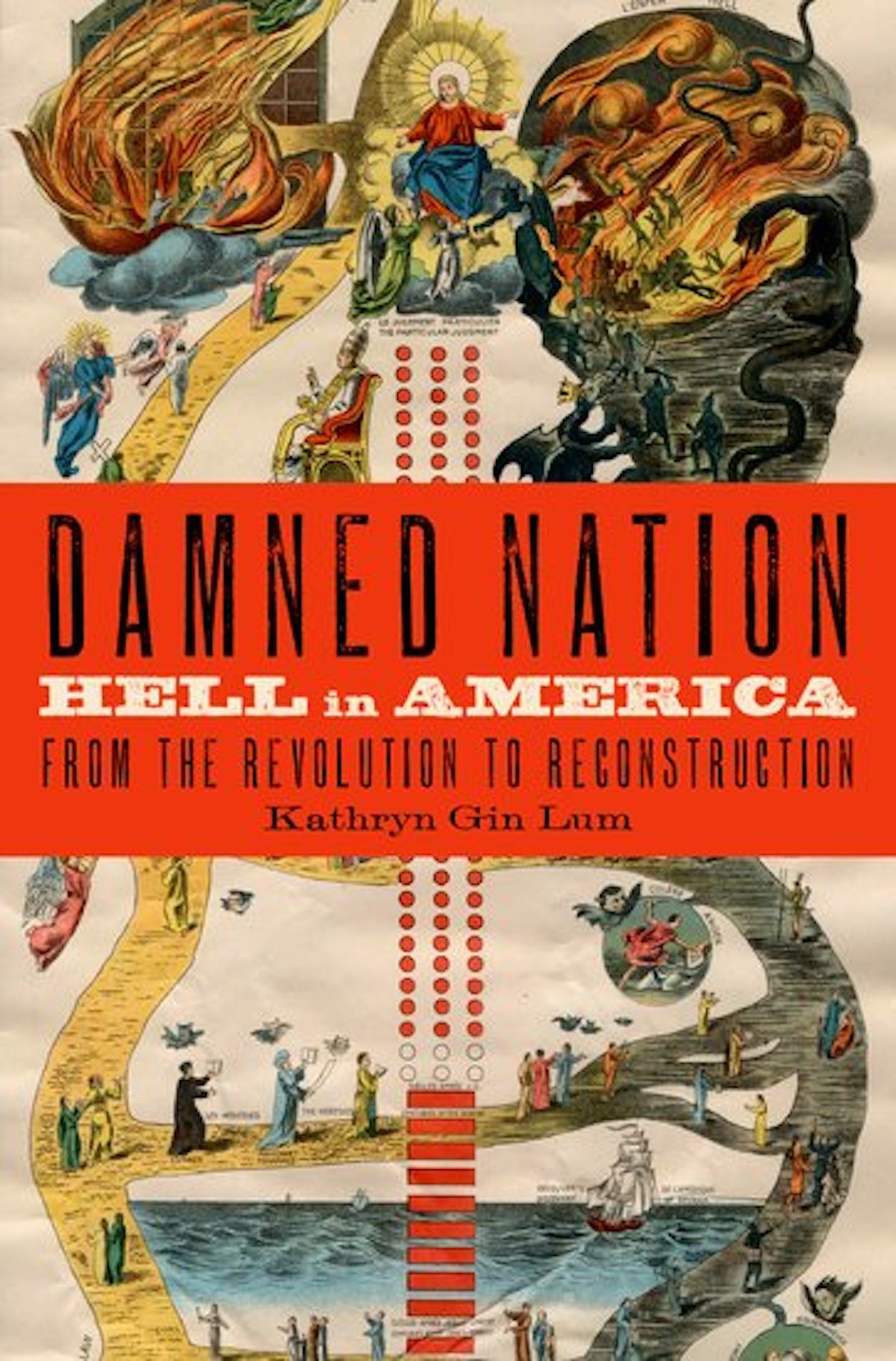 Damned Nation: Hell in America from the Revolution to Reconstruction

Damned Nation: Hell in America from the Revolution to Reconstruction

Ironically, many northern abolitionists who rejected the doctrine of hell faithfully preached it anyway. Hell was a useful tool in their hands. They said hell is what their southern enemies deserved, and their anti-slavery, pro-hell sermons rallied countless Americans to the abolitionist cause. “Even for those abolitionists who rejected belief in personal damnation,” writes Lum, “[hell’s] usefulness as a concept with which to condemn the nation made it a powerful rhetorical weapon in the fight against slavery” (200).

When the North and South went to war over slavery, then, they shared one thing in common: belief in hell. Each region picked up arms with the Lord on their side, convinced their enemies had abandoned the God of the Bible and deserved the hell of the Bible.

Then something happened: bodies started to pile up and popular attitude toward hell shifted. Chaplains still sat at the bedside of bloody soldiers preaching the gospel of repentance and faith but, Lum maintains, the path to hell narrowed while the road to heaven widened. Her argument goes like this: Thousands of soldiers faithfully died for their country. Their friends and family had a hard time believing God would actually damn so many to hell for their lukewarm (or absent) response to the gospel of Jesus. Therefore, Lum suggests:

By the end of the war, the sheer scale of death accelerated the trend toward assuming heaven for loved ones and muted the rhetoric of fire and brimstone in the mainstream evangelical denominations. (202)

Heaven became a place for the “good,” rather than for the repentant. Even the hymnody of this generation seems to largely ignore the justice of God. The lyrics, Lum points out, “by and large emphasized the promise of heaven” (211). And by the time of Reconstruction, Americans had changed how they spoke of hell:

Evangelists did not jettison hell but suggested that it was a threat only to those who were clearly outside the pale: Darwinists, infidels, and theological liberals who rejected a literal reading of the Bible. (225)

Though Damned Nation is an academic book, thoughtful Christians who read it will walk away with several important and practical observations. Here are just a few:

(1) The doctrine of hell is not a laughing matter.

Too many preachers make light of hell in their sermons. They do this with crude statements (“turn or burn”) or more often by simply neglecting to say what should be obvious: eternal punishment is a sobering reality to be handled with sensitivity and care. Lum unearthed a fascinating response to missionary preaching from an 18th-century American Indian. He couldn’t reconcile God’s goodness with the fact that, if what the missionaries preached was true, his ancestors died without hope. How could God, he asked, “Damn them eternally, without ever opening to them the door of salvation” (128)? Such questions haven’t gone away, and Christians eager to contend for the faith need an appropriate response.

(2) Many evangelicals today are troubled by hell.

Just about all of us have been to a funeral where someone who gave no evidence of genuine saving faith in this life was all but canonized as a saint by the preacher. It’s as if we’ve cut Matthew 7:21–23 out of our Bibles. Though Jesus said it isn’t enough to simply call him “Lord,” 21st-century believers find it hard to not tell a grieving family their loved one is in heaven. How did we get here? Why are we so troubled by hell? Though there are philosophical reasons (postmodernity) and theological reasons (higher criticism), there are historical reasons, too, and Lum offers a compelling explanation.

(3) Belief in hell may not be on the decline.

Lum cites a 2008 Pew Forum study which reported that 59 percent of Americans believe in hell—a number she argues is probably a low estimate (235). As I read through Damned Nation, I wondered if Lum herself was surprised by hell’s staying power. Either way, she’s part of a new wave of secular historians taking issue with the argument that belief in hell is incompatible with an “enlightened” and modern culture. The doctrine of hell has stood the test of time.

(4) Hell is a doctrine that comforts the oppressed.

Sadly, Lum gives little attention to one of her own explanations for the persistence of faith in hell—it’s ability to comfort the oppressed. For all of the thorny problems that come up whenever it’s considered, there remains the possibility that people believe in hell because it’s a legitimate answer to evil. A place of eternal torment in the next world addresses the wickedness in this one. Lum ends her work with the reminder that by the time of the Reconstruction the doctrine of hell had been softened by many, and this is true. But for numerous others it remained and remains the promise that a holy God will not let wickedness go unpunished. She cites the esteemed African-American bishop Henry McNeal Turner, who was acutely aware of hell’s comforting power: “The brutal treatment of helpless women which I have witnessed . . . is enough to move heaven to tears and raise a loud acclaim in hell over the conquest of wrong” (236).

(5) Belief in hell persists because hell is real.

There is one place a secular historian like Lum simply cannot go. She cannot argue that belief in hell persisted through the Enlightenment and Romanticism, through the Civil War and the social gospel, and still today because the teaching is, in fact, true. Christians live with the confidence that when Scripture speaks, God speaks. And the God of the Bible doesn’t merely describe himself as good, but as just. On the cross he punished the sin of all who would repent and believe in Christ; in hell he will punish the sin of everyone else. In other words, God addresses evil head-on. He defines evil as rebellion against him—high treason. And such treason deserves the punishment of a just God. As Mr. Beaver told young Lucy in The Lion, the Witch, and the Wardrobe, “‘Course he isn’t safe. But he’s good. He’s the King, I tell you.”