Do you know what’s incredibly challenging? Trying to write anything that resembles a balanced review of Crash the Chatterbox: Hearing God’s Voice Above All Others, the latest book by Steven Furtick, pastor of Elevation Church in Charlotte. How do I write a review that isn’t kinder than the book warrants, but also can’t be easily brushed off by the author’s fan base with a “haters gonna hate”?

Which, I suppose, is part of the problem. We approach books with our opinions of the author in place, and tend to look to confirm our biases. We read through those filters, an appropriate observation considering the central purpose of Crash the Chatterbox—to help readers hear God’s voice above all the competing negative voices around and, most of all, inside of us.

First, let’s talk about the good of this book. Furtick builds his argument, or rather his counterargument to the lies we believe, around four “confessions”:

“These are truths about God and truths about you that come straight from God’s Word,” Furtick writes. “So by filling our spiritual ears with these four declarations of truth, we receive and respond to what God says about who he is and who we are in him” (Kindle location 371).

Taken on their own, these confessions (or, more accurately, declarations) are actually pretty helpful. What matters isn’t what I, or others, think about me but what God says about me. What God says he will do and what God has already done is more than enough to overcome my fears. What God says I can do—or, more correctly, what he’s empowered me to do through the Holy Spirit—is more important than what others think I can do. 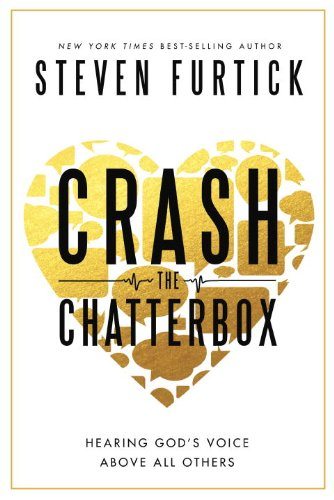 Crash the Chatterbox: Hearing God's Voice Above All Others

Crash the Chatterbox: Hearing God's Voice Above All Others

But the devil, as they say, is in the details. And the details, I’m afraid, spoil Crash the Chatterbox. I’ll limit myself to four significant errors I see in this book.

1. Its false premise. Crash the Chatterbox is built on a shaky foundation, namely the claim that of the allegedly 80,000 thoughts we have each day, roughly 80 percent are negative.

We can all agree, I think, about a kind of negativity that’s detrimental to our health and well-being. But Crash the Chatterbox lacks a nuanced view of negative thoughts—that while some are destructive, others are actually good for us. “Don’t put salt in your eye,” “Don’t walk in front of a bus,” and “Unless you repent, you will all likewise perish” (Luke 13:3) are negative thoughts, after all, but they’re also good for us. Putting salt in your eye is a bad idea. Getting hit by a bus can kill you. And hell is unspeakably horrific.

2. Its defensive posture. Furtick is no stranger to criticism. It’s only natural, then, that his book would have an element of defensiveness, even as he tells us we need not fear such things.

Furtick emphasizes his personal call from God, “whispered” directly to him, that together he and God are going to take Charlotte for God’s glory (Kindle location 195). He boasts of “more than one hundred teenagers [making] public declarations of faith in Christ” at a teenager’s funeral where he preached (Kindle location 1350) and of how, after giving a moving eulogy for his father, who died of ALS, $61,000 was pledged in his honor (Kindle location 2730). It’s as though he’s preemptively saying to his critics, “God called me to do this; you can’t argue with these results.”

Moreover, while I certainly don’t want to ignore the schemes of the Devil, we should recognize that not every negative situation or accusation arises from demonic machinations. We shouldn’t assume that inner conflict is often “a confirmation of your calling [because] the enemy only fights those who pose a threat” (Kindle location 2818), or that if you “haven’t had a head-on collision with the Devil lately, it may be because you’re running in the same direction” (Kindle location 2820). The truth is more complex.

There are times when we are opposed by the Devil, certainly. And there are times when we’re opposing the plans of God, to be sure. But there are also times when God himself opposes our plans—not because they’re rooted in power or pride but because our good desires aren’t best. Paul experienced this in his ministry when God prevented him from traveling to Bythnia, directing him instead to Macedonia (Acts 16:6–15). He wanted to proclaim the gospel in the one place—a good desire, one hard to imagine God opposing—but instead was called to another.

3. Its ambiguous approach to “hearing” God’s voice. Furtick’s approach to hearing from God is confusing. Affirming that God’s “voice rises from the pages of his Word, which is the exact expression of his will” (Kindle location 189), he also describes God as “always speaking . . . [to] everyone. . . . But we hear so little of what he says because our consciousness of his voice is obscured by our mental static” (Kindle location 268). Furtick tells us we need to train our minds to hear “God’s whispers” (Kindle location 1809).

4. Its hopeless help. Ultimately, this book is largely confused about the gospel and grace. Even as Furtick acknowledges that “we understand that God has come near to us in the person of Jesus and that what Christ did on the cross completely satisfied God’s wrath against sin” (Kindle location 1260), he rarely if ever connects his encouragement to this truth. Instead, we get this advice: “The gospel says that those who do not forget the past are condemned to repeat it” (Kindle location 2485).

At times Furtick’s advice more closely resembles that of Oprah than of a Christ-exalting, gospel-proclaiming preacher. His message seems to be less about what Jesus has done for you and is doing in you, and more about what you are doing to unlock, release, and call down God’s blessing and realize your life potential. “It comes down to how many times you pound the ground,” he says (Kindle location 3330).

Crash the Chatterbox is right in that changing our outlook begins with our identity in Christ. Unfortunately Furtick’s teaching distracts from gleaning much that’s truly life-changing. And what few good nuggets of truth you’ll find in its pages are better said elsewhere by more faithful teachers. Perhaps start with Who Am I? by Jerry Bridges or Gospel Deeps by Jared Wilson.

Aaron Armstrong is the brand manager of The Gospel Project, author of several books including Epic: The Story that Changed the World, and screenwriter of the award-winning documentary Luther: The Life and Legacy of the German Reformer. You can follow him on Twitter.