How do you respond to being attacked by the soon-to-be president?

Russell Moore was famously on the receiving end of a belligerent Trump tweet in 2016, when the GOP candidate labeled him a “nasty guy with no heart!” Trump was hardly alone in his anger, and the critics piled on.

I was most familiar with Moore through his Adopted for Life (2009) and felt a kinship with him as a fellow adoptive dad. In the years since, I’ve wondered how Moore endured a public drubbing and the ongoing institutional fallout from segments in the Southern Baptist Convention.

In The Courage to Stand: Facing Your Fear Without Losing Your Soul, we have something of an answer. Moore—president of the Ethics and Religious Liberty Commission of the Southern Baptist Convention and TGC Council member—writes of his experience with fear, from “nearly paralyzing depression” as a teenager (3) to the scorched-earth political arena in which he has been a prominent voice.

While this isn’t a book about politics, and Moore doesn’t explicitly address his experience as an evangelical voice during the 2016 presidential election, many readers will see it as the obvious backdrop. In some ways, the book seems to be working out what Moore invariably had to wrestle with, privately and publicly.

Moore explores crisis and fear, and the courage they can produce. The book is built around the biblical story of Elijah; Moore shows him to be “a man with a nature like ours” (James 5:17) whose life is best understood not by his prophetic strength on Mount Carmel, but by his whimpering retreat to the seclusion of the wilderness.

The result is an engaging and gospel-rich book that will help Christians navigating personal crises, pastors who feel rejected and alone, and those worried about what looms just over the horizon. 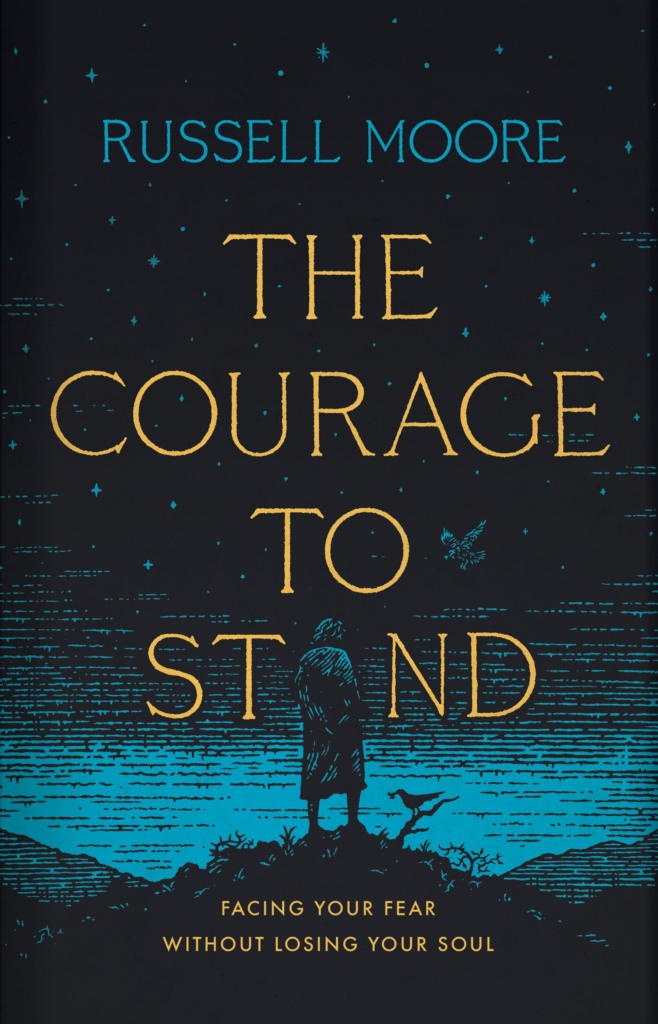 The Courage to Stand: Facing Your Fear without Losing Your Soul

The Courage to Stand: Facing Your Fear without Losing Your Soul

The crisis we face is not a crisis of clarity but a crisis of courage. Our problem is not so much a lack of knowledge as a lack of nerve. And yet, Jesus told us that we are to stand with courage. That doesn’t mean that we will be fearless, but that we will know how to face our fear and keep walking toward the voice that calls us homeward. Gospel courage is nothing like the bravado of this anxious age. The call to courage is terrifying because the call to courage is a call to be crucified.

In The Courage to Stand, bestselling and award-winning author Russell Moore calls readers to a Christ-empowered courage by pointing the way to real freedom from fear—the way of the cross. That way means integrity through brokenness, community through loneliness, power through weakness, and a future through irrelevance.

We live in a culture increasingly shaped by fear, not just in our individual experiences but in society at large. Much of our public discourse has come to resemble the wasteland of a battlefield. Lines are drawn, trenches are dug, and even civilians are conscripted and pulled into service.

The surest way to come under personal assault is to speak with conviction on virtually any subject of consequence. We’ve all witnessed the wrath of the online mob, obliterating one public figure after another. Fear creeps in, and we start to believe it’s best to keep our mouths shut, keep our heads down, and hope it’ll all blow over.

The surest way to come under personal assault is to speak with conviction on virtually any subject of consequence.

Pastors aren’t immune to these fears, and the temptation persists to simply align with one side or the other, finding safety in numbers. The church, however, needs leaders who have the courage to speak gospel-informed truth about the issues of the day.

Rather than simply affirming the intrinsic worth of all human life, pastors need the courage to condemn both abortion and also racism in their own communities. Instead of simply affirming which candidate seems to have the more biblical platform, pastors need the strength to shepherd individual church members who place an unhealthy measure of hope in the political process.

Like Elijah, we must decide whom we’ll fear: the Creator who made us or the creatures who want to silence us. We’ll either be “scared and running toward the glory of God, or scared and hiding underneath the glory of ourselves or of other people’s opinions of us” (49). Fearlessness isn’t an option. We’ll either fear God or fear man.

It’s one thing to overcome fear in the abstract. It’s another thing, though, to overcome the fear of people who really can and will inflict consequences based on what we say.

At first the critics seem easy enough to brush aside, but more often than not their arrows lodge deep in the soul of their target. The nagging whisper begins: What if they’re right? Like Elijah, the faithful pastor may at times wonder, Am I the only one?

Moore sees in this the debilitating power of shame, and observes of our present day:

[I]t simply is not true that we live in a time without judgment. . . . Our age has not replaced the Judgment Seat of Christ with nothing, but with a countless number of little judgment seats. Not only this, but the ultimate penalty of those judgment seats is the dispensing of shame and exile. Whether in a middle school cafeteria or in a theological seminary faculty lounge or in a nursing home game room, the ultimate punishment is to be told, “You are not one of us; go away.” That is shame. (72)

Counterintuitively, the Christian’s response isn’t to shun judgment, but to embrace the One who has withstood the ultimate judgment on our behalf. Moore wisely counsels that “power is not found in the way of domination but in the way of crucifixion” (135). The vulnerability this demands in the short term is the only means of attaining God’s power that will stand the test of time.

Elijah’s story is helpful precisely because we can identify with him, not only in his weakness but also in his eventual triumph with Christ. On the mountain of Christ’s transfiguration, “Elijah was not the point. He was there only basking in reflected glory. And, in fact, that’s the only sort of glory he had ever known or ever would know” (213).

Elijah’s story is helpful precisely because we identify with him, not only in his weakness but also in his eventual triumph with Christ.

I remember a conversation with my grandmother several years ago, toward the end of her battle with cancer. I sat in her hospital room shortly after she’d received discouraging news from her oncologist. I was struck by her apparent lack of fear after being told death was just around the corner. She said she wasn’t afraid of dying, and proceeded to tell me the story of when she first believed the gospel as a young girl in vacation Bible school. She knew Jesus had saved her, and that his power was sufficient to defeat the death she now faced.

It wasn’t many days later when we stood beside an open grave in a rural Alabama cemetery. We sang the hymn she had requested, based on 2 Timothy 1:12: “I know whom I have believed, and I am convinced that he is able to guard until that day what has been entrusted to me.”

The Courage to Stand thoughtfully expounds these truths and all they entail. The book is personal, biblical, and thought-provoking. It will be like an arm around the shoulder for believers enduring a season of fearful darkness.

Stephen Story is the executive pastor of Crawford Avenue Baptist Church in Augusta, Georgia. He is married to Dottie, and they have three children.

1 How Should I Address My Transgender Colleague?

4 The Gift of a Distracted Dad

5 When I Discovered I Had 3 Fathers

New research shows that children who remained faithful as young adults grew up in homes where certain practices were present.

Honoring Your Father When He’s Evil

Origins of Vice and Virtue: ‘Cruella’ and ‘A Quiet Place II’