“She would of been a good woman,” The Misfit said, “if it had been somebody there to shoot her every minute of her life.”

These words, near the end of Flanner O’Connor’s “A Good Man Is Hard to Find,” bounced around in my head as I made my way through Cormac McCarthy’s novel The Road. The man and son on the road live every day knowing that someone is there to shoot them, just around the bend, in the weeds across the ditch, or coming up behind them. Along with the constant threat, McCarthy’s spare prose builds a world in which trinkets and distractions have been stripped away. Neither color nor sunshine decks this landscape. The story confronts us with characters forced moment by moment to recognize what matters.

No lists of things to be done. The day providential to itself. The hour. There is no later. This is later. All things of grace and beauty such that one holds them to one’s heart have a common provenance in pain. Their birth in grief and ashes. So, he whispered to the sleeping boy. I have you.

The man and son in this predicament testify by their very existence that humans must live for others, else there’s no reason to live. And they show us that we cannot live without hope.

The World as We Know It

In the dream from which he’d wakened he had wandered in a cave where the child led him by the hand. Their light playing over wet flowstone walls. Like pilgrims in a fable swallowed up and lost among the inward parts of some granitic beast. Tolling in the silence the minutes of the earth and the hours and the days of it and the years without cease. Until they stood in a great stone room where lay a black and ancient lake. . . .

Like Dante finding himself in a dark wood, McCarthy’s pilgrim will be led through hell to love not by Virgil but by the child. Like Bunyan’s Christian he shoulders his pack, which he will lose on the way to the celestial city. Like Jonah this man’s journey and experience are in themselves a message that calls Ninevites to repentance. Like Plato McCarthy seeks to deliver us from the illusion of the cave to know what is real (“forms” are invoked throughout, as is the image of “philosophers chained to a madhouse wall”).

McCarthy’s pilgrim is loath to wake from dreams of the world as we know it, and McCarthy calls his audience to repent of discontented distraction and awaken to this world, the world of our dreams. At one point the man finds clean water, “water so sweet that he could smell it,” and he finds “Nothing in his memory anywhere of anything so good.” Savor your next drink of the same. 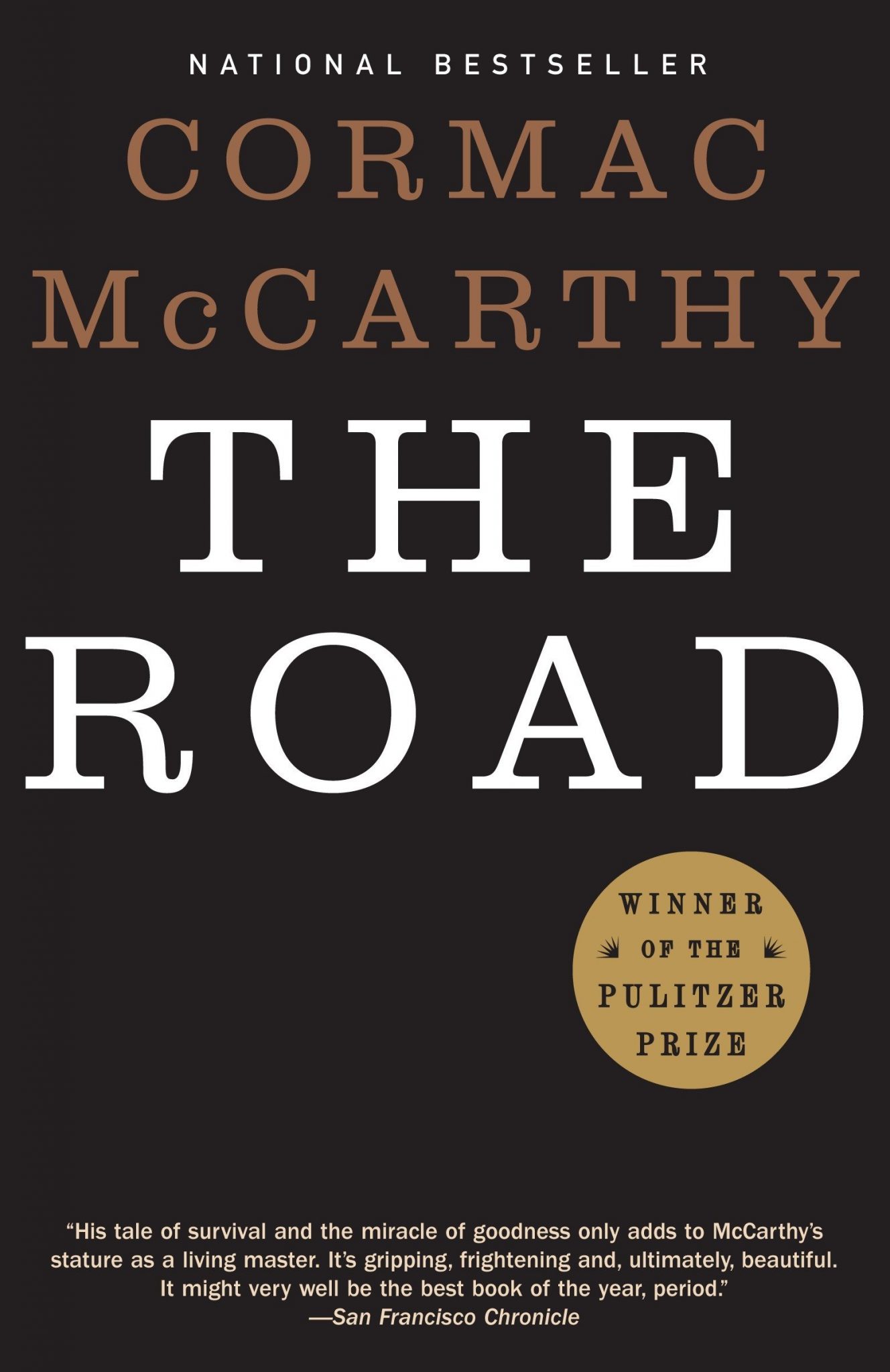 The Road is the profoundly moving story of a journey. It boldly imagines a future in which no hope remains, but in which the father and his son, “each the other’s world entire,” are sustained by love. Awesome in the totality of its vision, it is an unflinching meditation on the worst and the best that we are capable of: ultimate destructiveness, desperate tenacity, and the tenderness that keeps two people alive in the face of total devastation.

Like Job’s wife, the man’s wife gave up (the line “Curse God and die” appears in the novel, followed shortly by the suggestive word “Blessed”). She asserted that those who had survived were “the walking dead in a horror film.” She claimed that there was no counterargument, that she hoped “for eternal nothingness.” But the counterargument McCarthy shows—not tells—is faith, hope, and self-giving love. These show the bankruptcy of hopeless, faithless existence that ends in nothingness. The man even pled that his wife not kill herself with the words, “For the love of God, woman. . .”

McCarthy’s words depict a world of “The frailty of everything revealed at last,” and the story he sets in that world shows that when all else is gone hope, faith, love, and life remain, that a man knows no greater love than to lay down his life for another, that life itself—the fact that we go on living—argues against despair. The birth of the boy was the man’s warrant for hope and faith against the devastated despair of his wife that a child had been born into such a world. The man and his wife responded in opposite ways: to her the child was a sorrow that tore out her heart, to him a miracle aglow with goodness:

They sat at the window and ate in their robes by candlelight a midnight supper and watched distant cities burn. A few nights later she gave birth in their bed by the light of a drycell lamp. Gloves meant for dishwashing. The improbable appearance of the small crown of the head. Streaked with blood and lank black hair. The rank meconium. Her cries meant nothing to him.

Other religious answers are also contrasted. At one point man and boy encounter a traveler, “a starved and threadbare buddha,” and this traveler regards the world and his experience as though nothing matters. When the man asks the buddha, “How would you know if you were the last man on earth?” The buddha says to the man:

“It woudnt make any difference. When you die it’s the same as if everybody else did too.”

The man replies: “I guess God would know it. Is that it?

McCarthy condemns the buddha’s logic by presenting him contradicting himself with the retort: “There is no God and we are his prophets.”

The man meets the buddha’s nonsensical assertion that he is the prophet of a God who does not exist with a counterargument for the buddha’s indifferent rejection of God: “I dont understand how you’re still alive. How do you eat?”

The assertion “There is no God” is answered with the counter-assertion “you’re still alive.” The man seems to be suggesting that life itself is proof of God, evidence against meaninglessness.

To the question “How do you eat?” the begging buddha replies: “People give you things.” With these words the buddha confesses that apart from the Christian virtue of charity he has no hope of life. The man has countered the buddha’s rejection of God with the fact of the buddha’s ongoing life, and the buddha himself has acknowledged that the generosity of others sustains his life. The wider narrative makes plain that generosity and charity spring only from faith in God, from hope that God will deliver and provide, and from love that mimics the very love of Christ, who gave his life that we might live.

This conversation with the buddha shows that love is distinctly Christian. The buddha has no category for love, goodness, or kindness, and the man’s suspicious interchange with him also shows how essential trust is to human communication. God is basic to human kindness and essential to human dignity. That is to say, apart from God there can be neither kindness nor dignity. The buddha will not even wish the man and the boy luck, and McCarthy seems thereby to intimate that a belief in God’s providence undergirds the kind of luck the man knows the buddha will not wish him. As they leave him, the man tells his son, “There’s not a lot of good news on the road” (175). The buddha has no gospel.

The book opens with the man waking to grope for his son, earnest for reassurance that he is there, that they are safe. The book closes with the man going to sleep, choosing not to kill his son before he dies, clearly trusting that though he will not be awake to protect the boy, he can rest knowing that the boy will be safe. For this pilgrim, dying is an act of faith. They have not wandered in a cave but in a world without civilization, a world without forms. The forms are the world we now enjoy, if . . . if McCarthy’s Jonah can lead us to repentance by escorting us through the inferno, pilgrims making their way through the ruins of Vanity Fair. McCarthy seems to want us to know that the life we long for is the life we have.

James M. Hamilton Jr. (PhD, The Southern Baptist Theological Seminary) is professor of biblical theology at The Southern Baptist Theological Seminary and Senior Pastor of Kenwood Baptist Church in Louisville, Kentucky. He has written numerous books, including God’s Glory in Salvation through Judgment: A Biblical Theology and What Is Biblical Theology? A Guide to the Bible’s Story, Symbolism, and Patterns. He has recently completed a commentary on Psalms and is currently writing a book on typology.