Christianity has always been associated with conspiracy theories.

Jesus had only been out of the grave a few hours when his persecutors were paying off Roman guards to say the disciples stole his body. This was buried in the implausible lie that the guards knew the identity of the body snatchers, but had been asleep at the time (Matt. 28:11–15). The story was unlikely, but it was believed because it was convenient.

According to Tacitus, emperor Nero blamed Christians for causing a massive fire in Rome, which sparked a new outbreak of horrific persecution. As the emperor feared for his power, he had to create a common enemy that could be defeated to rally allies, diverting public focus from his atrocities. 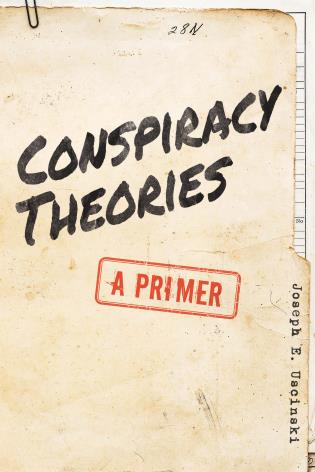 Conspiracy theories sprout up around struggles for power, whether in civil or denominational politics, and can lead to destructive responses. In his recent book, Conspiracy Theories: A Primer, political scientist Joseph Uscinski argues, “Conspiracy theories posit a powerful enemy whose goals may pose an existential threat to humanity” (5). Our polarized political climate is a natural breeding ground for conspiracy theories.

Our polarized political climate is a natural breeding ground for conspiracy theories.

Conspiracy theories are nothing new, but technology has introduced new challenges to culture by undermining epistemological authorities. The democratization of information made possible by the internet has empowered citizen journalists, magnified creative voices, and amplified the reach of some brilliant thinkers who might otherwise have remained unheard. The gatekeepers can no longer control the available content, and some have allowed their biases to undermine their attempts to fairly moderate content. As a result, it has become more difficult to find trustworthy sources of information.

Further, many conspiracy theories are non-falsifiable. In other words, any evidence for or against the theory is used to strengthen it, never to weaken it. Uscinski writes:

For the conspiracy theorist, the fact that we don’t have good evidence of a conspiracy only shows that the conspirators are good at covering their tracks. . . . But because of their non-falsifiability, conspiracy theories should not be thought of as true or false, but rather as more or less likely to be true. (27)

At some point, no evidence will shake confidence in a firmly held conspiracy theory, since the denial of a conspirator is only further evidence of the conspiracy.

What to Do About Conspiracy Theories?

The nature of conspiracy theories makes combatting them seem like a daunting task. Uscinski’s Conspiracy Theories is only a primer that purports to be a guide to the nature, popularity, virulence, and political implications of these theories. As a result, it does little to provide concrete solutions to the Hydra-like challenges that a culture saturated in conspiracy theories presents.

The best way to stop conspiracy theories is to cut off the flow of conspiratorial words.

Thankfully, Scripture gives us some helpful advice that will help us extinguish conspiracy theories from our midst. Just as a primary way to fight a wildfire is to remove fuel to stop the spread, the best way to stop conspiracy theories is to cut off the flow of conspiratorial words.

Here are a few ways that we can stop the spread of conspiracy theories:

Conspiracy Theories and the Christian Tongue

As James 3:6 reminds us, “The tongue is a fire, a world of unrighteousness. The tongue is set among our members, staining the whole body, setting on fire the entire course of life, and set on fire by hell.” We can’t effectively spread the gospel to our neighbors while demonizing them for their political views through conspiracy theories.

We can’t effectively spread the gospel to our neighbors while demonizing them for their political views through conspiracy theories.

Instead, James says, “The wisdom from above is first pure, then peaceable, open to reason, full of mercy and good fruits, impartial and sincere. And a harvest of righteousness is sown in peace by those who make peace” (3:17–18). This wisdom seems the polar opposite of conspiracy theories.

If we’re to be known for the renewing power of the gospel, we must delight in Jesus above all in our conversations. When Christians are purveyors of conspiracy theories, we undermine our ability to communicate the deeper truths with the power to bring healing to a broken world.