The rise of TOMS Shoes is perhaps the clearest sign of consumerism’s unimpedable progress. The company, which sends one pair of shoes to disadvantaged children for every pair of shoes it sells, has perfected the potent combination of social welfare and brand identity. But since at least the rise of the fair trade movement in the late 1960s, consumers have been repeatedly reminded of the moral dimensions of their purchases. At its best, TOMS attempts to engender ethical deliberation within the dominant consumerist mentality of our day. Yet in The Christian Consumer: Living Faithfully In A Fragile World, Laura Hartman sets out in a different direction. In attempting to articulate an “alternate ethos to that of consumerism,” she seeks to hold on to the moral questions of consumption without reducing our purchasing decisions to “styling the self,” which invariably happens in a consumerist ethos.

Hartman develops a fourfold typology through which we should examine our consumption: such decisions should avoid sin, embrace creation, love the neighbor, and envision the future. She does not set out to treat these as principles to be applied, but rather as “diverse lenses on one holistic vision for virtuous consumption.” Such lenses expose the challenges of navigating what are sometimes incommensurate goods in any decision, and as such provide a helpful grid.

For instance, her section on avoiding sin highlights those dimensions of the Christian witness that caution against excess in consumption and “complicity in the suffering of others.” She takes as her interlocutors Francis of Assisi, the Quaker John Woolman, and Ron Sider, examining how each of them emphasizes poverty, simplicity, or some combination of the two as alternatives to cultures of excess and luxury. Her discussion is appropriately nuanced—while she clearly privileges these voices, her endorsement is qualified. She offers a refreshing caution for this perspective by including the critique that voluntary poverty doesn’t actually help the poor.

Yet this is where Hartman’s typology really goes to work. She aims in the first section to demonstrate that the negative witness against vice is “necessary, but not sufficient” for determining what ethical Christian consumption looks like. She turns next to the affirmation of the material world, the embrace of creation, as a way of reminding readers that consuming for pleasure isn’t always and everywhere wrong. Embracing the paradox with both hands, she suggests, “Hedonistic self-denial—enjoyable ascetisim—is surely a key to ethical Christian consumption.” The paradox empowers a surprisingly sensitive reading of prosperity theology, acknowledging what it gets right (“[it] correctly asserts that every human, even the poorest, is of great dignity in God’s eyes”) while chastening it for its fatal mistake of replacing “a message of unearned grace” with “one of reward in response to proper prayers and behavior.”

I could go on, but these sorts of interesting reading fill the other two dimensions of Hartman’s taxonomy, loving the neighbor and envisioning the future. Her sources are broad enough to make anyone nervous, as she moves from Catholic social theory to Seventh-day Adventism to Wendell Berry and back out again. Along the way, readers will find lots to disagree with, like her flirtations with Eastern Orthodox notions of theosis. The effect of the barrage of sources is slightly dizzying—I enjoy this sort of theological carnival ride, your mileage may vary.

Broadly, Hartman’s book nearly accomplishes what it sets out to do. Even though I disagreed with many of the details of her proposals, her fourfold taxonomy provides an interesting set of questions to pose to consumption. But even more than knowing which questions to ask, Hartman models how to ask them, refusing to let reductionism on either side have the day. It was refreshing to see her acknowledge, for instance, that simply refusing to consume a product may have negative economic effects (the loss of jobs). And while her soft case for vegetarianism is (to me) ultimately inconclusive, she is judicious enough to leave it as a soft case, rather than making a stronger claim for the position.

And yet, for a book attempting to offer a theological account of consumption, there is a surprising lack of direct Scriptural engagement. As we might expect, there is some direct interaction with the parable of the Good Samaritan, and a smattering of allusions and references here and there, but almost all of her theologizing happens in dialogue with other commentators. While I have no doubt Hartman has a constructive way of reading the Bible that guides her positions, it seems fitting if we are going to navigate consumption as Christians to occasionally—even frequently—bring our engagement with Scripture to the surface. 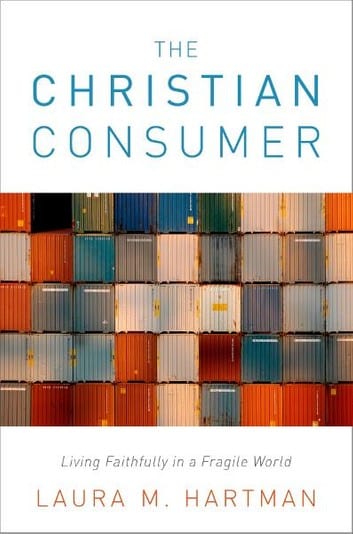 The Christian Consumer: Living Faithfully In A Fragile World

The Christian Consumer: Living Faithfully In A Fragile World

Be it fair trade coffee or foreign oil, our choices as consumers affect the well-being of humans around the globe, not to mention the natural world and of course ourselves. Consumption is a serious ethical issue, and Christian writers throughout history have weighed in, discussing topics such as affluence and poverty, greed and gluttony, and proper stewardship of resources. These voices are often at odds, however. In this book, Laura M. Hartman formulates a coherent Christian ethic of consumption.

What’s more, there is some lack of clarity about her method and the interaction of the four ways of looking at consumption. While she suggests that the “ideal is to attend to all four,” she also implies that they are occasionally pitted against each other in such a way that sin is unavoidable and we are forced to “choose appropriate priorities among them.” It remains unclear what basis we have, however, to choose one priority over the other. She quickly acknowledges the virtue of prudence, or “the ability to make ‘fitting judgments,’ and act on those judgments,” but the point is undeveloped, and there are no normative constraints on what counts as prudence.

Whether we can escape the ethos of consumerism is a genuine question. And the early returns on brands like Product (RED) or TOMS Shoes suggests the answer is the negative. Even ethical consumption stands in danger of being co-opted by the logic of brand identity and consumerism, and having its power muted as a result. Yet that does not excuse us as Christians from deliberating carefully about how to faithfully consume in a consumerist world. While The Christian Consumer is better at teaching us the questions to ask than it is answering them, its wide range and helpful taxonomy make the book a helpful dialogue partner in our path toward ethical consuming.