Alongside a few influential review magazines, Oprah’s Book Club has become an important arbiter of significance for new books. And yet, even without Oprah’s logo embossed as part of its cover, Isabel Wilkerson’s Caste: The Origins of Our Discontents would’ve drawn attention and wide readership. After all, Wilkerson won the Pulitzer Prize for her first book, The Warmth of Other Suns, that charted the Great Migrations of African Americans to Northern cities in the late-19th and early 20th centuries. That book was a profound and noteworthy historical telling.

Her new book is likely to be viewed the same way. Caste delivers an overarching telling of race in America by trying to connect it to global patterns. Through comparisons to caste structures in India (more obviously) and Nazi Germany (less so), Wilkerson means to illuminate the American situation so that we might more readily name the pervasive structural and presuppositional ordering that places white people (of different ethnic backgrounds) on top and black people (of different ethnic backgrounds) on bottom.

The result is a bracing and unsettling account, extremely useful for those who struggle with the idea of “structural racism,” though perhaps less illuminating and more despairing than Wilkerson intends. 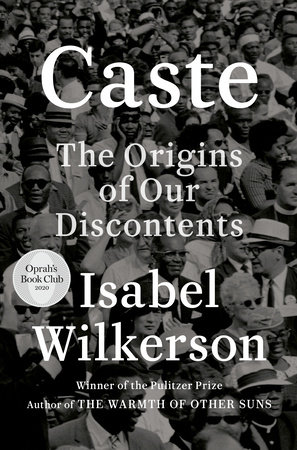 Caste: The Origins of Our Discontents

Caste: The Origins of Our Discontents

The first two parts of Caste—nearly 100 pages—attempt to help the reader understand what Wilkerson means when she uses the word “caste.” And so, caste is like a pathogen trapped in the cultural ice that might be released with deadly results; caste is like an undetectable leak in an old house that can cave the roof in. It is insidious, an invisible glitch in a computer program that regulates all of life. That’s why historical and cross-cultural work is necessary: going back in the American past and going across the seas to India and Nazi Germany will help Americans recognize how caste works.

What makes seeing caste so difficult is that it is structural in ways similar to and overlapping with race and class, but more pervasive and thus less recognizable. Caste is “an artificial construction, a fixed and embedded ranking of human value that sets the presumed supremacy of one group against the presumed inferiority of other groups on the basis of ancestry and often immutable traits” (17). And yet, caste and race “are neither synonymous nor mutually exclusive. . . . Race, in the United States, is the visible agent of the unseen force of caste. Caste is the bones, race the skin” (19).

Any action or institution that mocks, harms, assumes, or attaches inferiority or stereotype on the basis of the social construct of race can be considered racism. Any action or structure that seeks to limit, hold back, or put someone in a defined ranking, seeks to keep someone in their place by elevating or denigrating that person on the basis of their perceived category, can be seen as casteism. (70)

For her, caste is useful for getting at the structural nature of racism—caste and race overlap, but are not synonyms.

In part three, Wilkerson discusses eight pillars of caste. Perhaps for TGC readers, the first pillar (divine will and the laws of nature) and the fourth (purity versus pollution) will be the most interesting and provide connections with Christian history and theology. Undoubtedly, these eight pillars keep the structural racism that caste represents in place in the various cultures Wilkerson has studied. Some of the discussion—especially over dehumanization, terror and lynching, and inferiority—is heartbreaking for those of us committed to recognize God’s image in all human beings and the requirement for love in justice toward all human beings.

The next two parts offer a thorough discussion of how caste—this embedded structural reality—touches every part of human interaction and works destruction for oppressors and oppressed. For white people who have measures of power and privilege, these chapters are unsettling. And yet, reflecting on my own historical work as I read Wilkerson’s chapters on “the insecure alpha” and “last place anxiety,” I heard echoes of Robert Lewis Dabney, the 19th-century Southern Presbyterian theologian, who once declared:

I, for one, say plainly, that I belong to the white race, and that if I must choose between the two results, my philanthropy leads me to desire the prosperity of my own people, in preference to that of an alien race. I do not see any humanity in taking the negro out of the place for which nature has fitted him, at the cost of thrusting my own kindred down into it.

Moreover, in reading the consequences of caste—and thinking about friends who have endured profound racial attacks that created deep trauma, attacks because they dared to break out of the place that caste assigned them—the chapter on the “lethality of caste” rung true as well. Undoubtedly, what Wilkerson has described in these sections is a true phenomenon and has been present in American culture, including churches, for centuries.

The final two parts bring the account out of history and into the present and future. Using the lens of caste to look at the recent past and present, Wilkerson views the election of Donald Trump in 2016 as rooted in a deep, even subconscious, commitment to the dominant “white” caste remaining on top. Threatened by the election of Barack Obama in 2008, “white evangelicals” rallied to Trump because they entwined theology, whiteness, and conservative politics (330). In addition, the defense of Confederate symbols—monuments and flags—by many of these same conservative and evangelical voters manifests the structural reality of caste.

Waking Up to Caste

But what about the future? How do we experience an “awakening” that helps us recognize and deal with caste’s effects? Sadly, this is the shortest part of the book, just 27 pages. And it isn’t very hopeful—perhaps white women and men might be radicalized by tasting just a little bit what their black friends experience; perhaps a moment of human connection might allow whites to see their shared humanity with blacks; perhaps whites might know “radical empathy” toward their African American neighbors.

To be sure, all of these things are good and even necessary. Yet such a brief concluding word, after so much that is unsettling—especially because what Wilkerson describes is so often unseen and unrecognized—doesn’t represent much hope.

And that’s where I struggled with this book. To be sure, I have other questions: Why do we need “caste” as a descriptor when we have “structural racism” or “racialization” as a way of getting at these structural realities? How does racial difference operate within caste divisions? How does class operate within caste (which Wilkerson briefly addresses on page 106 before dismissing it entirely)? And I’m not sure that the parallel to Nazi Germany and their treatment of the Jews really works—just because it was a profoundly racial ideology.

Ultimately, though, as I read this book, I struggled with hope. If caste is a profound, pervasive structural reality, how do we change? If change can only come through coercive uses of power, American history can tell you how well that works—and even America’s greatest successes in this area can be chipped away over time as a result of caste commitments. And not simply how do we change, but why would we change? Even after 2042, when whites may no longer be the majority race, they will still be the largest in the plurality of races and will still have the most influence, power, and privilege. There would be no advantage for whites to give up their place in the hierarchy. So, can there be any real change toward a more equitable world, one typified by genuine justice and love?

It’s right here that we can be helped by two men who have been in the struggle for racial justice. Bryan Stevenson, executive director of the Equal Justice Initiative, reminds people frequently that “hope is your superpower. Don’t let anyone or anything make you hopeless. Hope is the enemy of injustice.” Hope isn’t just wishing; real, biblical hope is the earnest expectation that justice will be realized. In a similar fashion, as Jon Meacham’s new book on civil-rights leader John Lewis reminds us, Lewis’s commitment was ultimately to the power of hope: people can change, justice and peace will be embraced, and the profound tragedy of racism and even caste can be redeemed.

At the end of the day, only hope rooted in the gospel will lead to justice. It will allow us all—white, black, and brown—to listen, to empathize, and to demonstrate intentionality in working with one another toward equitable solutions. Only such hope will also lead to what our world desperately needs: patient engagement and costly solidarity, longsuffering forgiveness and Christlike love.

Only such hope will solve the discontents caused by caste.