Author Dallas Willard is one of evangelicalism’s most influential voices over the last quarter-century. Though he died nearly two years ago, a significant amount of his material is still being released. One such posthumously published book is The Allure of Gentleness: Defending the Faith in the Manner of Jesus, a compilation of presentations and writings on apologetics brought together by Willard’s daughter, Becky Willard Heatley. “Apologetics is serious work to help people—Christians and non-Christians—resolve issues of doubt,” Willard contends.

In The Allure of Gentleness he seeks to do this serious work and teach others how to do apologetics in the manner of Jesus. The book is helpful, unique, and sometimes theologically provocative; it is an important addition to the conversation of how we ought to contend for the faith in an increasingly doubt-filled world.

Overview of the Landscape

The Allure of Gentleness is divided into seven chapters. Chapter 1 begins with definitions of knowledge and truth, and the need for discipleship in apologetics; chapter 2 deals with doubt and the fundamental need for Christian apologetics to be more than a defense of right ideas; chapters 3 and 4 consider faith, reason, hell, a biblical approach to apologetics, and Willard’s rationale for a Creator; chapter 5 is his take on the God of the Bible and a case for the veracity of the Scriptures; chapter 6 covers his answers to the problem of pain and evil; and chapter 7 asserts the need for a personal, active relationship with God if our apologetic endeavors are to be effective.

Overall, Willard covers what anyone must if he is to effectively address the topic of apologetics. Occasionally, he takes unhelpful theological detours.

There is much to love about this book. One of Willard’s most helpful reminders is his assertion that serious thinking is necessary if we are to engage in effective apologetics. For many, both inside and outside the church, there is ea fear that thinking might knock down the walls of faith. Willard writes, “This reminds me of the definition of faith by Archie Bunker, a character on the 1970s TV show All in the Family: ‘It’s what you wouldn’t believe for all the world if it wasn’t in the Bible.’” Willard believes this type of shallow faith is destructive for rigorous Christianity. For him, serious thinking is the way forward: 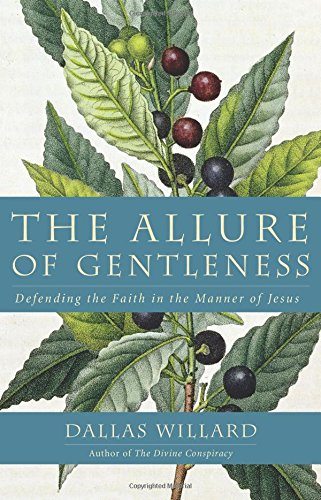 The Allure of Gentleness: Defending the Faith in the Manner of Jesus

The Allure of Gentleness: Defending the Faith in the Manner of Jesus

Drawing from John Stott and Martin Lloyd-Jones, Willard artfully shows how reason and logic can help us see the truthfulness and reality of our Christian faith. Always the professor, Willard offers helpful examples of logic and deductive reasoning and demonstrates why Christianity is based on knowledge and not mere belief.

A gift from this book is that Willard invites doubters—Christian and non-Christian alike—to come out into the open. For many, doubt is seen as either the enemy to keep away or the problem to hide. This avoidance has done serious damage. “As a teacher at a university,” Willard remarks, “I deal with many, many students who have not been encouraged in their churches to be honest with their questions and doubts.” The result, he says, is that “students are not equipped to think about the issues that come up in that environment, and they often leave their faith.”

Instead of hiding from doubt, Willard offers a better way: “[It’s] so important that our fellowship be open and that people, especially young people, feel encouraged to admit and talk about their doubts; they are a good thing to talk about.” This is Willard at his best. Doubt need not be a threat. Instead, doubt can be a doorway to Christian community.

Another important contribution is Willard’s deeply held conviction that the greatest apologetic is one’s life. “The ultimate apologetic—that is to say, the ultimate lifter of doubt—is the believer acting in faith in an interactive life with God,” he observes. “That’s it. People need to see individuals living in daily interaction with the kingdom of the heavens.” When the life of Jesus flows within us, people will be drawn to us, curious to discover what’s different about us. Successful Christian apologetics isn’t just facts; it’s an embodied message. When we live out what we proclaim, people will listen. This is quintessential Willard.

While there is a lot of good in this book, there’s one overarching reason I think every serious follower of Jesus should read it. Willard insists throughout that the way we engage in apologetics matters just as much as whether we win the argument:

[If] we are seeking to do apologetics in the manner of Jesus, what is not fitting is for apologists to engage in debates and arguments with an antagonizing, arrogant spirit. Indeed, the best way to make the intellectual aspects of apologetics more effective is to combine them with a gentle spirit and kind presentation.

“I’ve never seen a person helped by being belittled,” he proceeds to observe. Instead, the goal of apologetics is to be helpful in a kind manner. Apologetics ought to assist men and women to believe in Jesus and enable them to more fully follow him. This spirit of helpful gentleness is the hallmark of this book. What a refreshing gift. How much good would be done if church leaders took Willard seriously? I wonder what would happen in our conversations, discussions, and debates with those on the “other side” if we sought to assert the truth with gentleness, love, and a good dose of humility. This is what Willard wants us to know: we can actually stand for the truth while loving our opponents in the process. This is a corrective Willard offers the church; we would do well to listen.

There are two areas of concern with the book. The first is his discussion about hell. “The only reason there is a hell is because God makes provision for what people want,” he writes, “and hell is simply the best God can do for some people.” He doesn’t deal with the biblical reality of God’s judgment or how sin will eternally separate a person from God’s presence. If you follow Willard’s ideas about hell to their conclusions, it seems possible a person in hell could be released if she decided she wanted to be with God. I wish Willard had explicitly spelled out how sin brings eternal judgment and how the cross of Christ is our only hope for salvation from God’s wrath.

The other area of concern is on the issue of the Bible itself. Willard seems to affirm the inerrancy of the Scriptures: “My belief is that as God gave the Scriptures, in their original form, they were absolutely perfect.” Then he qualifies his statement: “But I don’t know of any scholar, no matter how conservative, who would point to a particular version of the Bible in any language and say, ‘That one is inerrant.’” And then he seeks to provoke the reader: “To be a biblical Christian is not to have high views about the Bible. It is to seek and know and live the life that is depicted in the Bible.” This whole section is unnecessarily provocative, and he’s unclear about the nature of the translations we have today. Willard tells us modern translations are “reliable” but doesn’t tell us why. Are they inspired and inerrant? If not, what do they lack? Answers to these questions are vital for a Christian apologetic. We must have a high view of Scriptures and we must seek to live the life Jesus offers. We don’t need to choose between the two. This is the weakest section in the book.

Even in the areas of disagreement, I still gain valuable insight. Willard isn’t afraid to humbly think through things and, at the same moment, invite us to do the same. For him the goal is not to win an argument but to discover what’s true about God and the world. As he would often remark, “I am sure I am wrong about some of these things.” He probably is. But he’s right about many things, and he’s a good guide for those of us who want to do apologetics the way Jesus intended.

In The Allure of Gentleness we’re reminded we can tackle the most challenging issues of our time with gentleness and confidence. We can stand for what is right without anger or a need to win. You may not agree with everything Willard says, but you will find that his vision for Christian apologetics is compelling.

​​Ron Citlau is the lead pastor of Calvary Church near Chicago. He is married with four boys and is the co-author of Compassion Without Compromise: How the Gospel Frees Us to Love Our Gay Friends Without Losing the Truth (Bethany House, 2014). You can connect with him on Twitter or Facebook.