For anyone who likes church history, Justo González is a familiar name. His two-volume work, The Story of Christianity, is frequently read in seminaries and Bible colleges. A Cuban American, González is a Methodist historian who has written extensively over the last three decades. Most recently, he has written a short book titled A Brief History of Sunday: From the New Testament to the New Creation.

González is not writing a history of the Sabbath, or how the Sabbath developed into the Lord’s Day, but a history of the first day of the week. He surveys the way Christians, from the first to the 21st century, have treated Sunday. He shows when the concept of rest developed in church history, and how the West has both embraced and rejected the church’s Sunday liturgy.

Here are seven things we learn about the first day of the week:

1. The Importance of the First Day Starts in Scripture.

Scripture reports that the New Testament church gathered to worship on Sunday (Acts 20:7; 1 Cor. 16:2; Rev. 1:10). But Scripture doesn’t use the word Sunday, a name associated with sun worship (12–14). Instead, the early church spoke of Sunday as the first day of the week, or the first day from the Sabbath (9).

2. The Early History of Worship Is Not the Same as Our Sunday Morning Traditions.

Jews marked time “from sunset to sunset.” Therefore, while we might assume that churches meeting on the Lord’s Day met on Sunday morning, Acts 20:7 indicates Christ’s disciples met at night “on the first day of the week”—remember poor Eutychus falling asleep late at night and falling out the window! Under the Jewish calendar churches gathered on Saturday night, not Sunday (22).

It wouldn’t be long before the church met on Sunday mornings, but it’s worth remembering how easily we can superimpose our church traditions on Scripture. We do well to learn what the early church actually practiced. In the earliest days, worship consisted of Sabbath-keeping and resurrection-celebrating on two different days. In time, the former decreased and the latter persisted, but as González observes, “the notion that Sunday has taken the place of the Sabbath is notably absent from early Christian literature” (23).

If Sunday didn’t replace the Sabbath, what did the earliest Christians think about the day? González lists three theological factors for worship on Sunday. First, it was the day Christ rose from the grave. This is what makes Sunday the Lord’s Day (domingo) and why the New Testament church gathered on this day (24–27). Second, it was the first day of a new creation. As 2 Corinthians 5:17 identified believers as new creations in Christ, so the first day after the Sabbath would, according to Genesis, have been a day of (new) creation. Third, Sunday was also the eighth day, a day that both related to circumcision and also “the final day of eternal rest and joy” (29).

Altogether, the early church saw Sunday as a day full of symbolism. Physical rest akin to the Mosaic law, however, was not at first part of that symbolism. Instead, resurrection and new creation provided the typological substance.

4. Sunday Became a Day of Rest under Constantine.

For the first three centuries of the church, there was “no expectation that on the Lord’s Day one is to rest from one’s labors” (39). Roman slaves had to work on that day. Not until Christendom shaped commerce did Sunday become a day of rest.

Not until Christendom shaped commerce did Sunday become a day of rest.

The first mention of Sunday rest was issued by Constantine. González cites an edict written in March 321 (Codex Justinianus 3.12.3): “On the venerable day of the Sun let the magistrates and people residing in cities rest, and let all the workshops be closed” (43). He shows that Christendom initiated by Constantine led to the practice of Sabbath-keeping on Sunday.

This evidence challenges Sabbatarians to consider the way in which the history of Sunday and Christianity as a state-sponsored religion has influenced their views of the Sabbath. 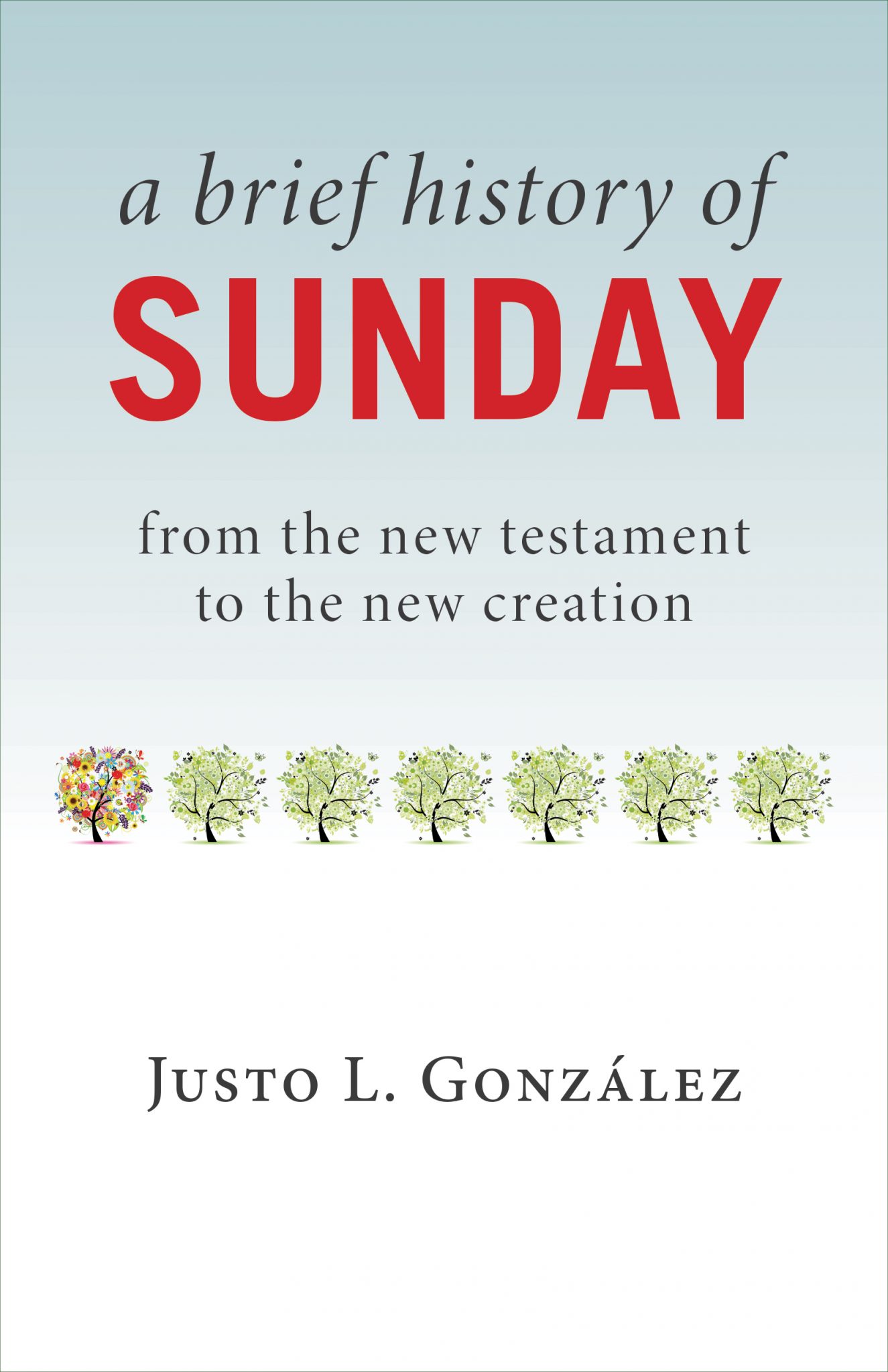 A Brief History of Sunday: From the New Testament to the New Creation

A Brief History of Sunday: From the New Testament to the New Creation

In this accessible historical overview of Sunday, scholar Justo González tells the story of how and why Christians have worshiped on Sunday from the earliest days of the church to the present.

After discussing the views and practices relating to Sunday in the ancient church, González turns to Constantine and how his policies affected Sunday observances. He then recounts the long process, beginning in the Middle Ages and culminating with Puritanism, whereby Christians came to think of and strictly observe Sunday as the Sabbath. Finally, González looks at the current state of things, exploring especially how the explosive growth of the church in the majority world has affected the observance of Sunday worldwide.

5. The Mood and Practices of Sunday Changed over Time.

In the early church, the Lord’s Day celebrated Christ’s resurrection and the dawn of a new creation; in the Middle Ages, it became more like a funeral. Sunday worship lost its joyful tenor and was driven by “fear of excommunication” (82).

In this same era, legislation commending cessation from work continued (83). Spiritual divines urged prayerfulness on this day, but in reality dances and other forms of revelry exploded (87–89). Many who celebrated Mass also participated in such festivities—making Sunday a rather confused day of “prayer and play.”

When reform came to the church, great strides were taken to change practices of worship, including the calendar. That said, González observes how the reformers did little to recover the Sunday practices of the early church. Instead, they continued to worship on Sunday more out of “convenience” than theological conviction (113). Likewise, they imported new symbolism into the day. For some the day of rest reminded that “no human work can merit the grace of God” (113); for others it was a way to protect workers from exploitation (114). In all, the relationship between the fourth commandment and Sunday practice differed widely.

6. The History of Sunday Has Been Shaped by Sabbatarianism.

In Puritan England, the idea of the Sabbath was applied to Sunday. In that period, the entire nation slowed down on Sunday, and three theological reasons arose to support this practice. First, there was agreement that a “connection between Sabbath and creation” entailed a “moral precept that all must obey.” Second, under the new covenant it was not the day of the week that mattered so much as the practice of rest. And third, proper rest required “detailed and exacting legislation.”

In both the confessions of the church and also the national laws of England, there was a strict adherence to practicing rest on Sunday. Naturally this practice led to all manner of debate, but in English Christendom, Sabbatarianism won out, and “blue laws” became the norm in England. Then, because of England’s influence on the founding of America, those same practices appeared in New England, which in turn has shaped American Christianity.

It’s impossible, therefore, to understand Sunday in the West without seeing how Christianity rightly or wrongly formed that day. Even today, “blue laws” continue in some places. And though Sunday has experienced a great secularization, the church itself has sought to recover this day as one set apart for the Lord.

Over time, European languages retained pagan day-names, but “in most romance languages, the name for the seventh day of the week reflects the Jewish Sabbath” (16). For instance, English Puritans had no linguistic problem transferring the Sabbath to Sunday, but Spanish speakers could make no such transition. How could the Sabbath change to Sunday when Saturday was called sábado and Sunday domingo?

Here’s an important reminder for English speakers: we need to read non-English speakers. Whereas a native English speaker may see no trouble in transferring the Sabbath to Sunday, this is only because of his linguistic context. While Scripture remains the ultimate arbiter, in debates over the Sabbath, one’s language will play a sizable role.

Consider Their Ways. Imitate Their Faith.

Whatever one’s position on the Sabbatarian question, González’s A Brief History of Sunday is helpful. While theologically minded readers may go away frustrated that he doesn’t evaluate history with a theological lens, his book identifies key points in the history of Sunday, which theologians must consider.

Indeed, the great benefit of this book is that in our secular age, it teaches us that we must protect Sunday. Why? To implement “thick” cultural liturgies in order to shape disciples to worship God in Spirit and truth. While we may never recover a Puritan Sabbatarianism, we must set aside space and time to gather for worship and discipleship.