J. R. R. Tolkien was born 130 years ago on this day in Bloemfontein, South Africa. Based on sales figures alone, he may be the most significant author of the 20th century. But in Christian circles, Tolkien is so beloved that we’ve become dull to his genius. We now encounter his work diluted in Peter Jackson’s films and tired sermon illustrations. If you met the man, however, you’d encounter an eccentric genius whose strongly held ideas and interests would now alienate most.

But it’s this Tolkien—the curmudgeonly, humdrum, Latin mass–loving Catholic professor of dead Germanic languages—who wrote The Lord of the Rings. Whether you find Tolkien’s world engrossing or just don’t get the appeal, it’s worth asking how a man so far outside the mainstream of fashionable thought could craft an unprecedented and bizarre epic that captured the depth of human nobility and yearning. To answer that question, these five books will take you on a journey into Tolkien’s world and our deep past. 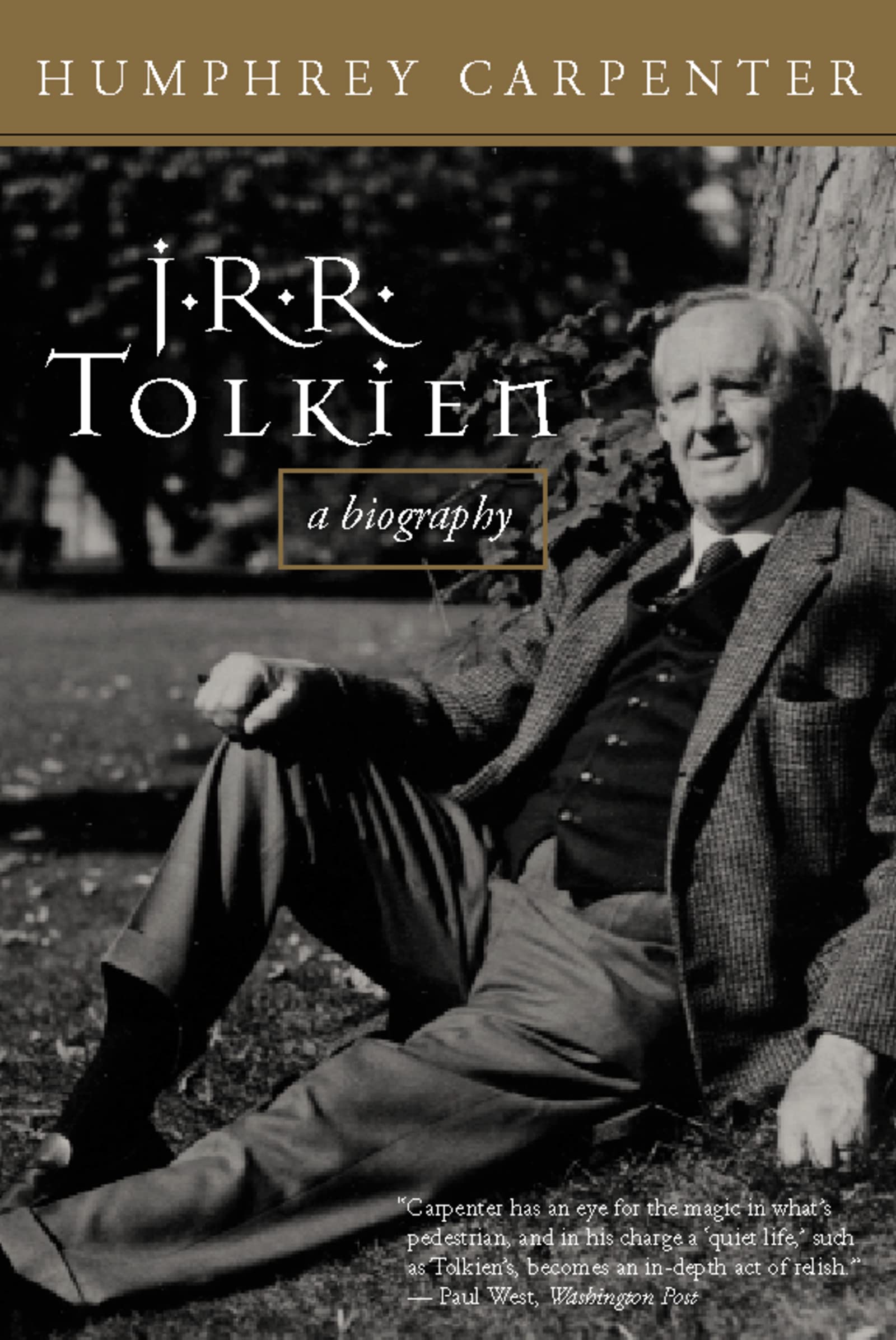 The authorized biography of the creator of Middle-earth. In the decades since his death in September 1973, millions have read The Hobbit, The Lord of the Rings, and The Silmarillion and become fascinated about the very private man behind the books. Born in South Africa in January 1892, John Ronald Reuel Tolkien was orphaned in childhood and brought up in near-poverty. He served in the first World War, surviving the Battle of the Somme, where he lost many of the closest friends he’d ever had. After the war he returned to the academic life, achieving high repute as a scholar and university teacher, eventually becoming Merton Professor of English at Oxford where he was a close friend of C. S. Lewis and the other writers known as The Inklings.

Then suddenly his life changed dramatically. One day while grading essay papers he found himself writing “In a hole in the ground there lived a hobbit”—and worldwide renown awaited him. Humphrey Carpenter was given unrestricted access to all Tolkien’s papers, and interviewed his friends and family. From these sources he follows the long and painful process of creation that produced The Lord of the Rings and The Silmarillion and offers a wealth of information about the life and work of the twentieth century’s most cherished author.

In 1977, Carpenter wrote the first full-length, authorized biography of Tolkien and to this day it may be the best. Tolkien is a difficult man to chronicle because, with the exception of his military service, he lived an externally boring life. He never left Oxford after he arrived, rode his bicycle to work every day, published relatively little academically, loved trees and landscape and place, vacationed in the same seaside town every year, hated French cooking, struggled chronically with finances, was a faithful though somewhat distant husband and father of four, and lived well within his own head.

Carpenter has done an admirable job of turning the bare facts of Tolkien’s life into a story and a picture of the man. Carpenter is undeniably a fan, so the biography is laudatory but not entirely uncritical. This is the best place to start to appreciate Tolkien, his context, and his mind.

To delve into the depths of Tolkien’s creative process and appreciate his accomplishment and influences, read Tom Shippey. Shippey is one of the most credible critics of Tolkien’s work because he himself is a trained medievalist who once taught the same curriculum as Tolkien. He skillfully shows that the roots of Tolkien’s mythology lie deep in the collective memory and fossilized language of “the North,” i.e., the Germanic and Scandinavian literatures of old. The names of the 12 dwarves in The Hobbit can all be found in ancient Finnish epics. The name Gandalf means “staff elf” in Old English, which Tolkien imagined into the figure of a wizard. By imagining a common linguistic and mythological past beyond the shores of history, Tolkien personally accomplished a genius renovation of the cultural memory of Northern Europe. Shippey argues that nothing else like this has ever been attempted, let alone accomplished to the tune of more than 100 million copies sold.

3. The Fellowship: The Literary Lives of the Inklings by Philip and Carol Zaleski

“No one ever influenced Tolkien,” C. S. Lewis once quipped, “You might as well try to influence a bandersnatch.” Famously, though, Tolkien didn’t live and write in a vacuum but in a close-knit literary community at Oxford—the Inklings of lore and legend. Many hopelessly fawning books have been written about this circle, but the Zaleskis’ is probably the best and certainly the most sophisticated. A massive work of collective biography and literary criticism, this engrossing, critical, yet eminently respectful study is a deep dive into Tolkien’s friendships with the men closest to him during the most creative and productive decades of his life.

Although they spend equal time on C. S. Lewis, Owen Barfield, Charles Williams, and Tolkien, the Zaleskis put Tolkien into context and particularly develop the literary aspects of his thought and his biography in a nuanced and even poignant way. What emerges is Tolkien’s lifelong, craftsman-like dedication to his own inner world, his singular and unflagging personal literary vision, and the debt of encouragement that Tolkien owed to this circle of friends.

4. Tolkien and the Great War: The Threshold of Middle-earth by John Garth

Before the Inklings, there was the T.C.B.S.—the Tea Club and Barrovian Society. This group of four bosom friends came together in secondary school and stayed thick as thieves through university at Oxbridge, but on the mud-rutted fields of the Somme it was torn apart. “By 1918,” Tolkien wrote, “all but one of my close friends were dead.” Tolkien finished university under a death sentence. Oxford was a ghost town turned drill yard in 1915 when he wrote his graduation exams with just eight other men. Tolkien graduated, married his high school sweetheart, went on a honeymoon, then reported for duty expecting all the while never to come home (42 classmates from secondary school were killed in 12 months). Under this cloud and in this circle of companions, his mythology first began to take shape. He invented languages, wrote his first epic poems, and in a convalescent hospital while the war raged on in France he wrote the first real stories that would become the legendarium of Middle-earth.

John Garth has written an incredibly well-researched and intelligent account of Tolkien’s early years from university through the Great War. Blending careful biography, painstakingly reconstructed military history, and insightful literary criticism, but without overreading the evidence, Garth crafts a compelling and compassionate account of how these early friendships and this shared set of traumatic experiences shaped Tolkien and his imagined world.

My favorite window on Tolkien is his own letters. “Tollers” comes to life through his own pen, particularly against the backdrop of the biographical works above. His dry wit, intellectual prowess, cantankerous nature, persistent struggles, sentimental tenderness, deep faith, perfectionistic tendencies, and creative flair are nowhere more clearly displayed. Most of these letters are addressed to close friends and family, especially his wife and children. In some of the most fascinating, he writes to the likes of W. H. Auden and his publishers to unpack his vision for his work in the fullest detail that he probably ever put down on paper. At least one of these letters amounts to a 10-page philosophical and theological essay on the meaning of Middle-earth. In some particularly poignant letters, he encourages his son stationed on the front lines of WWII with his own traumatic memories from the front lines of WWI. But I found most moving the memories of his wife, Edith, that he sent to his children just after her death. Here we get a rough self-portrait of the husband, father, and friend as those closest to him must have known him.

We live in a time of narrow vision. We cultivate thin memories. Tolkien lived about 1,000 years in the past where he cultivated an atavistic moral aesthetic. From this vantage point, a Catholic professor wrote an ostensibly pagan mythology that spoke to the deepest longings of atheists and evangelicals alike. Getting to know Tolkien opens up a thick reading of his work. It may even broaden your vision of yourself and the world because The Lord of the Rings, despite the fact that its lead characters are hobbits, is the most human of stories. Tolkien’s genius was to show through forgotten symbols and reimagined narratives that the substance of the Christian story flows like a subterranean current under the experiences of all peoples. As Tolkien himself explained to Lewis, “materialistic ‘progress’ leads only to a yawning abyss and the Iron Crown of the power of evil,” but “the myths woven by us, though they contain error, will also reflect a splintered fragment of the true light . . . they steer however shakily towards the true harbour.”

Alex Kirk (MDiv, Reformed Theological Seminary) is visiting professor of Old Testament at William Tennent School of Theology, a ministry partner/global instructor with Training Leaders International, and a PhD candidate in theology and religion at Durham University. He has been married to Meghan for more than a decade, and together they have three small daughters, Ruth, Willa, and Janie.