The surprising fact about today’s evangelical “identity crisis” in North America is that nothing about it should be surprising. The conflicts and tensions in the movement today have been present for decades (centuries even), and the strengths and weaknesses of the movement are so tightly intertwined that one can hardly imagine evangelicalism without its positives and negatives. 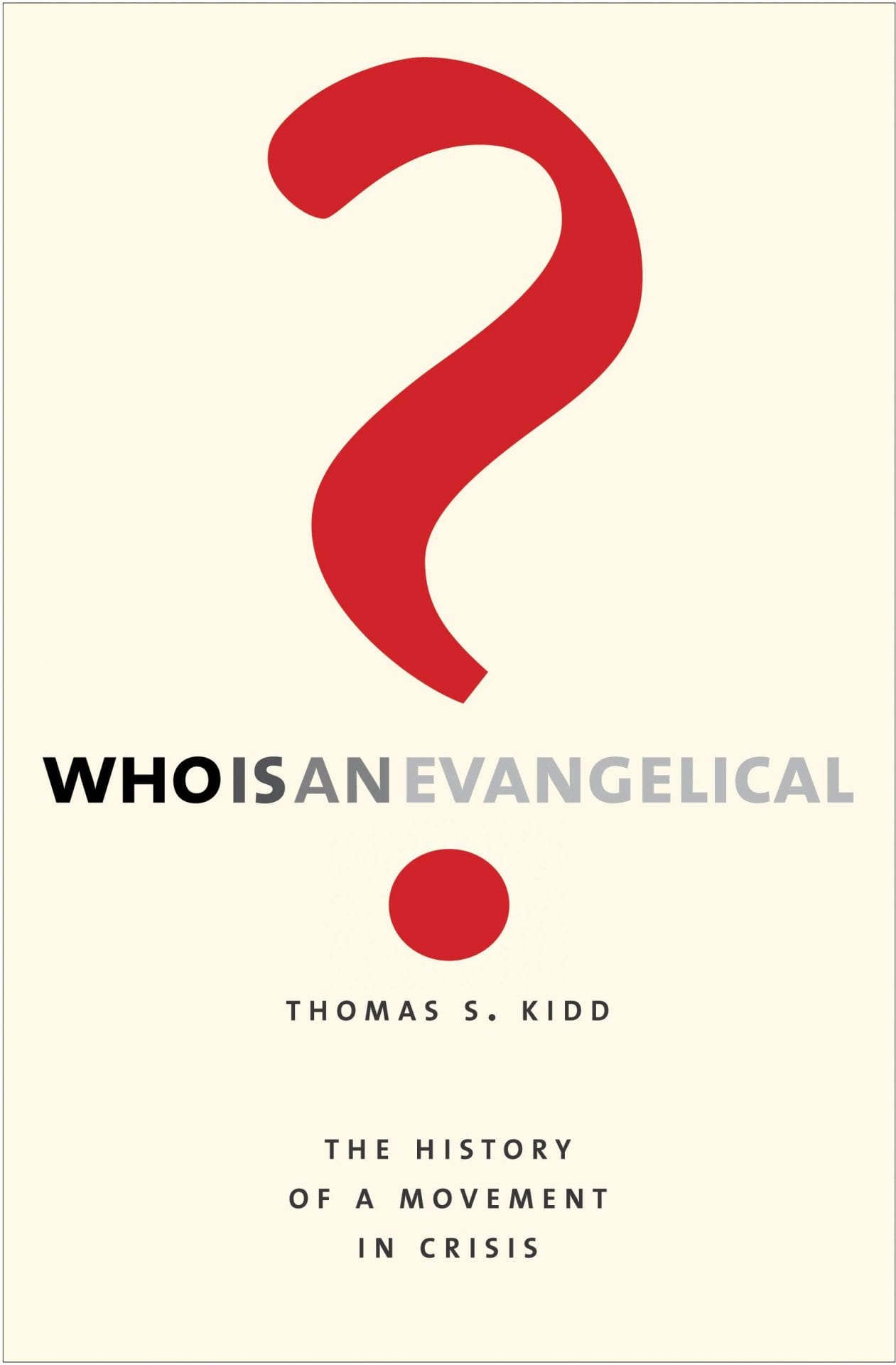 Thomas Kidd’s excellent new book, Who Is An Evangelical? The History of a Movement in Crisis (published by Yale University Press), offers a brief introduction to evangelical history in North America as well as a snapshot of current debates over evangelical identity. It is “historically peculiar,” Kidd says, to adopt a “partisan and ethnic” definition of evangelicals (1). Evangelicalism has been multiethnic from the beginning; whites do not constitute “normal” evangelicals; and the political elements movement in recent decades do not define heart of evangelical identity (4).

Yet the story Kidd tells is marked by ironies that show up throughout the movement’s history—ironies that help us spot contradictions and conflicts that continue to affect us today.

Let’s start with defining our terms. What does it mean to be evangelical? Kidd’s short description is “the religion of the born again”:

Evangelicals are born-again Protestants who cherish the Bible as the Word of God and who emphasize a personal relationship with Jesus Christ through the Holy Spirit. (4)

Kidd’s definition distinguishes evangelicals from modernists or liberals who question the reliability of the Bible, but it also distinguishes evangelicals from traditional Protestants who do not emphasize the experience of being “born again” or the ongoing importance of a personal relationship with God through Jesus and the Spirit. On the latter point, Kidd’s definition makes historical sense; early evangelicals faced opposition from Protestants who championed the primacy of the Bible but looked askance at evangelical enthusiasm regarding one’s conversion or experience with God. (An interesting observation from Kidd here: before the rise of Pentecostalism evangelicals spoke more of their relationship to God through the Holy Spirit than of a personal relationship with Jesus.)

Kidd’s three-part definition of an evangelical departs from David Bebbington’s famous “quadrilateral” (biblicism, conversionism, crucicentrism, and activism), because he doesn’t believe crucicentrism and activism serve as distinctive marks of evangelicalism. The focus on the new birth and the felt presence of God distinguish evangelicalism from other Christian streams (20). (For a look at how other scholars define the spectrum of evangelicalism, see my four-part review of a Zondervan Counterpoints book on this topic.)

Throughout Kidd’s work, we find surprising combinations within evangelical history, ironies that lead to some of the contradictions and conflicts we continue to experience.

The first area of tension rises from the fact that evangelicalism has been primarily a spiritual movement, not a political or social one, even though the boundaries were blurry from the beginning. Kidd traces many of the movement’s inherent tensions and contradictions back to George Whitefield, the evangelist who perhaps more than anyone else in his time emphasized the need for conversion and the work of the Holy Spirit. Yet once the evangelical movement grew more established, “political affairs and the power of the British Empire increasingly blended with [Whitefield’s] message of the Savior’s gospel. The blurring of power, politics, and gospel was a temptation even for the creators of the original evangelical template” (21).

2. Multiethnic but Marked by Racism

The spiritual but political irony leads to another—the strange combination of multiethnic origin with racist ideology.

Returning to Whitefield as an example, the great evangelist became a pro-slavery activist who sought to legalize slavery in Georgia. Yet he was also instrumental in converting and inspiring African American evangelical leaders like Olaudah Equiano and Phillis Wheatley.

Evangelical Christianity contains a powerful egalitarian impulse. . . . But white evangelicals have often been reluctant to let their spiritual beliefs inform their views of racial oppression and inequality. (23)

The effects of both multiethnic ministry and racist ideology have been present in subsequent centuries. In the first half of the 20th century, “white fundamentalists were more likely to condemn booze or liberal theology than lynching” (66). In the latter half, John Perkins—who later became one of evangelicalism’s most prominent voices on racial reconciliation—was arrested and viciously beaten by highway patrol officers and a sheriff named, no joke, Jonathan Edwards (100).

To be fair, Kidd notes, white modernists were as reticent as white fundamentalists to address racial violence. Apathy toward injustice is not an evangelical hallmark that distinguishes it from other streams of Christianity. Yet evangelicals have regularly fallen back on the first irony (“we are spiritual, not political”) in order to justify a carefully selected list of which societal ills the church should address:

Whether an evangelical regarded a sermon topic as unduly “political” depended a great deal on his or her ethnicity and social standing” (66).

In spite of all this, the evangelical movement was multiethnic from the beginning, and even today it far transcends the typical equation of “evangelical” with “white Republican.” Kidd is right that “the ministries of immigrant-led churches are perhaps more representative of evangelicals than the political labors of the Republican evangelical insiders, in spite of the disproportionate news coverage given to the latter” (110). (Case in point: the new president of the National Association of Evangelicals is Asian American.)

A third irony shows up in the relationship of evangelicals to the state. In the early days, evangelicals sought religious protections as dissenters from the views of the majority, and thus they lobbied for a clear line of demarcation between the church and state. The First Amendment proved to be a great victory in this regard. Later evangelical leaders like John Leland supported nonevangelical presidents who promised to maintain protections for dissenters and clearly distinguish between church and state.

Another irony shows up in the fact that evangelicalism is a movement that crosses denominations while remaining tied to them, while the culture of evangelicalism seems to be driven more by celebrity pastors and teachers and parachurch organizations. Doctrine matters to evangelicals because of the primacy they gave to the Word, and yet a leader or organization’s brand or voice usually matters more than doctrinal debates do.

The positive side to this approach is the nimble and nonbureaucratic style that leads the movement to flourish in creativity. The downside is that this arrangement promotes “an ahistorical mindset, a penchant for the flashy, and a lack of institutional ballast and accountability” (59). Celebrity “brands” bring about both evangelical “success” and shallowness.

The final irony that shows up in Kidd’s book is the reality that evangelicals are more often associated with political power than charitable work, the latter being so powerful that even outsiders acknowledge it with awe (see Nicholas Kristof, for example). Roughly 40 percent of self-defined evangelicals do not even exercise their right to vote in a presidential election, but evangelical involvement in cross-cultural missions, volunteer engagement, and disaster relief is so high that we can safely say that charitable giving is a “more constant attribute of evangelicals than Republican political engagement” (153). Kidd writes:

Practicing religious people are strikingly active in charitable work; they are even more likely to give and serve in nonreligious charities than secular people are (152).

Sadly, evangelicals are known more for power they seek than the provisions they give away.

Overall, Kidd’s work helps us see the ironies and conflicts that have led to evangelicalism as a “movement in crisis.” As he notes, today’s crisis has forerunners, and it will likely have future manifestations. The tensions and conflicts in evangelicalism go back to the beginning. They are not new.

Neither will they disappear with our generation. The question before us is whether or not this renewal movement can be renewed once again.

Kevin DeYoung
How to Improve Your Preaching
Book Briefs: February 2020
What Can We Learn from the #MeToo Moments in Genesis?
Jared C. Wilson
9 Biblical Reasons to Preach Christ from the Old Testament
7 Christian Podcasts I Listen To
Some Men Just Like the Fight
Justin Taylor
An Annotated Guide to Martin Luther King’s Letter from Birmingham Jail
The Three History and Biography Winners from the CT Book Awards
A Help for Apologists and the Rest of Us: Myths and Mistakes in New Testament Textual Criticism
Thabiti Anyabwile
A Burden Removed: A Biblical Path for Removing the Racism of Our Forefathers
Missions and Justice
Reparations Are Biblical
LOAD MORE
Loading