Earlier this week, I shared some surprising findings about the religious beliefs and practices of Americans in their 20s, based on research included in a new book, The Twenty-Something Soul by Tim Clydesdale and Kathleen Garces-Foley.

Today, I’m going back to their book to offer a few takeaways regarding the “Nones”—American 20-somethings who do not affiliate with a religious tradition. 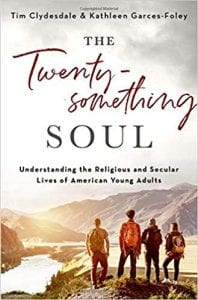 Right now, with 3 out of 10 20-somethings identifying as “evangelicals,” and 3 out of 10 identifying as Nones, you might think you’re looking at a mirror image of “devout” vs. “secular.” One of the findings seems to back up that assumption. Twenty-somethings who are “most assured about their convictions” are evangelicals and Nones, the more secular of which are “quite certain about their nonreligiousness” (32-33).

But is it true that devout Christians and solidly secular 20-somethings are roughly the same number, one group assured of their faith and the other assured of their secularism? Not quite. The picture is blurrier than that, in ways that church leaders would find positive and negative.

First, let’s look at where the Nones came from. Three out of 10 20-somethings today do not indicate a religious affiliation. Is that a massive increase? Does this signal a shift?

The authors do not see a massive decline in religious devotion among people in their 20s, as they’ve tracked this age group back more than four decades now. What they do see is a change in the affiliation of those who claimed a religious identity but didn’t prioritize religious practice.

“There is change occurring among young adults, but little of it is among the 1 in 4 American 20-somethings who have consistently prioritized religious commitment during the past half-century. The change is rather found among those whose affiliation with religion has been for the sake of familial tradition and the approval of fellow Americans, neither of which have remained strong during the last 50 years” (13).

The cultural pressures have shifted. As Tim Keller pointed out several years ago:

With the decline of cultural and familial expectations of religious identity and observance, there is less pressure to identify with a religious group, and in some areas of the country (the results often depend on the region) there may be more pressure to not identify as religious. Ed Stetzer summed it up this way when he said the “nominals are becoming the nones.”

So, yes, there is an increase in polarization: a steady level of evangelical 20-somethings matched by a growing number of unaffiliated 20-somethings.

Are All Nones Secular?

No. This is where the research gets blurry, but we need to pay attention if we’re going to really see what’s going on.

The authors of The Twenty-Something Soul point out some surprising findings regarding the 20-somethings who claim to be “unaffiliated.”

On the basis of their research, the authors conclude that between one-third and one-half of American Nones are “unaffiliated believers.” This runs the gamut from people who choose “None” because they belong to a non-denominational church to those who are culturally Christian by default even if, for whatever reason, they eschew the label. One-third to one-half!

Where does that leave the rest of the Nones? The authors believe “the ranks of the religiously unaffiliated are permeable and include philosophical secularists, indifferent secularists, spiritual eclectics, and yes, even those who believe in God” (17). But it’s only between one-sixth and one-fifth of American Nones who actually fit the category of “secularists” (145).

I hope the findings from this book will encourage and challenge church leaders regarding the mission opportunities before us. Contrary to the popular narrative, we are not seeing a mass exodus of 20-somethings from the church. The situation, especially for evangelicals, is much brighter than the doom-and-gloom statistics suggest. Furthermore, the rise of the Nones does not mean that more and more people are hostile to the church or to people of faith. Indifference and eclecticism in spirituality does not equal hostility.

On the other hand, many who belong to evangelical churches and denominations do not hold to orthodoxy in terms of there being a “personal God” or the moral vision of Christianity that would forbid, for example, cohabitation before marriage. The moralistic therapeutic deism of our day permeates all the categories of research, regardless of denominational label. What does this mean? We have our work cut out for us in calling people to embrace the authentic Christian faith in all its glory, rather than a weaker and diluted version that promises self-fulfillment and actualization.

Thabiti Anyabwile
A Burden Removed: A Biblical Path for Removing the Racism of Our Forefathers
Missions and Justice
Reparations Are Biblical
Ray Ortlund
You can sing Romans 8
Church Conflict 101
You can stand any test
Jared C. Wilson
3 Unchanging Truths for a ‘Post-Truth’ World
‘The Gospel According to Satan’ Releases Tomorrow
Submit to One Another
Scotty Smith
Treasuring Our Savior, Master, and Inheritance
Life Isn’t about Jesus Joining Our Team
Our Deep Calling and Longing for a River of Righteousness
LOAD MORE
Loading