When I was at CHBC, I had the joy of participating in membership interviews, often sitting in as other pastors conducted them and often conducting them myself. In the last couple of months there, it seemed the Lord had me conduct all the interviews with people who struggled with believer’s baptism. They were often people who had come from paedobaptist traditions and the idea of being “baptized again” (as they would put it) troubled them.

I didn’t know why the Lord had me involved in so many discussions of this sort. But now that I’m at FBC, a church like CHBC that attracts people from so many backgrounds, I can see His wisdom more clearly. And I am thankful for the earlier training. 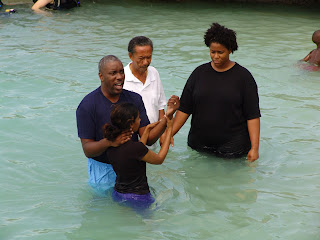 But here’s what I notice. Objections to the credobaptist position runs along two lines usually. Some people have theological convictions. They’re committed to a paedo perspective and are perhaps well-trained in that understanding. But, honestly, that’s a minority of people I see.

The majority of people have a different objection. They are troubled in heart about what being baptized as a believer implies about their parents, earlier church affiliation, and judgment that someone is in error. In other words, they don’t want to appear to be saying something critical, ungrateful, or uncharitable about their loved ones who raised them or churches they’re fond of. For the majority of people I see, that’s the heart of the matter.
In those cases, I’m convinced that people are helped if they can come to understand at least two things. First, the truth of Scripture should determine their feelings rather than having their feelings determine what they accept as true. We often determine what we accept as true by how this or that proposition makes us feel. If it feels difficult or disconcerting, we often reject it. If it “feels right” or acceptable, then we’re inclined to accept it. The Word of God must be the locomotive’s enine and our feelings the caboose. We must receive the Word of God with meekness (James 1:21), which must mean in part that we conform our feelings to the truth. That can be a slow process at times, but it is nonetheless necessary.
Second, people in this situation need to be helped to see that for many people in paedobaptist traditions the infant “baptism” is conducted with the hope of genuine saving faith to follow. They don’t believe the act saves the child, but look forward with the hope of future salvation. Baptism as a believing adult, in accordance with the pattern of Scripture, is in one sense the future hoped for in that earlier rite. It does imply, on the one hand, that the earlier exercise was not a baptism and that the church and family were in error. But on the other hand, the what such situations afford is the opportunity to identify with Christ in a self-conscious way, to celebrate the saving work of Christ as it’s proclaimed in baptism, to demonstrate conformity to the Word of God in baptism, and, certainly not least, to rejoice that what parents and family hoped for years ago in infant “baptism” is “fulfilled” when an adult child stands for and with Christ in conscious faith and baptism.
I don’t hold to infant “baptism,” obviously. But I don’t think the motive and hopes of parents who do should be impugned and disregarded. And I think a number of new members to our church have been helped by knowing that and celebrating that fact that their parents’ best hopes for them are fulfilled in a saving and personal knowledge of Christ, expressed in part by baptism. That lies close to the heart of the matter.