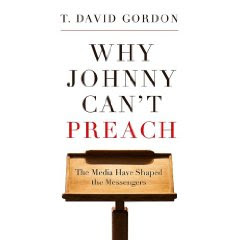 I’m always a sucker for a good jeremiad. So I couldn’t resist ordering T. David Gordon’s new book Why Johnny Can’t Preach: The Media Have Shaped the Messengers. Like every good book-long complaint there are parts here and there they I don’t agree with. But on the whole, I found Gordon’s butt-kicking to be well-deserved and well-stated. This is a very good book and I recommend it highly.

What makes the book compelling is Gordon’s passion for preaching. If you don’t know, Gordon is a professor at Grove City College (and formerly at Gordon-Conwell, though not when I was there). So his passion for preaching is not as a preacher, but as a listener. Also noteworthy is that Gordon wrote most of this book in 2004 while undergoing cancer treatments. At the time, Gordon didn’t know if he would live. This book was the last thing he wanted to say to the world if he only had one last thing to say. That’s how passionate he is about sounding the alarm on the woes of contemporary preaching. Thankfully, his cancer is in remission now. But he remains unapologetic in his critique.

The substance of Gordon’s complaint is pretty simple: the overwhelming majority of those ordained to Christian ministry cannot preach even a mediocre sermon. And lest we think he’s railing on some seeker-sensitive strawman, Gordon makes clear that he is speaking from his own experience running in conservative evangelical and conservative Reformed circles. This is not their problem, he argues, this is our problem. Sure, we may have some great preachers with large followings. But does the average Christian family in the average pew in the average church on the average Sunday get a decent sermon? Gordon thinks not.

Gordon gives several pieces of evidence for his negative conclusion.

1) Anecdotally, he estimates that only 15% of the sermons he’s heard in the past 25 years had a discernible point. And of those 15%, less than 10% had a point based on the text of Scripture.

2) Most churchgoers wants shorter sermons, not because they have short attention spans, but because their preacher, God bless him, can’t preach very well.

3) Gordon looks at Robert Dabney’s Lectures on Rhetoric from the 19th century and concludes that Dabney’s “seven cardinal requisites of preaching” are missing from most of our pulpits: textual fidelity, unity, evangelical tone (is the minister eager to bless the congregation or scold them?), instructiveness, movement, point, and order. These are not subjective measures, mind you. These are basic fundamentals. No one in the history of homiletics has encouraged disunity in the sermon. These are things we can all agree on. And yet, they aren’t there.

Why are these qualities missing? Gordon says it’s not mainly from laziness on the part of the preacher (though that can be part of it). It’s not the fault of our seminaries either. The two reasons Johnny can’t preach are because Johnny can’t read and Johnny can’t write.

We have been trained by a image-based, sound bite, attention span deficient culture to skim books and fly past arguments. In other words, we don’t read carefully. We don’t read literature. And we surely don’t read poetry. We aren’t used to thinking deliberately, meditatively about texts. So preachers come to the text each week with general ideas about what the Bible says and then once they find those same ideas again, they preach on the same thing again. We are not learning, growing, or being changed by the text. Preachers are simply coming to have their banal assumptions and cliche-level understanding confirmed for yet another week.

And preachers can’t write. We don’t write letters anymore. We talk on the cell. We IM. We write a quick note on somebody’s Facebook wall (about something really important, like the kind of oatmeal we just ate or our favorite Smurf). And when we write at all, it’s in an email, where we ignore punctuation and rely on emoticons to do the hard work of telling people how we feel.

All of this makes preachers and preaching disorganized, sloppy, and trivial.

Ministers [in our culture] are not at home with what is significant; ministers whose attention span is less than that of a four-year-old in the 1940s, who race around like the rest of us, constantly distracted by sounds and images of inconsequential trivialities, and out of touch with what is weighty. It is not surprising that their sermons, and the alleged worship that surrounds them, are often trifling, thoughtless, uninspiring, and mundane…The great seriousness of the reality of being human, the dreadful seriousness of the coming judgment of God, the sheer insignificance of the present in light of eternity–realities that once were the subtext of virtually every sermon–have now disappeared, and have been replaced by one triviality after another (58-59).

I told you it was a good book. Tomorrow I’ll finish my review and provide some more pain.

The Coronavirus Is a Result of the Fall

All Things from His Fatherly Hand

Sympathy Is Not the Point

How to Improve Your Preaching

Thomas Kidd
Edith Waldvogel Blumhofer (1950-2020)
The Christianization of Slavery
Why Are There So Few Christians in Academia?
Erik Raymond
Books That Introduce You to John Owen
Happy Fools on April Fool’s
How Can We Be the Body When Physically Separated?
Trevin Wax
Trevin’s Seven
New Research: Churches Going Digital, While Offerings Drop
Pray All the Psalms with Me the Next 30 Days
Jared C. Wilson
The Severe Mercy of a Stay-at-Home Order
Pastor, You Were Made for This
The Fear-Driven Life
LOAD MORE
Loading