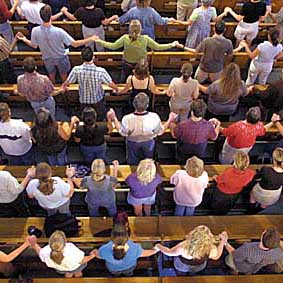 Several years ago–I can’t remember if it was three or four–we experimenting with turning one Sunday evening service a month into a prayer meeting. I’m happy to say the experience stuck and these monthly prayer services have become a highlight of our life together as a church.

Over the past couple years, and especially over the weekend after I tweeted something about our prayer service, I’ve had people ask me what we do at these prayer meetings and what they look like?

In general, the service is 60-75 minutes long. We usually start with a hymn and then have a brief (15 minute sermon). We haven’t always included the sermon–and there is a danger of the sermon eating up all the time for prayer–but we’ve found that a brief sermon gets the heart ready for prayer and is also helpful for non-Christians who may be visiting. The rest of the service is set aside for prayer, which is normally led by me, or sometimes by one of our other pastors. Rather than go into a blow by blow of this past week’s service, I thought it would be helpful to share some lessons we’ve learned about planning for and leading an effective prayer meeting.

1. Establish a regular and attractive time for the service. If you don’t currently have a prayer service, you will have a hard time starting one up at a new time. People are already overbooked. No matter how much you exhort people, it’s hard to get a good turnout for prayer on Friday night or some early morning. We have a 30 minute prayer meeting on Tuesday mornings which is faithfully attended by a few church members. It’s a great time for those of us who make it a priority. But it’s rarely more than 10 people. By putting our prayer service in a regular church slot–which for us was Sunday night, but could be Wednesday night or some other time–we not only made it possible for more people to attend, we sent a signal that this was important. To be fair, our Sunday evening attendance is not anywhere near our Sunday morning attendance, but I bet we had 125 people at our prayer service last night. That’s a lot better than nothing.

2. The pastor has to be involved. I lead most of our prayer services. Rarely does anyone besides one of our three pastors lead. That’s not because others are incapable of leading well. They are and some have. But we want people to see that this is not a throw away event. The pastor does not have to be the best prayer warrior in the church or the only champion for prayer, but I’m convinced he has to take ownership of the prayer meeting if it is to succeed.

4. Include children. This has been one of the unexpected delights of our prayer meeting. We have lots of children in our church and many in our worship services. They are full participants, often praying out loud when we huddle in small groups of 8-15.

5. Celebrate. We share a meal after our prayer services. Some churches may be too big for such fellowship, but most are not. Having pizza and ice cream together gets the kids excited and sets apart the evening as anticipated fellowship event as well as a time for prayer. Prayer is hard work, so put your best foot forward.

6. Be patient. Praying out loud is difficult for some people. Praying for 30-60 minutes can feel awkward at first. Keep at it. I think we’ve grown a lot in praying together as a church, but it takes practice.

7. Keep up the pace. Maybe in some churches and in some cultures God’s people can linger in prayer for hours on end, but in my experience in this country, we need to keep things moving. A half hour of prayer can seem daunting, until you break it up into 3 minutes of silent prayer, 4 minutes in led prayer, 5 minutes in read prayer, 8 minutes in large group prayer, 10 minutes in small groups praying through five separate items.

8. Plan, plan, plan. Can I say it again. Plan! The biggest human difference between a vibrant, effective prayer meeting and a dull, ineffective one is planning. I learned this from Ben Patterson, both from his teaching and from his example. Many churches gave up on the prayer meeting because no one knew how to plan one. Asking people to popcorn prayer for 30 minutes will not sustain most people’s interest.  People need categories for prayer. They need models for prayer. They need theological boundaries for prayer. The pastor must spend significant time preparing to lead his people in prayer.

9. Remember. Be expectant when you pray. And when God answers prayer, remember to thank him. I will never forget that it was soon after starting our monthly prayer service that God started opening the doors for us to buy our current church facility. I don’t think anyone who was at the service will forget the time of prayer we had for a college student with cancer and his newlywed. We’ve prayed for little babies and old saints. We’ve seen some people get better and some go to be with the Lord. Of course, every church prays for these sort of things, but we’ve been blessed to be able to pray for them together.

10. Don’t forget to pray. Taking prayer requests for 25 minutes and praying for 5 minutes is nice, but not really a prayer meeting. Having your calling pastor do a traditional service for old people may be a wonderful idea, but it’s not a prayer meeting either. And singing four hymns, preaching for 30 minutes, and then praying through the sick list for 10 minutes is not what we’re talking about. Make sure your prayer meeting is full of prayer.

Christianity Is About Saving Sinners

Life and Books and Everything: Who’s to Blame for the Atlanta Shootings‪?‬

Erik Raymond
Why Does Jesus Heal People?
A Tool for Reading the Bible Devotionally
A Second Adam to the Fight and to the Rescue Came
Thomas Kidd
Why American Church Membership Is Plummeting
Denominations: To Leave or Not to Leave?
The Bible and the Civil War: An Interview with James P. Byrd
Jared C. Wilson
Reflections on the 10th Anniversary of Gospel Wakefulness
The Mystery Unfolding, Grasping: A Maundy Thursday Reflection
Pastoral Ministry Means Death
Thabiti Anyabwile
A Burden Removed: A Biblical Path for Removing the Racism of Our Forefathers
Missions and Justice
Reparations Are Biblical
LOAD MORE
Loading