Popular and prolific Bible teacher Warren Wiersbe died on the evening of May 2, 2019, at the age of 89.

Warren Wendel Wiersbe was born on May 16, 1929, the third child of Fred and Gladys Anna (Forsberg) Wiersbe, in East Chicago, Indiana (25 miles southeast of Chicago). At that time, the steel town of East Chicago was the most industrialized city in the United States. His mother was of Swedish descent, and his father was of German descent. He was a lactose-intolerant milkman.

Wiersbe traced his conversion to May 1945 during high school sophomore. Just before his sixteenth birthday he attended a Youth for Christ rally and heard the ministry’s first full-time evangelist, 26-year-old Billy Graham. Though he was raised in the church and had attended Vacation Bible School, he trusted in Christ for the first time that night in response to Graham’s altar call.

A few years later, the president of Youth for Christ, Torrey Johnson, asked him what he wanted to do with his life. Wiersbe responded, “I wanted to go to school and get some Bible training and then preach the gospel.” Johnson responded: “Young man, find the one thing you do that God blesses, and stick with it! Around that time, Wiersbe later wrote, “I had developed an insatiable appetite for the Word of God, and I wanted to study and understand the Bible more than anything else in all the world.” He began acquiring and using his first books: the Scofield Reference Bible, Strong’s Concordance, Cruden’s Concordance, Smith’s Bible Dictionary, The Christian Worker’s Commentary by James M. Gray, Notes on the Pentateuch by C. H. MacIntosh, using tools from a dispensational perspective.

After attending Indiana University in Indianapolis for a year and then Roosevelt University in Chicago, Wiersbe enrolled at Northern Baptist Theological Seminary in Lombard, a northwest suburb of Chicago. He entered a five-year program that enabled him to get a college degree and seminary degree at the same time. As a seminary student, he was ordained in 1951 and began serving as pastor of Central Baptist Church, a blue-collar, 150-member neighborhood church in East Chicago. In June of 1953, he received his bachelor of divinity degree from Northern and married Betty Warren, whom he had met at Northern. (She was a librarian, and he practically lived in the library.) Together they had four children—two boys (David and Robert) and two girls (Carolyn and Judy). He once said of marriage: “Getting a wife is something like being saved. You make a decision and then you discover you’ve been chosen. And this is what happened. We just knew we were made for each other.”

In 1957, he left his pastorate at Central to become Director of the Literature Division for Youth for Christ International.

From 1961 to 1971 he pastored Calvary Baptist Church of Covington, Kentucky, just across the river from Cincinnati, Ohio. A local Cincinnati radio stations broadcast his Sunday sermons as the “Calvary Hour.” His Sunday During his tenure the church grew from a capacity of 800 people to one that could hold 2,000 worshipers.

In 1971 he received a call from the famed Moody Memorial Church in Chicago, succeeding George Sweeting, who became the president of Moody Bible Institute. Wiersbe’s sermons were featured on Moody’s “Songs in the Night” national radio program. Wiersbe served at Moody from 1971 to 1978, during which time he wrote for Moody Monthly, penning the “Insight for the Pastor” column, where he offered not only practical theology counsel but also wrote biographical sketches of noted figures in church history, which formed the basis for his books Listening to the Giants (1976) and Walking with the Giants (1980). Each of the entries included bibliographic information for further reading—a feature that encouraged and guided many pastors to explore primary sources for themselves. Phil Johnson, Executive Director of Grace to You, writes: “The backbone of my library today consists of books he introduced me to. He sparked my interest in Lloyd-Jones, the Puritans, and preaching—among other things.”

During his time in Chicago, Wiersbe also served as board chairman for the Slavic Gospel Association.

The staff at Moody Church quickly discovered Wiersbe’s sense of humor. He recalled:

God has a sense of humor. If you don’t believe that, go to the shopping mall, sit there and look at the people. It will convince you that God has a sense of humor. Humor is based on contradiction, seeing the other side of a situation. In one of the churches I pastored, we would have our staff meeting on Monday morning. We’d spend the first twenty minutes laughing over what happened the day before. Because people are people and situations are situations. I remember the Sunday morning at Moody Church when John the Baptist came in. This guy came in wearing a white robe and carrying a big pole and he said he was John the Baptist. We knew he was a fraud because he had a head.

Beginning in 1978, Wiersbe began teaching practical theology classes at Trinity Evangelical Divinity School and authored materials for a DMin course on “Imagination and the Quest for Biblical Preaching,” used at both Trinity and also Dallas.

In 1980 the Wiersbes moved to Lincoln, Nebraska, where he became Bible teacher at Back to the Bible Radio Ministries. In the course of the move, Mrs. Wiersbe told the real estate agent, “We are looking for a library with a house attached.” Their house would eventually have the entire basement devoted to Warren’s collection of more than 10,000 books. During that time he wrote a bi-weekly column for Christianity Today. From 1984 to 1990 he served as general director of Back to the Bible.

In 1995, Wiersbe became writer in residence at Cornerstone University in Grand Rapids, Michigan, and was appointed distinguished professor of preaching at Grand Rapids Theological Seminary.

In 1997, he wrote an autobiography entitled Be Myself: The Autobiography of a Bridge Builder. (His grandson Don Jacobsen explains the bridge-building metaphor here.)

Throughout his career, Wiersbe authored more than 150 books. His most famous series was the BE series of expositional commentaries, which covered the the entire New Testament and most of the Old Testament, from Genesis [Be Basic (Genesis 1–11); Be Authentic (Genesis 12–50) to Revelation (Be Victorious). 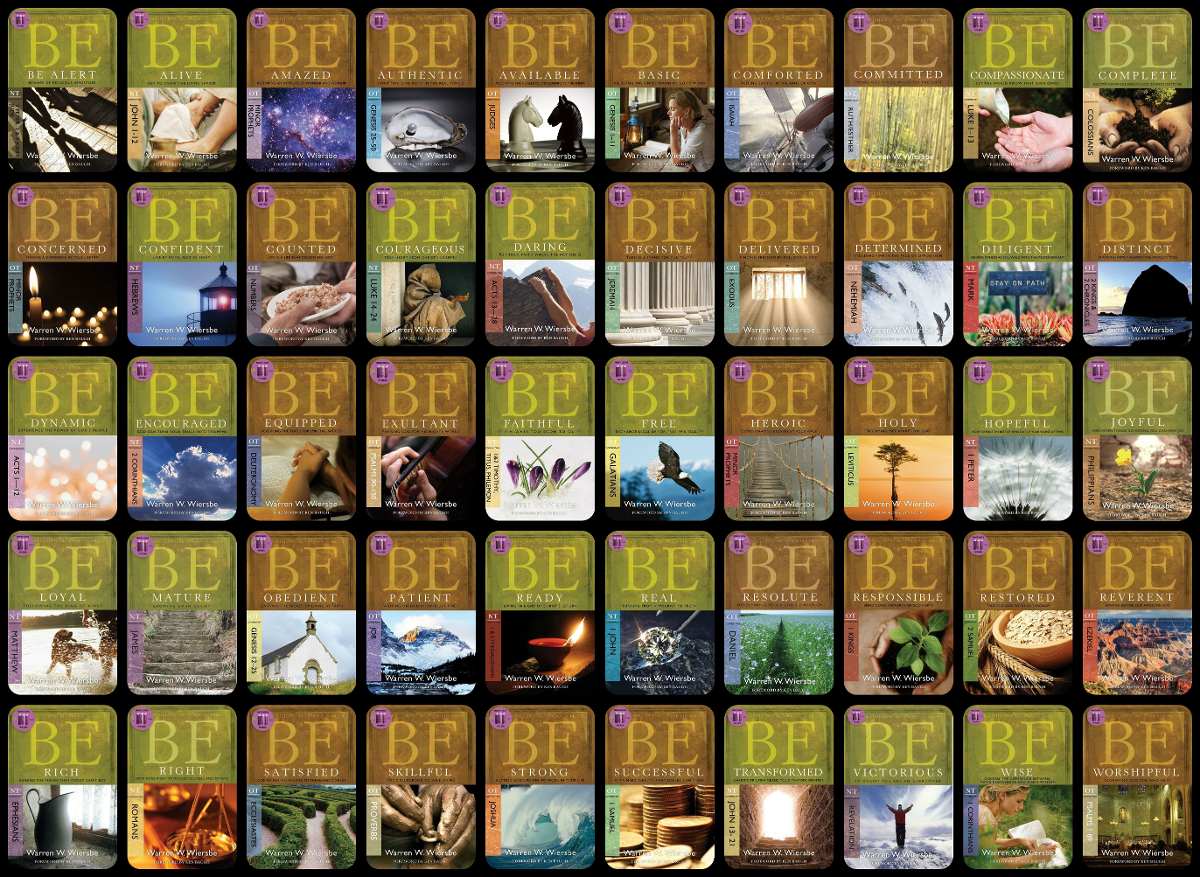 In an interview late in life, he reflected on his lack of physical strength growing up and how the Lord was preparing him for something different.

My early childhood was one of difficulty. Not because of my family, although being the baby of the family is not easy. Both of my brothers were very athletic, very mechanical, my father was quite mechanical and I was that 65 pound weakling that Charles Atlas used to talk about in his advertising. So I spent my early days in the library. Not the baseball field but the library. But apparently this was God’s plan because I learned to read, to enjoy reading and grew up some what of an introvert, some what of a recluse and yet God had His plan.

In another interview, he said:

Writing to me is a ministry. I’m not an athlete, I’m not a mechanic. I can’t do so many of the things that successful men can do. But I can read and study and think and teach. This is a beautiful, wonderful gift from God. All I’m doing is using what he’s given to me to teach people, and to give glory to the Lord Jesus Christ.

When you learn the joy and the privilege of Bible study, you don’t have to be paid to do it. You don’t have to be pushed at doing it, and scolded. No, no, no. It’s a privilege. It’s a marvelous, glorious privilege. You may not see it, you may not know it. But others will know that you’re walking in the light. Blessed is the man that God blesses from the Word, because that is going to last forever.

Thomas Kidd
Tradition, the Bible, and America’s Debate over Slavery
Charles Spurgeon the Pastor
From ‘Wretched’ to ‘Needy’: Changing a Classic Hymn
Erik Raymond
Do Affections Provide Assurance?
A New Resource on an Old Confession
Why Our Church Cancelled Christmas Eve Service
Ray Ortlund
Everything just so
The blessing we dread
The peace of Christ
Kevin DeYoung
A New (Old) Blog
Life and Books and Everything: American History and the Historian’s Task with Wilfred McClay
Life and Books and Everything: What’s Going Right in the Church?
LOAD MORE
Loading