In 2006, Professor Randall Balmer claimed to reveal a dirty little secret about the origins of the “religious right.”

“They’ll tell you it was abortion,” blared a headline at Politico in 2014. “Sorry, the historical record’s clear: it was segregation.”

The “segregation” story spread all over. Balmer’s book, Thy Kingdom Come: How the Religious Right Distorts the Faith and Threatens America—An Evangelical’s Lament (2006), spawned articles In Politico, Slate, and London’s Guardian. It was taught in Ivy League schools.

Balmer released a second book on the story in 2021, Bad Faith: Race and the Rise of the Religious Right.

And with the recent fall of Roe v. Wade, the story has been passed around again.

But the story is wrong.

In reality, the triggering event wasn’t “Evangelicals supporting segregation.” Rather, it was anti-discrimination Evangelicals outraged by an IRS plan to presume all church schools were segregationist. Balmer’s “just so” story distorts the record and caricatures Evangelicals, assigning them almost the antithesis of their actual positions. 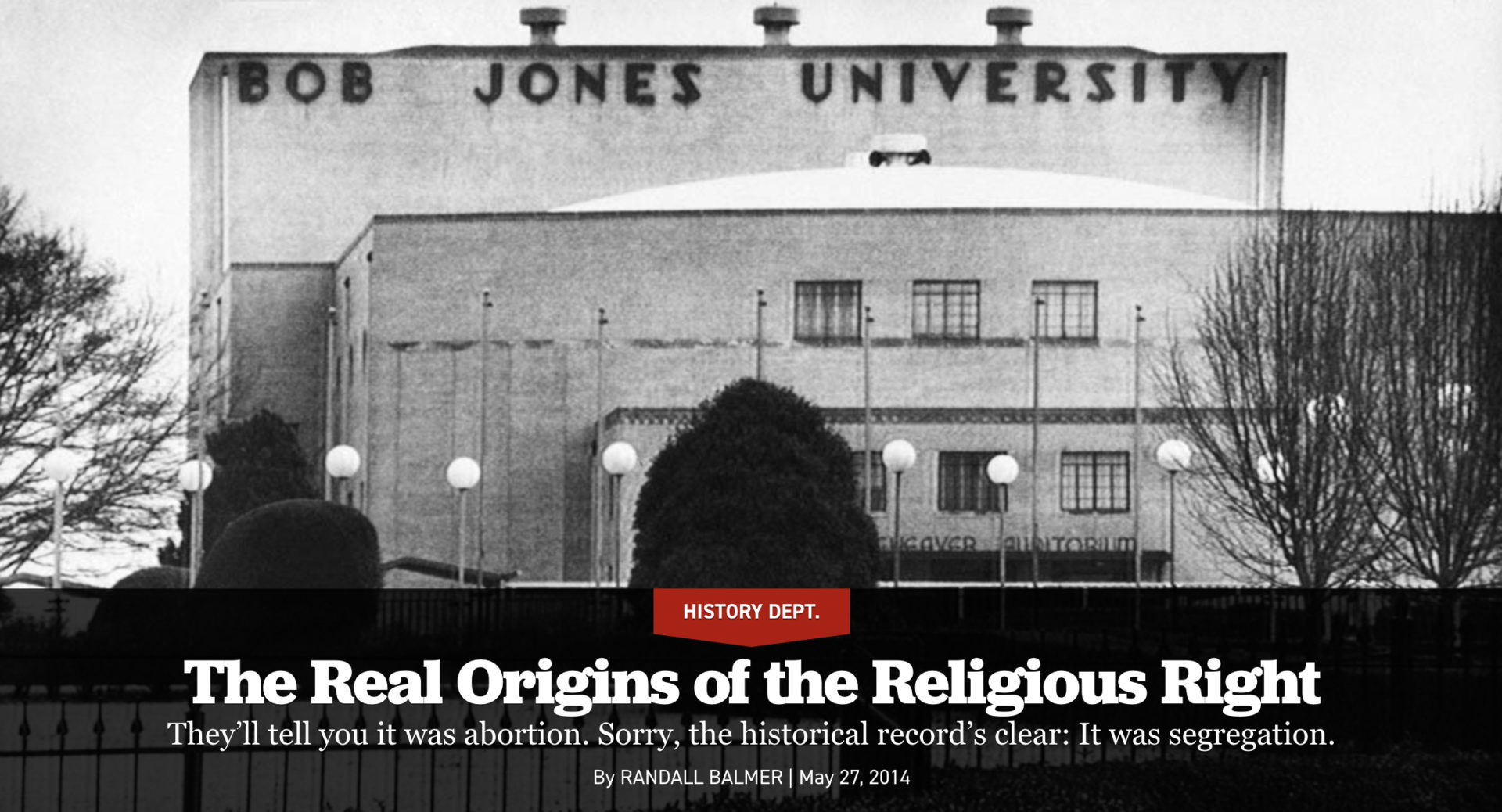 In his 2006 book, Balmer claimed he had received a bombshell confession from Paul Weyrich (1942–2008), a key activist in the Religious Right.

Balmer said that he was invited to a “closed-door” conference in 1990:

In the course of one of the sessions, Weyrich tried to make a point to his Religious Right brethren. . . . Let’s remember, he said animatedly, that the Religious Right did not come together in response to the Roe decision. No, Weyrich insisted, what got us going as a political movement was the attempt on the part of the Internal Revenue Service (IRS) to rescind the tax-exempt status of Bob Jones University because of its racially discriminatory policies.

During the following break in the conference proceedings, I cornered Weyrich to make sure I had heard him correctly. He was adamant that, yes, the 1975 action by the IRS against Bob Jones University was responsible for the genesis of the Religious Right in the late 1970s.

Note the lack of quotation marks. This story shifts in later retellings, but the core is never recanted. By 2021, Balmer says Weyrich “sounded credible,” and it “set [him] on a course” to prove the claim.

But the Weyrich story didn’t happen this way. 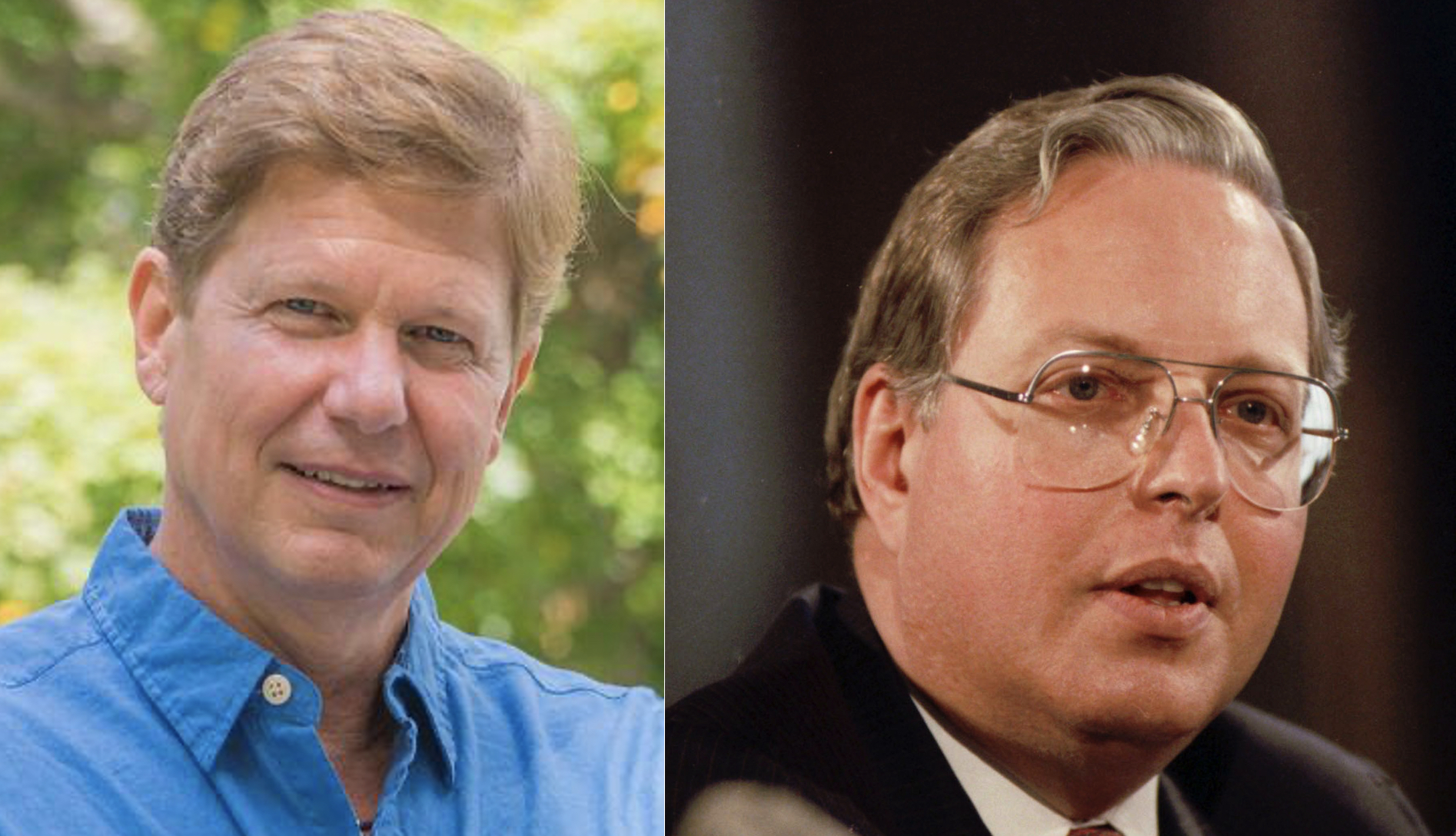 Weyrich did not offhandedly claim “what got us going as a political movement was the attempt on the part of the Internal Revenue Service (IRS) to rescind the tax-exempt status of Bob Jones University.”

Nor did any 1975 IRS action against BJU “galvanize [evangelicals] as a political force and [bring them] into the fold of the Republican Party,” as Balmer’s latest book claims.

Weyrich is dead. So we can’t ask him. But we can know what he said. Contrary to the impression Balmer gives, the conference wasn’t a secret. The Ethics and Public Policy Center invited religious historians to present papers, and religious right luminaries responded. The papers and responses were even compiled into a book: No Longer Exiles: The Religious New Right in American Politics (1992).

In the proceedings, Weyrich did comment on the movement’s genesis. But he didn’t mention segregation.

It is a defensive movement. The people who are involved in [the Religious Right] didn’t want to get involved. . . . [W]hat caused the movement to surface was the federal government’s moves against Christian schools. . . . [I]t wasn’t the abortion issue; that wasn’t sufficient. It was the recognition that isolation simply would no longer work.

What federal “moves against Christian schools” did Weyrich have in mind?

Balmer says Weyrich was “adamant” that it was a 1975 action by the IRS against Bob Jones University. He also mentions Green v. Connally, a case first decided in 1971. But neither of these fit the facts.

To begin with, the IRS was the defendant in both court cases. In Green, Mississippi parents forced the IRS to withdraw tax exemptions from explicitly segregated schools. BJU, seeing the writing on the wall, immediately sued the IRS after Green.

All of which would have been obvious in 1975. The premise of BJU’s first suit was that the revocation was a foregone conclusion, unless a court took the decision away from the IRS. And BJU’s supporters had reasons to think a court would stop the IRS. Indeed, BJU won at the trial court level in 1979. The win wasn’t reversed until the very end of 1980 (and later confirmed by SCOTUS in 1983), well after the “religious right” phenomenon had started.

The other dates posited by Balmer are too early. The religious right surfaced in the 1978 midterm elections. But if religious voters were “galvanized” by an IRS action somewhere between 1971 (when Green was decided) and 1975 (the date Balmer says Weyrich gave to him), why would they stay hidden until the Carter midterms?

A clue that Balmer got the real trigger wrong comes from Grover Norquist, another activist colleague of Weyrich. Norquist made a claim to US News & World Report that is similar to what Weyrich said:

The religious right did not get started in . . . ’73 with Roe v. Wade. It started in ’77 or ’78 with the Carter administration’s attack on Christian schools. 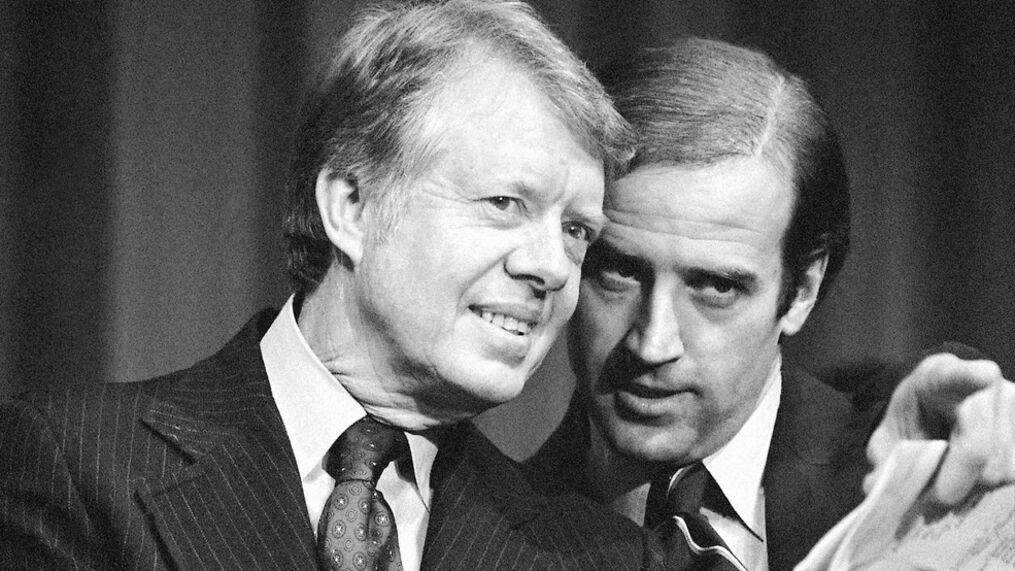 What Really Started the Firestorm in 1978

In 1978, the IRS proposed new rules for private elementary and secondary schools with tax exempt status under IRC 501(c)(3). The proposals did not apply to colleges like BJU. Schools “adjudicated” to engage in race discrimination would lose tax exemption, as required by Green.

But the IRS also proposed rules for private schools lacking “significant” minority enrollment or “relat[ing]” to desegregation efforts in public schools. From then on, the IRS would presume, in effect, that such schools were racist and segregationist. In order to obtain or retain tax exempt status, these schools would have to adopt affirmative action plans and meet ratios dictated by the IRS.

It was this presumption of race discrimination that galvanized many Evangelical voters in the November 1978 mid-terms.

Most were not defending segregation; many were outraged that even churches opposed to discrimination would be lumped in with the segregationists.

Green was a landmark, so in some sense, it was a progenitor of all the IRS’s actions in this area, including the 1978 proposals.

But Green’s holding did not trigger Evangelicals or catalyze the Religious Right. The Association of Christian Schools International told Congress: “we take no issue with [sic] IRS in its attempt to remove the tax-exempt status of [segregationist] schools.”

Instead, it was the IRS’s presumption against Christian schools that ignited a firestorm in 1978.

In part, because many church schools were inseparable from their churches. A challenge to the school’s exemption would effectively challenge the church’s exemption, too.

And church schools typically draw fellow believers, not a random pool of nearby students. Many religious groups have strong ethnic connections, for reasons of history and doctrine. The students in a Greek Orthodox school, an Amish school, or a Jewish day school are likely to be “white,” no matter how much the school opposes discrimination.

Noted constitutional attorney William Ball, who later argued at the Supreme Court for BJU, said the IRS had tried unfairly to put religious minorities in a “suspect class.” Even the Baptist Joint Committee on Public Affairs, representing Carter’s own Southern Baptist Convention, opposed the 1978 plan, in part because it intruded on church autonomy.

So the core allegations of the Balmer story are wrong. The trigger for Religious Right voters was not:

The timing of the IRS proposals undercuts another part of this narrative: Balmer’s specific claims about an “abortion myth.”

It’s clear that Roe didn’t immediately produce partisan voters. Balmer’s explanation is that Weyrich “seize[d]” a 1975 “opening” around BJU to engage in “machinations,” where he cleverly redirected evangelical segregationists to support the pro-life movement by 1978.

But Weyrich and Norquist were talking about events barely months apart. The IRS rules were announced in August 1978. In November 1978, the “religious right” had already embraced the life issue, and voters in Iowa pushed out U.S. Senator Dick Clark over his stance on abortion.

So there was no multi-year subterfuge by a conservative Svengali. No doubt, Weyrich wanted issues that could generate conservative votes. But the pro-life movement’s connection to the Religious Right wasn’t Weyrich’s cynical invention; anti-Roe organizing was one of several streams of activism that reached critical mass in the Carter years.

History Is More Complex than Simplistic

Of course, some may say it’s all close enough. Some scholars, like Anthea Butler, have chosen to foreground a particular story, alleging that an evangelical, “color-blind gospel” merely provided cover for followers of Billy Graham to “whitewash” the intentional segregation. The racial neutrality of Evangelical schools, in this story, is another form of racism.

And no honest person would deny the reality of some segregation academies, or that many church schools were largely white. Like all American phenomena, the question will always be how Evangelicals and Christian schools interfaced with race, not whether it interfaced with race.

But race is only part of the story. Public schools of the 1960s and 1970s made other changes, too. Most public schools were, in practice, Protestant until Engle v. Vitale in 1962 and Abington v. Schempp in 1963. Those cases held that compulsory prayer and Bible reading in public schools violated the First Amendment. One of the parents in Abington, Madalyn Murray O’Hair, was named “The Most Hated Woman in America” by Life magazine in 1964.

So parents faced a new dichotomy between “religious” and “public” education. Fears about secular humanism and atheism in public schools caused Christian schools to open rapidly in the early 1970s in California, the western states, and the Midwest, not just the South.

That’s not to suggest that the rural Midwest of the 1970s was beyond race issues. But those parents weren’t forming redoubts against local desegregation orders. There were other reasons for exiting public schools.

Telling the story carefully, then, is important. Balmer’s “segregation” story has spread so widely, it has poisoned the well in many discussions of Evangelicals and their educational institutions. Rather than describe Evangelicals as Americans with concerns about life, government overreach, and religious freedom, Balmer paints the Evangelicals as vile racists who are dishonest about their own motivations.

But the actual story of the “religious right” is far more complex. By the early 1970s, Evangelicals, Catholics, and other religious voters had discovered that politics would not leave them alone. Then their concerns about abortion, government overreach in schools, secular humanism at the FCC, and an unresponsive “born again” President all merged into a single outlet, creating a torrent of Republican voters in 1978 and beyond.

Several issues can lay rightful claim to being the headwaters of the Religious Right. But it wasn’t the IRS’s attempt to revoke Bob Jones’ tax exemption, or defense of segregation.

Rather (as Evangelicals said at the time) when it came to segregation, it was Bob Jones versus everybody.

Jonathan Whitehead is an attorney in the Kansas City area. He regularly represents clients in religious liberty litigation, including cases before the Supreme Court of the United States. He is a 2004 graduate of Harvard Law School and a 2001 graduate of Southwest Baptist University.