This excerpt is taken from Nancy Guthrie’s new Bible study, The Word of the Lord: Seeing Jesus in the Prophets (Crossway, 2014).

If someone asked you, you could probably give a one or two-sentence summary of what books such as Charlotte’s Web or The Scarlet Letter or The Adventures of Huckleberry Finn are about. 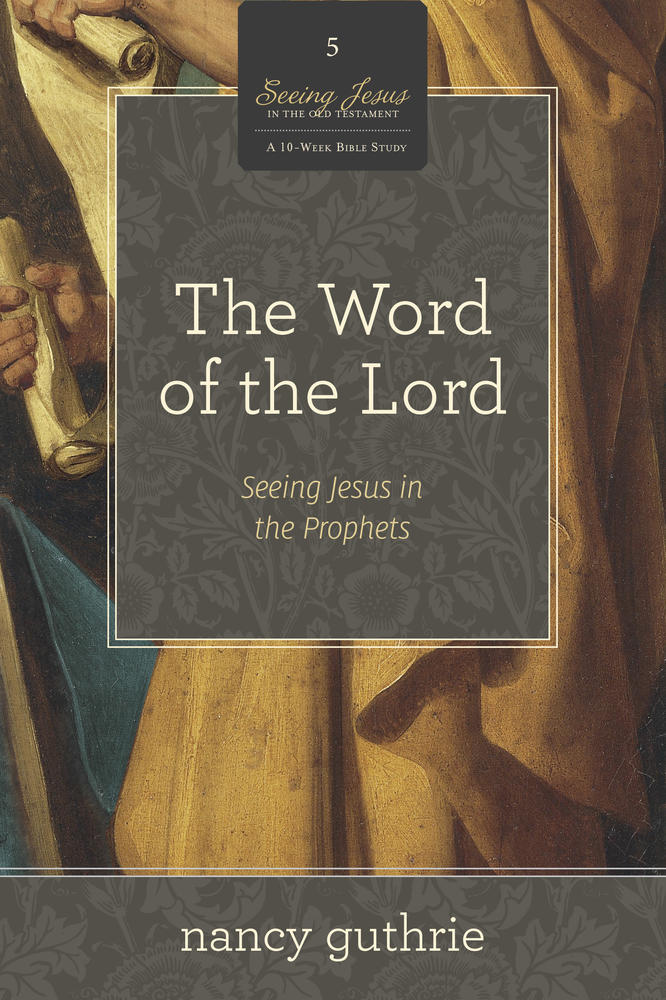 Why We Avoid the Prophets

First, we need to read the prophetic books because we struggle with the same sins the people in their day struggled with: If you or I were reading something that mentioned the Depression or 9/11 or the Rockies or the Big Apple, we would have no trouble understanding these references because they entail familiar history and geography. But when we read that Isaiah sees a warrior coming from Edom in crimson garments, we don’t get what this means because we don’t know that Edom represents the enemies of God and his people throughout the Old Testament. When Amos talks about the “cows of Bashan” (Amos 4:1), we don’t laugh out loud like we should because we don’t immediately get that Amos is referring to rich, lazy women who don’t care about the poor.

A second reason we struggle to understand the prophetic books is that we’re easily bored or confused by their repetitive oracles. Some of these books tell us a story—such as Jonah and Daniel. But much of the content in the prophetic books is made up of oracles with no sense of chronological order. Some of the oracles are like sermons or extended poems. Others are in the form of a dialogue between the prophet and God, or a description of a visionary experience given to the prophet by God. It can be difficult to know where one oracle ends and another begins.

A third thing that makes the prophetic books challenging is that we have a misunderstanding about what prophecy is. We tend to think of a prophet as someone who predicts the future, much like a fortune-teller or psychic. And while it is true that there was an element of prediction in the Old Testament prophets’ job as they spoke of coming judgment, exile, and future restoration, their predictions were intended as incentives toward repentance and obedience.

So if the prophets are so difficult to understand, what makes them worth our effort?

Why We Need the Prophets

First, we struggle with the same sins: idolatry, disregard for God’s law, empty religiosity, being in love with the world, hard-heartedness, greed, lack of concern for the poor, and presumption as members of the covenant community.

Second, we’re subject to the same judgment. God’s judgment on his people in the time of the prophets meant they lost their inheritance in the land, were exiled from the rest he provided, and had his presence withdrawn from their midst. And we’re subject to that same judgment. No one who claims to be part of the people of God yet lives in ongoing, unrepentant rebellion against the commands of God can anticipate inheriting all God has promised or enjoying the rest he provides. Instead, he or she can anticipate an eternity away from his presence.

While we struggle with the same sins and are subject to the same judgment, we also share the same hope—hope for restoration, renewal, and rest. We await the same Savior through whom all of these hopes become reality. As the people of the prophets’ day looked into the future, placing all their hopes on the Christ who would come, and were saved, so we look back, placing our hopes on the Christ who came, and are saved.

Where Things End in the Prophets

The Old Testament is an unfinished book. It ends with needs that haven’t been met, problems that haven’t been solved, tensions that haven’t been resolved. When we come to the end of the history recorded in the Old Testament, a small group of Israelites has returned to Jerusalem and gone to work rebuilding the city. But their capital city is not the powerful fortress it once was. They have no king on the throne like they once had in David and Solomon. They’ve rebuilt the temple, but it’s certainly not as magnificent as the temple once was; it comes nowhere near the descriptions of the glorious temple the prophets said would one day be in Jerusalem. God’s covenant people are living in the land given to them by God, but they simply cannot keep up their part of the covenant commitment. When they do have a heart to obey, it just doesn’t last.

But they have this word from God through the prophets that promises a greater redemption than their forefathers experienced from Egypt, greater than they experienced coming home from Babylon. They have the promises of a great city, a land of abundance to live in, a glorious temple in which God dwells, and a righteous king on the throne. So how could they reconcile the limited nature of their redemption, their city, their temple, and their covenant and king with the glorious promises made through the prophets?

Jesus does that. Jesus accomplished a far greater redemption than just returning one people group to a run-down land. His gospel is going out as his word is preached so that he is redeeming people from every tribe and tongue to make one holy nation that will live forever with him in a glorious land. Jesus is the great king who rules over his people in perfect justice and righteousness. Jesus himself is the temple where God’s people commune with God. Jesus is the better mediator of a better covenant, not only because he has written his law on our hearts by the Spirit, but also because he has taken upon himself the covenant curse for our disobedience. Jesus meets the needs, solves the problems, and resolves the tensions left unanswered, unsolved, and unresolved throughout the Old Testament.

Over and over again in the prophets we read that “the word of the Lord came to” his prophet. And when we read these words, we recognize the voice of this Word, the Word who was with God, the Word who was God, the Word that became flesh and dwelt among us, the only Son from the Father, full of grace and truth (John 1:1, 14). Christ was speaking not only to the prophet and not only to the people in the prophet’s day, but also to us, revealing himself to us in new ways, calling us to himself in fresh and perhaps costly ways, and promising himself to us in saving ways.

Nancy Guthrie teaches the Bible at her home church, Cornerstone Presbyterian Church in Franklin, Tennessee, as well as at conferences around the country and internationally, including her Biblical Theology Workshops for Women. She is the author of numerous books including her most recent book, Even Better Than Eden: Nine Ways the Bible’s Story Changes Everything About Your Story, and is the host of the Help Me Teach the Bible podcast at The Gospel Coalition. She offers companionship and biblical insight to the grieving through Respite Retreats that she and her husband, David, host for couples who have faced the death of child, and through the GriefShare video series.

2 We Need to Be Uncomfortable

3 If the President Tells You to Shoot Looters, You Have a Duty to Disobey

4 The FAQs: What Christians Should Know About Antifa

5 Untamed: The Gospel of Glennon Doyle