Wayne Grudem is distinguished research professor of theology and biblical studies at Phoenix Seminary in Phoenix, Arizona. The author of more than 25 books, he is the author of Systematic Theology, releasing later this year in a new edition for the first time.

What led you to write Systematic Theology?

When I first started teaching introductory theology to undergraduates at Bethel College in St. Paul, Minnesota, in 1977, I needed to find a useful textbook. I selected Louis Berkhof’s Systematic Theology (1939, 1941), which was probably the best one available at that time. Though he’s a model of a scholarship, Berkhof would give a statement and then pepper the paragraph with a lot of Bible verse references, but he wouldn’t often quote any of the verses. Without the actual words of the verses, I found that students didn’t know what those verses said or meant and that they also wouldn’t look them up.

So I thought it would be good to have a book that was understandable for entry-level students and that actually quoted the words of the Bible. In the editing process, one of the editors asked me if we could cut out some of the Bible verse quotations. I said, “No, I want those in there, because it’s the Word of God that changes people’s hearts.”

Another distinctive was that Berkhof’s book, as good at biblical interpretation as it is, had almost zero application to life. Think of the intensely theological books in the New Testament—Romans, Ephesians, and Hebrews, for example —there’s a lot of application to life in those books. I thought, if the authors of the Bible included application to life with their theological teaching, then shouldn’t we do the same? So the book has an emphasis in each chapter on practical application to daily life. I’m thankful to God that people have frequently said to me, “This book helped my spiritual life. It helped my relationship with God.”

Who did you have in mind when you were writing Systematic Theology? Who was your intended reader?

The primary audience was first-year seminary students—students who don’t have any background in theological terminology or in studying theology. But I also imagined that my parents were in the back of the classroom. My dad went to two years of college, and my mom wasn’t able to attend. They were Christians and read their Bibles throughout their lives, and I wanted them to be able to understand it too.

I love to hear that churches use Systematic Theology for leadership training. I just heard today about a pastor of a large church who uses it to train new elders. Another church had 800 people work through it one chapter at a time. When I see Christian laypeople, not just pastors or academics, reading the book and finding help for their Christian lives, I’m grateful to the Lord for that blessing. 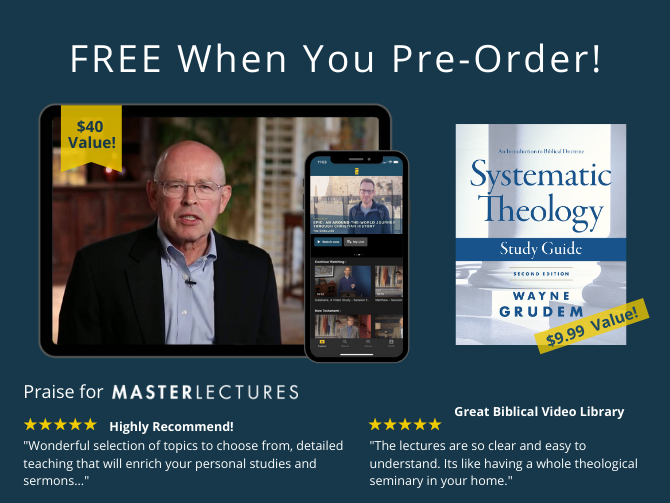 What is new or different in the second edition of Systematic Theology?

I’m excited about the new edition—it’s been 26 years since the first edition was published. I’ve been teaching through this book for the last 26 years, and every year students bring up new insights, objections, or questions. Over time, many of those queries were incorporated into lecture notes and found their way into this revised edition.

The revised edition is more than 200 pages longer than the first edition, and most of the 57 chapters have been revised and/or expanded. Some of the changes include updated, fuller analyses of recent debates such as those involving the Trinity and miraculous gifts of the Holy Spirit, as well as new, thoughtful critiques of open theism, the “new perspective on Paul,” Molinism (or “middle knowledge”), and “Free Grace” theology. There are new sections on Mormonism, Roman Catholicism, and Protestant liberalism. Readers will also get completely revised and stronger discussions on the clarity of Scripture, creation and evolution, the atonement, and biblical inerrancy; new and updated bibliographies, Scripture quotations (now ESV), and contemporary worship songs (added for the first time); and much more.

It’s also exciting to see new formats emerge. For the first time ever, Systematic Theology will now be available as an audiobook, wherever you buy or listen to audiobooks, including on Audible. I’m told it will be nearly 71 hours long! It will also be available from Logos Bible Software and elsewhere immediately at launch.

One other interesting development: there is a new study guide to go with the book. It’s quite robust (176 pages) and only available (for free) when you pre-order the book. Anyone who pre-orders the book also gets two months of free access to MasterLectures ($40 value). See all of the pre-order info.

On a personal note, you announced five years ago that you had been diagnosed with Parkinson’s disease. How are you doing?

I’m thankful to God that the progression of the Parkinson’s disease has been slow—uncommonly slow according to my doctor. The most noticeable symptoms that I have to deal with include a slight tremor in my left hand, more difficulty in making my handwriting legible, and the need to concentrate on distinctly articulating words when I speak. But I consider those minor inconveniences, not major disabilities.

For a while I was declining all out-of-state speaking invitations, but now I am accepting a few. I’m still teaching half-time at Phoenix Seminary. I’m on a moderate dose of the latest medications. I don’t know what the Lord has in store for me in the future, but I know that many people have told me they’re praying for me, and I’m grateful for that.

Last, why do you think people don’t study theology more often? Do you think this new edition might help change that?

Sometimes people think theology is boring or hard to understand or that it doesn’t affect their lives. A deeper understanding of theology shouldn’t be something to be intimidated by, and it certainly shouldn’t be boring.

I encourage readers of the new edition to read it as if the 57 chapters were individual short books. If they want to know more about prayer, read the chapter on prayer. If they just want to read the chapter on the Trinity, then read that. If they want to learn more about sanctification, read that chapter. I think they’ll find that it’s not hard or boring and has real and tangible applications to life.

Wayne Grudem is research professor of theology and biblical studies at Phoenix Seminary in Phoenix, Arizona. He taught at Trinity Evangelical Divinity School for 20 years. He has also served as the president of the Council on Biblical Manhood and Womanhood and president of the Evangelical Theological Society. He is the author of more than 100 academic articles and more than a dozen books, including the bestselling Systematic Theology. His new Systematic Theology online course just opened for enrollment.