When it comes to the most important things in life, where does church government or “polity” land on your list? Not high, I suspect. Evangelical Christians are known for many things; careful ecclesiology isn’t one of them.

I professed Christ for years before bothering to submit to a church.

“Ours is an anti-polity age, perhaps more than any other time in the history of the church,” Jonathan Leeman observes in Baptist Foundations: Church Government for an Anti-Institutional Age (B&H Academic). “Yet polity remains as important now as it was in the New Testament.” Edited by Leeman and Mark Dever, this new volume brings together 11 contributors to mount an exegetical and theological case for elder-led, deacon-served, congregational church governance.

I spoke with Leeman, editorial director of 9Marks and author of several books—including The Church and the Surprising Offense of God’s Love (Crossway, 2010); Reverberation (Moody, 2011); Church Membership (Crossway, 2012) [interview]; Church Discipline (Crossway, 2012); and Don’t Fire Your Church Members (B&H, forthcoming)—about why authoritarianism is uniquely evil, Christian “freeloaders,” the problem with “belonging before believing,” and more.

When we abuse authority, we lie perniciously about the one in whose image we are made. Think of what God does with his authority. First, he creates a world and crowns humanity with glory and honor, placing all things under his people’s feet. Then, when humanity rebels, he grants all authority to his Son, placing all things under the Son’s feet, so that the Son might redeem the world and share his authority once more with these rebellious-but-now-forgiven people. In creation and redemption, in other words, God uses his authority to create, to bless, to build up, to author life, to give away authority.

God is the ultimate delegator. When God’s authority shows up in the Bible, you find gardens flourishing, trees clapping their hands, lions lying down with lambs, mountains dripping with honey, and people rejoicing. Why then is our abuse of authority so heinous? Because when we abuse authority we lie about this God. We make him out to be the abuser, the exploiter, the oppressor, the liar, the destroyer. And in so doing we rob people of the life God has given them and tempt them to hate the one who loves them. 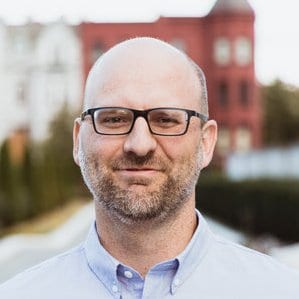 You insist Christianity must be “congregationally shaped,” but what if I’ve found solid Christian community outside of a local church?

I’d say you’re a freeloader! You live in a world in which local churches still do the hard and biblical work of identifying people as Christians through baptism and the Lord’s Supper and then nourishing them through congregational and elder oversight. And then you’re taking all of this good fruit and nourishing your “fellowship” with it.

Without churches, in other words, how would you know your Christian fellowship is actually “Christian”? Imagine a world with no local churches. How would there be any accountability for who is and is not a Christian? Who would separate right teaching from wrong teaching, or call out the hypocrites and heretics? I’m not denying that some confusion already exists in these matters, but take away churches and you would have complete gospel chaos—every man defining Jesus as seems right in his own eyes. Fellowship outside of a local church can be sweet, but it lacks the accountability structures that God intends to help that fellowship grow and remain faithful.

An underlying assumption of the “I don’t need a church” viewpoint is that all external authority is bad and that I will do best in the faith if governed entirely by myself. And I guess my question is, do I really need to explain how unChristian and anti-gospel this perspective is?

“Polity is inevitable,” you observe. “The only question is whether one’s polity is coherent, orderly, and, most of all, biblical.” I get the coherent and orderly stuff, but biblical? Where does the Bible mandate or model a particular form of church government?

You ask that question like one who belongs to the Greek tradition of political thought, which you would as a democratic Westerner! Going back to at least Plato and Aristotle, the Greek tradition has been particularly interested in large, abstract structures or forms of government. Both Plato and Aristotle, for instance, set out to determine the best form of government. Is it monarchy? Oligarchy? Democracy? It’s a rationalistic exercise. So when we open our Bibles and go looking for that kind of discussion, we get frustrated because it’s not there. There’s no Aristotle-like comparison of episcopalianism, presbyterianism, and congregationalism.

If you want to find the biblical “model” or “form” of church government—to use that language—I’d encourage you to pay special attention to how Jesus commissions and authorizes the apostles and local churches to bind and loose on earth what’s bound and loosed in heaven with the keys of the kingdom in Matthew 16 and 18; how he commissions his disciples to make disciples in Matthew 28; and how he gives elders oversight in a number of passages. Consider carefully each of these biblical commissions and authorizations, and you will find your way toward a biblical polity!

One of your main contentions is that church polity uniquely protects the what and the who of the gospel. That sounds pretty important. Can you elaborate?

That agreement on the content of the gospel and the status of your professions is the beginning of polity. It’s a form of accountability that helps to protect the gospel since you’re now in a position to correct one another should one of you begin to stray. Notice in Matthew 18:20, Jesus employs that ancient Jewish principle for testifying in court—two or three have to agree with one another—and applies this legal glue to gathering “in his name.” When these two or three or three thousand get together and agree they all believe in the same Jesus, his authority is present and they are a church, capable of exercising the keys. This protects the who and the what of the gospel. It doesn’t leave gospel accountability to every individual.

What’s so bad about a philosophy of ministry that puts belonging before believing? Isn’t “entering the community” the very thing that often precedes—and leads to—“embracing the faith”?

Do not be unequally yoked with unbelievers. For what partnership has righteousness with lawlessness? Or what fellowship has light with darkness? What accord has Christ with Belial? Or what portion does a believer share with an unbeliever? What agreement has the temple of God with idols? For we are the temple of the living God. (2 Cor. 6:14–16)

It’s hard to know how we can reckon the idea of unbelievers “belonging” to the church with Paul’s words here.

Now, if all people mean by that kind of language is, be really warm, friendly, and welcoming to outsiders, both in your gatherings and in your lives, then I agree entirely! Of course we should do that. My objection is to any language that suggests a non-Christian really does belong to or has entered Christ’s new covenant community. In the long run, in fact, I think this kind of language will prove harmful evangelistically and create nominal Christians. For the sake of evangelism, what we want the world to know is (1) belonging to this community of Christ’s people is the most wonderful thing in the world, (2) you don’t belong, (3) you really should want to belong, (4) and the cost of admission is repentance and faith in Jesus.

“Elder” and “deacon” aren’t the only offices in a church, you suggest. What’s the third, where do you see it in Scripture, and why is it significant?

The Presbyterian Charles Hodges describes an “office” as something that you cannot simply assume at pleasure; you must be “appointed thereto by some competent authority. It involves not only the right, but the obligation to exercise certain functions . . . and it confers certain powers or prerogatives, which other men are bound to recognize and respect.” As a congregationalist, I believe every church member meets these criteria.

Church membership, I would argue, is how we are re-established in Adam’s role of priest-king. Each one of us as a member has been authorized by Jesus in Matthew 16 and 18 and 28 with expanding the borders of Eden through evangelism and disciple-making (like kings), as well as separating the holy from the unholy and keeping serpentine intruders out (like priests). I’m not sure if my fellow co-editor (Mark Dever) is willing to call membership an office, but if he doesn’t, he’s an inconsistent congregationalist (insert smiley emoticon here).

What most fundamentally distinguishes congregationalism from any form of presbyterianism or episcopalianism?

We don’t put it like this in Baptist Foundations, but the short answer is that congregationalism makes every member responsible for establishing churches, for proclaiming the gospel, and for protecting the gospel faithfulness of a church’s members. Presbyterians and episcopalians make the elders and/or bishops responsible for this work.

To get a bit more technical, both presbyterians and episcopalians, at least of the evangelical variety, generally concede that the whole church possesses every necessary power for organizing as a church and conducting gospel ministry. For instance, the Presbyterian Church of America’s Book of Church Order says that Jesus vests power “in the whole body, the ruler and the ruled, constituting it a spiritual commonwealth.” But then non-congregationalists go on to argue that, other than in electing officers, the elders or bishops exercise that authority. So the whole church possesses authority, but the elders or pastors exercise that authority. Not all non-congregationalists employ this possession/exercise distinction. Episcopalians are more likely to use an esse (“being”)/bene esse (“wellbeing”) distinction. But the point is, all evangelical Protestants since Luther have felt a doctrinal pressure to find some way to account for the priesthood of all believers in a church’s governing structures. The Presbyterian James Bannerman, for example, concedes that a group of believers on a desert island must have some way of organizing and living as a church if all their elders die. And this is a property of the fact that faith doesn’t come through the church hierarchy.

What makes congregationalists different is that they take the priesthood of all believers seriously! They say that you don’t actually possess authority you cannot exercise. And it’s no good to say that it’s exercised in electing elders (like the PCA Book of Order does) if you cannot also remove those elders. So a congregationalist believes the whole church both possesses and exercises church-organizing authority, while the elders possess the distinct authority to lead the congregation in using its authority. Now, congregationalists also say that the congregation should submit to the leadership of the elders so long as the elders are leading biblically (Heb. 13:17; 1 Pet. 5:5). The church’s authority, in that sense, will typically be used to support the elders’ leadership and should only go against them as a rare veto power or emergency break.

Matt Smethurst is managing editor of The Gospel Coalition and author of Before You Open Your Bible: Nine Heart Postures for Approaching God’s Word (10ofThose, 2019), 1–2 Thessalonians: A 12-Week Study (Crossway, 2017), and Deacons: How They Serve and Strengthen the Church (Crossway, April 2021). He and his wife, Maghan, have three children and live in Louisville, Kentucky. They belong to Third Avenue Baptist Church, where Matt serves as an elder. You can follow him on Twitter.

4 4 Things I Want My Daughters to Know