Last week Josh Harris posted on Instagram that he and his wife were separating after 20 years of marriage. Because Harris is considered a foundational influence on “purity culture,” the announcement has launched fresh criticism and debate about the movement.

What is purity culture?

“Purity culture” is the term often used for the evangelical movement that attempts to promote a biblical view of purity (1 Thess. 4:3-8) by discouraging dating and promoting virginity before marriage, often through the use of tools such as purity pledges, symbols such as purity rings, and events such as purity balls.

What are purity pledges, purity rings, and purity balls?

Purity pledges are vows taken by teenagers and young adults to abstain from sex before marriage. A prime example is the original pledge from True Love Waits (1993), which read: “Believing that true love waits, I make a commitment to God, myself, my family, those I date, and my future mate to be sexually pure until the day I enter marriage.”

Purity rings are sometimes worn as outward symbols by those who have made a purity pledge. The rings were popularized by the Christian ministry The Silver Ring Thing, which promoted abstinence primarily through music events. A decade ago, the rings were worn by several young actors and pop stars, including Miley Cyrus, Demi Lovato, Selena Gomez, and the Jonas Brothers.

Purity balls (or Father-Daughter Purity Balls) are formal dance events attended by fathers and their daughters that promote virginity until marriage for teenage girls. At the balls the fathers would often sign a pledge that they would be the example of purity and model integrity for their daughter. The dances were originally conceived in 1998 by a California couple, Randy and Lisa Wilson, as a way of “celebrating God’s design and life’s little growth spurts.”

How did the purity culture movement get started?

The purity culture movement began in the 1990s as Christians who were children or teens during the beginning of the 1960s-era sexual revolution began to have children and teenagers of their own. By the early years of 1990s, AIDS had become the number one cause of death for United States men ages 25 to 44, and the teen pregnancy rate had reached an all-time high. The number of premarital sex partners had also increased substantially since the 1970s. For example, in the 1970s only 2 percent of American women had more than 10 sexual partners before marriage; in the 1990s that percentage had increased to 10 percent (in 2010 it was 18 percent).

At the time many evangelicals were reacting to the negative effects of sex outside of marriage and attempted to once again ground sexuality in biblical ethics. In 1992 Richard Ross, a youth ministry consultant at LifeWay Christian Resources, presented the theme of “True Love Waits” in a brainstorming session for a potential Christian sex education campaign. A year later Southern Baptists adopted the program with the goal of 100,000 signed commitment cards (i.e., purity pledges) by the time of their next annual convention. In 1994 True Love Waits held a rally in Washington, D.C. with 25,000 youth and displayed 210,000 commitment cards on the National Mall between the Capitol and the Washington Monument. 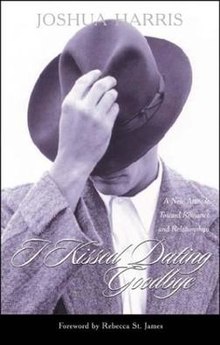 Four years later Josh Harris published his first book, I Kissed Dating Goodbye, which promoted abstinence and popularized the concept of “courting” as an alternative to dating. The book went on to sell more than a million copies and became a primary text of the purity culture movement. (Harris later issued a statement expressing his concerns about the book and asked his publisher to discontinue its publication. He also produced a documentary video called “I Survived I Kissed Dating Goodbye.”)

After the launch of the True Love Waits movement there was a significant decline between 1995 and 2002 in sexual activity for girls ages 15 to 17 and boys ages 15 to 18. The proportion of never-married females 15 to 17 years of age who had had sexual intercourse dropped from 38 percent in 1995 to 30 percent in 2002. For male teens, the percent of those who were sexually experienced dropped in both age groups: from 43 percent to 31 percent at age 15 to 17, and from 75 percent to 64 percent at age 18 to 19. Teen pregnancies also dropped dramatically over the next 30 years. It’s unclear, though, how much credit the movement deserves for these trends.

A study published in 2009 found that the sexual behavior of teens who had taken a purity pledge does not differ from that of closely matched non-pledgers. (Five years after the pledge, 82 percent of pledgers denied having ever pledged.) Another study found the sexually transmitted diseases (STD) infection rate of those who had taken the pledge also did not differ from the non-pledgers.

What are the criticisms of purity culture?

Bible-based concerns about the movement tend to align with the criticism’s Harris made of his own book: it overemphasized the importance of sex, de-emphasized grace, and added unnecessary rules to male-female relationships. As he said in his statement:

There are other weaknesses too: in an effort to set a high standard, the book emphasized practices (not dating, not kissing before marriage) and concepts (giving your heart away) that are not in the Bible. In trying to warn people of the potential pitfalls of dating, it instilled fear for some—fear of making mistakes or having their heart broken. The book also gave some the impression that a certain methodology of relationships would deliver a happy-ever-after ending—a great marriage, a great sex life—even though this is not promised by Scripture.

The other category of criticism comes from those who reject the biblical perspective on sexuality and frame their concerns on secularized (or in the case of some Christians, antinomian) views of sexuality. While they agree with the Bible-based critics about the movement promoting fear and shame, they also think abstinence before marriage is an outdated concept, that the movement promotes gender-based stereotypes, and that it is wrong to exclude homosexual relationships.

How should Christians develop a positive culture of purity?

Where purity culture has failed is in keeping the focus on the body and on sex rather than on Christ.

A primary way we can develop a more positive culture of purity is by practicing the spiritual discipline of chastity, which entails purity in conduct and intention. As Lauren Winner writes in her book Real Sex, “[Chastity] is not the mere absence of sex but an active conforming of one’s body to the arc of the gospel.”

What is the arc of the gospel? Alex Ward explains that it is the arc from enslaved to sin to bondservant of Christ:

from outsider to brother or sister of Christ; from fallen nature to redeemed creation. That arc includes so much more than physical body parts. It includes the other crucial part of humanity: our souls. We are soul-body creatures. Therefore, we cannot only think of our chastity in relationship to our bodies, but to the very way that we are forming and being conformed in our inmost being to the image of Christ as pure, faithful, and chaste beings (Rom. 8: 29; 12:1-2).

We practice chastity to develop purity, not for the sake of our own sexuality, but for the sake of Christ. In 2013 Ross explained why the purpose of the purity movement, rightly understood, isn’t about preventing STDs or teen pregnancy—or even merely being an obedient Christian. The focus, Ross claims, is glorifying and magnifying Christ.

“In the past, True Love Waits young people have often made promises thinking, ‘Jesus wants me to do this because it will make my life better, so bad things will not happen to me, so I will not be a disobedient Christian,’” Ross said. “Now, there is an element of truth in each of those statements, but I detect a shift [toward] ‘Not that I do this so that my life will be better, but I choose purity for Christ’s glory. I am doing this for his sake, not my sake. I am doing this because he deserves adoration, and the purity of my life is a way to show him that adoration.’ The focus comes off of ‘me,’ and the focus goes to ‘him.’ There is no moralism. If I choose sexual purity for the glory of Christ, that is just pure worship.”