Since the annual March for Life was yesterday and Sanctity of Life Sunday is tomorrow, let’s take time today to consider an important pro-life data point: the abortion rate.

The abortion rate is calculated by taking the number of pregnancies terminated by an abortion, multiplying by 1,000, and dividing by the female population ages of between 15 and 44 years. The reported abortion rate in the United States has been declining for decades and declined 25 percent between 2008 and 2014, the last year data is available.

That’s good news—if it’s true. But the reality is that we don’t know the real abortion rate. And we can only guess at what is causing a decline in the reported rate.

Because California is not only the most populous state in the United States but also has some of the least restrictive abortion laws in the country, any abortion statistic that does not include data from that state should be considered less than accurate. For this reason we’ll avoid using the CDC abortion rate in this article.

Unfortunately, the data from the Guttmacher Institute is also less than reliable. Guttmacher obtains its data from surveys given to “2,313 facilities in the universe of potential­-abortion-providing facilities.” They only received responses from 58 percent of the facilities, used health department data for 20 percent of the others, and had to estimate the abortion rate for the remaining 17 percent of facilities. Despite these flaws, this rate is likely to be slightly more useful than the CDC figure.

When we talk about what affects the decline in the reported abortion rate, though, we should keep in mind that we’re talking about changes to a statistic of questionable accuracy.

According to the Guttmacher data, the abortion rate climbed rapidly from 1973, peaked in 1982, and declined almost steadily until reaching a new low in 2014 (the last year for which data is available). 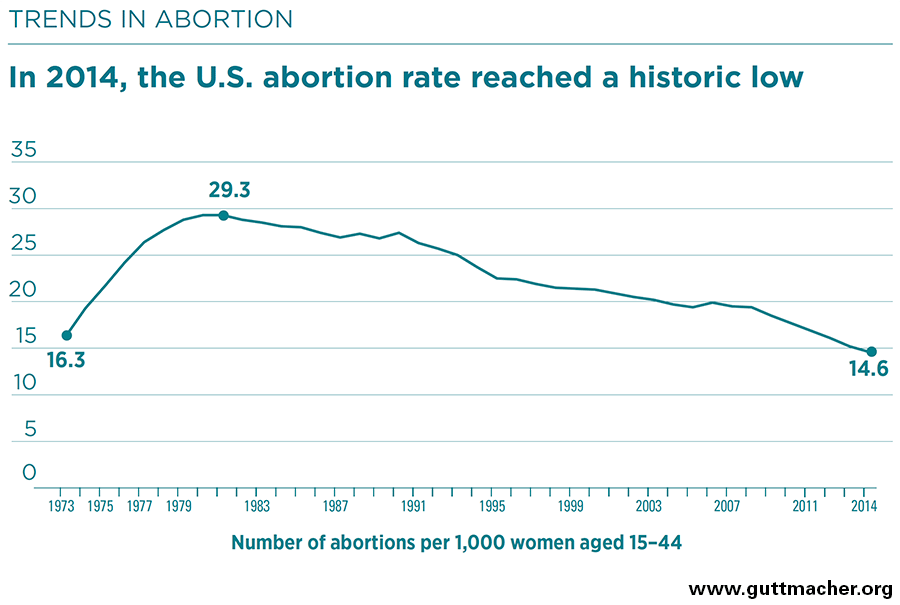 (A chart of the CDC data is not as useful since it’s not as historically reliable. For example, because California stopped reporting data in 1997, the CDC chart makes it appear the abortion rate dropped considerably after that year.)

What caused the decline? Let’s consider some of the factors that are often given credit or blame for changes in the abortion rate:

Every year we hear how particular presidents have had an effect on the abortion rate. So which of these claims is accurate:

(a) The abortion rate declines when a Democrat becomes president after a Republican was in office.

(b) The abortion rate declines when a Republican becomes president after a Democrat was in office.

The answer is C—depending on when you start the measurement. Look at the graph below. The Republican presidencies are in red while the Democrats are marked in blue. Notice a pattern? 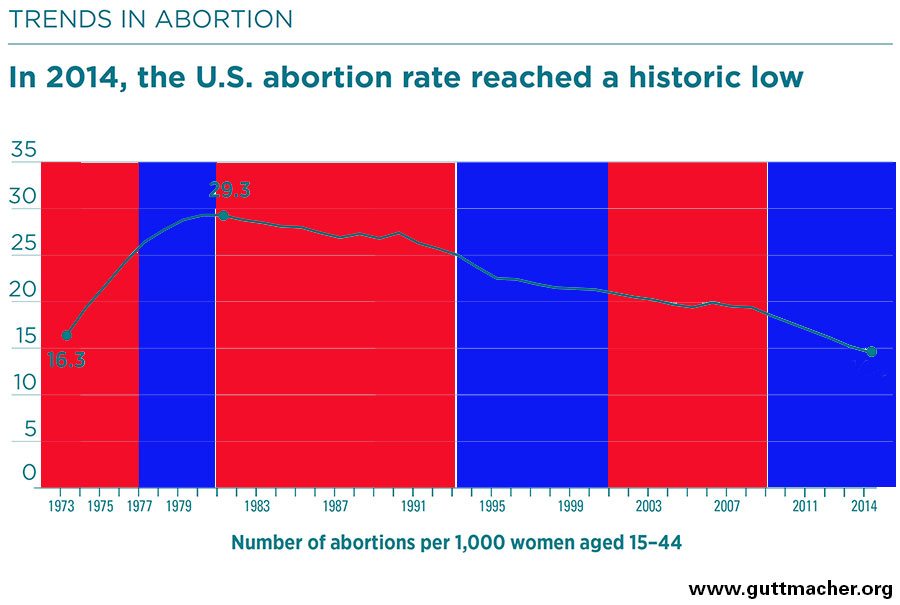 While presidents can have a significant influence on pro-life policies, they don’t seem to have much direct impact on the abortion rate.

Another factor often claimed to affect the abortion rate is the economy. But as with the U.S. presidents, there is no obvious correlation between the U.S. economic condition and the rate of abortion. If there were, we’d expect to see the abortion rate spike during times of high unemployment and low economic growth and drop during the years of economic boom. But that’s not what we find. 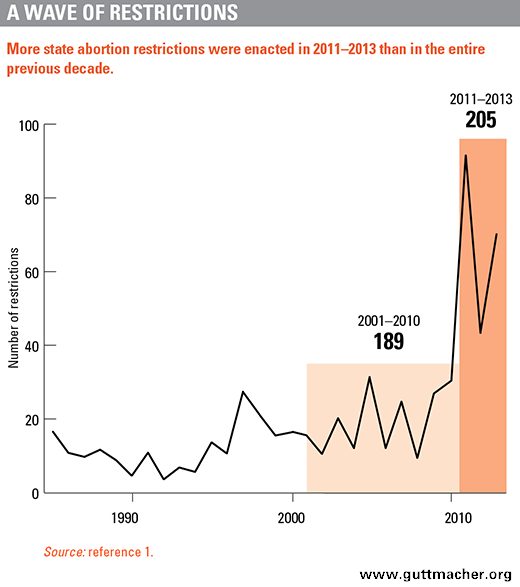 Could it be that America has been steadily becoming more pro-life? This is also unlikely to be the primary cause. As this Gallup poll survey shows, there hasn’t been a significant shift in opinion on the legality of abortion.

There has also not been much change in the overall number of people who call themselves “pro-choice” or “pro-life” since 1999. 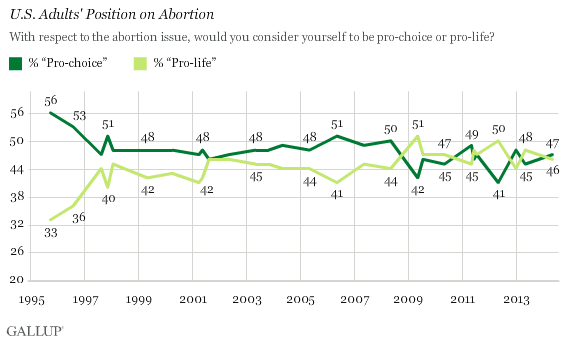 One exception to this claim is younger people, who tend to be more opposed to abortion-on-demand than older generations are.

Many pro-abortion advocates (including the Guttmacher Institute) credit the declining abortion rate to the increased use of contraceptives. This argument has an intuitive appeal (i.e., the fewer unintended pregnancies, the less need for abortion), but as Michael New has pointed out, “It is true that contraception use has increased since the early 1990s, but it’s also true that contraception use has been rising steadily since the early 1960s, and obviously predates the abortion decline by a significant number of years.”

Nevertheless, it appears increased contraceptive use is likely to be at least partially responsible for the decline in the overall rate of abortions. 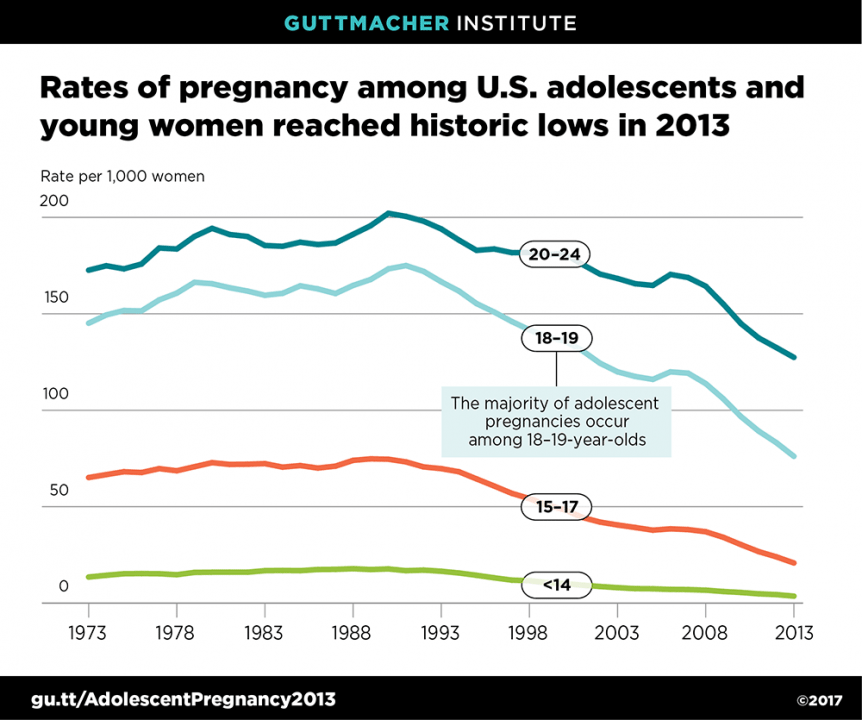 What then accounts for the declining abortion rate? There seems to be no clear answer. If we had to hazard a guess, though, we could say that it’s likely a combination of fewer teens having sex, increased contraceptive use, lower rates of unintended pregnancies, increased opposition to abortion by the young, and a greater willingness to have a child after an unintended pregnancy.

While we may never know for sure what’s the cause, we can thank God for what appears to be a positive shift toward life.