The idea for the “Christian flag” began 124 years ago. Here are nine things you should know about the ecumenical banner for the Christian faith.

1. The idea for the flag originated in an impromptu Sunday school speech.

Charles C. Overton, the superintendent of the Sunday school at Brighton Chapel on Coney Island in New York, had designated an event called Rally Day for Sunday, September 26, 1897. When the guest speaker didn’t show, Overton gave an impromptu speech, using the U.S. flag that draped the podium for his object lesson. After talking about the symbolism of the American flag, he proposed a flag that should represent the Christian church. With the help of a local seamstress, Overton created the flag he had described and presented the first copy the next Sunday.

2. The colors match the American flag but are symbolically Christian.

The colors on the flag match those on the American flag—red, white, and blue. But on the Christian flag, white represents purity and peace, blue indicates fidelity, and red stands for the shed blood of Christ.

3. A renowned hymnodist wrote a song about the flag.

The Christian Flag! behold it,
And hail it with a song,
And let the voice of millions
The joyful strain prolong,
To every clime and nation,
We send it forth today;
God speed its glorious mission,
With earnest hearts we pray.

4. There are at least three pledges of allegiance to the Christian flag.

A version adopted by more conservative churches is: “I pledge allegiance to the Christian flag, and to the Savior for whose kingdom it stands; one Savior, crucified, risen, and coming again with life and liberty to all who believe.”

A ​​third version, adopted by some youth groups, states: “I pledge allegiance to the Christian Flag, and to the Savior for whose Kingdom it stands; one brotherhood uniting all true Christians, in service, and in love.”

5. The Christian flag has its own rules.

Advisory rules for the display of flags is known as a flag code. But until 1938, there were no agreed upon regulations for showing the Christian flag. In that year a young pastor named James Russell Pollock took it upon himself to create a code that would give the Christian flag priority. The Christian flag code states that it should be placed either at floor level, outside the railing to the right of the congregation, or on the right side of the altar, pulpit, or choir as it faces the congregation. When displayed with the American flag, it should be on the same level, to the right of the American flag, and dips only to the cross at the altar.

6. The flag was officially adopted by the Protestant ecumenical movement.

After 45 years of unofficial use by Protestant churches, the Federal Council of Churches (an ecumenical organization that merged into the National Council of Churches) officially adopted the Christian flag on January 23, 1942. The adopted resolution stated, in part: “1) The Cross itself is generally accepted as a good and sufficient symbol for the house of God in the Christian tradition, without the use of a church flag. 2) If a flag or banner representing the loyalty of the church to its Head is used along with the flag of the nation in the sanctuary, the symbol of loyalty to God should have the place of highest honor.”

7. The Christian flag competed with the “Conquest flag.” 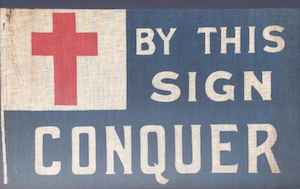 In 1901, a Chicago minister named S. M. Johnson unveiled the “Christian conquest flag,” an “emblem of the spirit of world-conquest for Christ.” Johnson’s flag looked similar to the Christian flag but included the words “BY THIS SIGN CONQUER.”

As the vexillologist Whitney Smith notes, “The paucity of available evidence makes it impossible to determine if this flag preceded the Christian Flag, was developed later as an alternative to it, or was simply created independently at roughly the same time for parallel purposes.”

By 1906, the Conquest flag was used in churches and had been adopted by 20 of the State Sunday School Associations. But by World War II, the Christian flag became the preferred flag in American churches.

8. The flag spread to other countries through American missionaries.

Soon after its creation, the Christian flag was brought to other countries by missionaries from America. As one The Christian Advocate wrote in 1909, the use of the flag “has become almost universal throughout the world.”

A missions journal from 1917 says, “Its use has spread by leaps and bounds not only as an emblem, but in many places it renders a different service. In an African Mission Station it is used as a symbol to the natives when it is Sunday and when Christian services are held.”

9. The flag has always been free to be copied or manufactured by anyone.

To make sure the flag was available to all Christians, Overton declined to patent or trademark his creation. As his associate Ralph Diffendorfer wrote in 1917, “the Christian flag is not patented and is free from commercialism. Anyone may manufacture it, and it may be used on all proper occasions. Christian flags may be displayed at conventions, conferences, church demonstrations, and parades, and with the American flag may be used for general decorative purposes. For boys’ and girls’ societies and clubs and for the church school, especially on program occasions, the two flags may be presented and saluted.”