I have two teenage sons. So one conversation I have over and over—with my kids, my husband, my friends—is how to handle video games.

Sometimes it feels like the digital media battle is already lost. No matter how you try to contain them—banning phones at the table or limiting games to weekends—it seems like a kid is always pushing for more. After all, everyone else in her class has a phone. And all his friends get to game constantly.

After a while, it can feel discouraging. Maybe it doesn’t matter. Maybe we parents should just give up. Maybe this is just the way it is now.

But over the past year, I’ve been talking to high school and college students about their online habits. And it’s striking how much influence their parents have on their digital media interaction. Even when rules weren’t perfectly obeyed, parental limits seem to help kids later when they set their own limits.

The work we’re doing to approach digital media wisely, as inconsistent and imperfect as it is, matters.

That’s confirmed by a recent study from the Institute for Family Studies and BYU’s Wheatley Institute. There’s a statistical connection between the things you do with your kids, their level of digital media use, and their mental and emotional health.

Here are a handful of stats that stood out to me.

Those who live with their married biological parents—which is roughly 63 percent of American children—spend almost two hours less a day on digital media than their friends in nonintact families. Across the board, they spent less time gaming, texting, on social media, video chatting, and online shopping than those living with a single parent or stepparent. 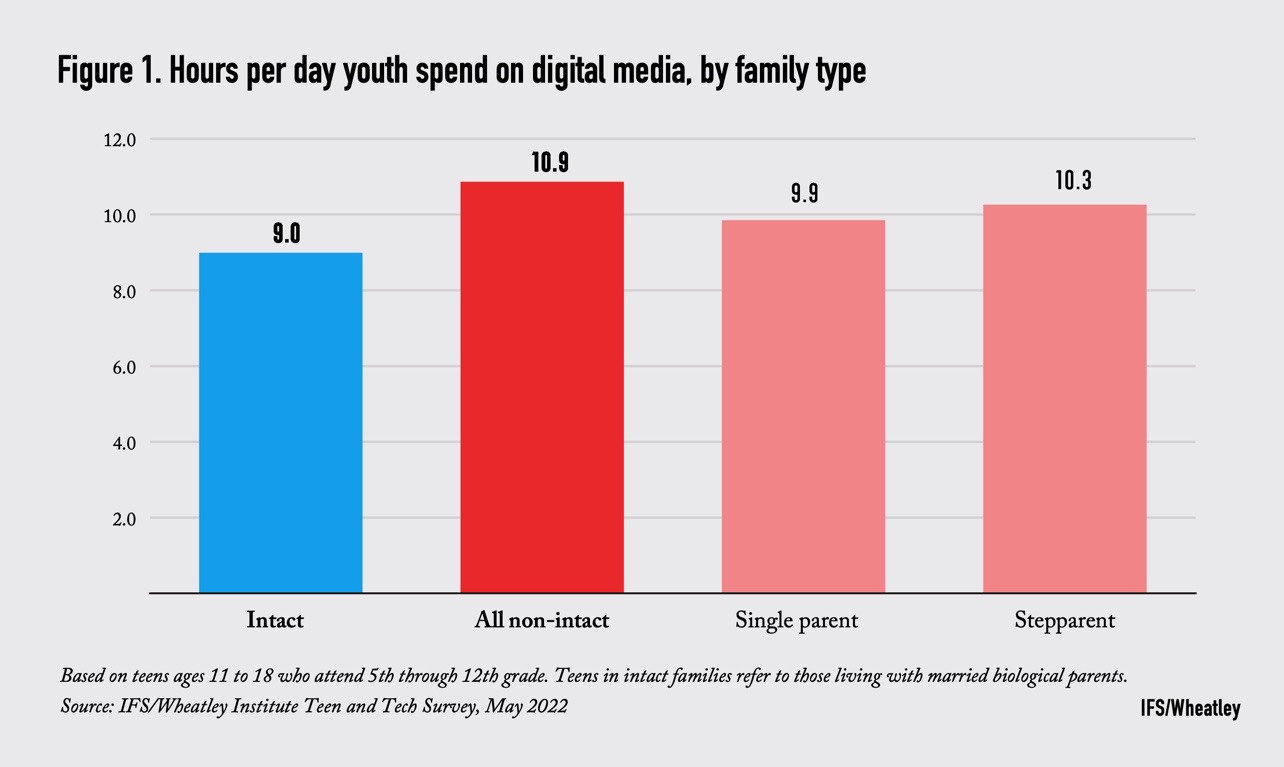 “Because stably married parents generally have more resources and a more consistent bond with the children in their household, they may be better able to handle the challenges of guiding and limiting teen tech use,” the study authors wrote. “By contrast, single-parent families typically have fewer resources—both emotionally and in terms of time—to devote to their children, which may affect their ability to oversee their children’s media use and screen time. Moreover, stepfamilies are less likely to have the kind of stable ties and clear lines of authority between parents and children that are most conducive to establishing clear and consistent discipline.”

This may sound discouraging to many single parents or stepparents. But it doesn’t mean they’re doomed to lose children to digital media addiction. One clear way to combat that is to be mindful of the rules they establish.

Teens in intact families report more restrictions on their digital media use—they’re less likely to be allowed screens after bedtime and screens during family meals, while they’re more likely to have limits on their social media.

Those things aren’t always easy to do—they take intentionality and work. But the payoff is huge.

3. Kids from intact families with low digital media use tend to be less depressed, lonely, dissatisfied with life, and sleep deprived. 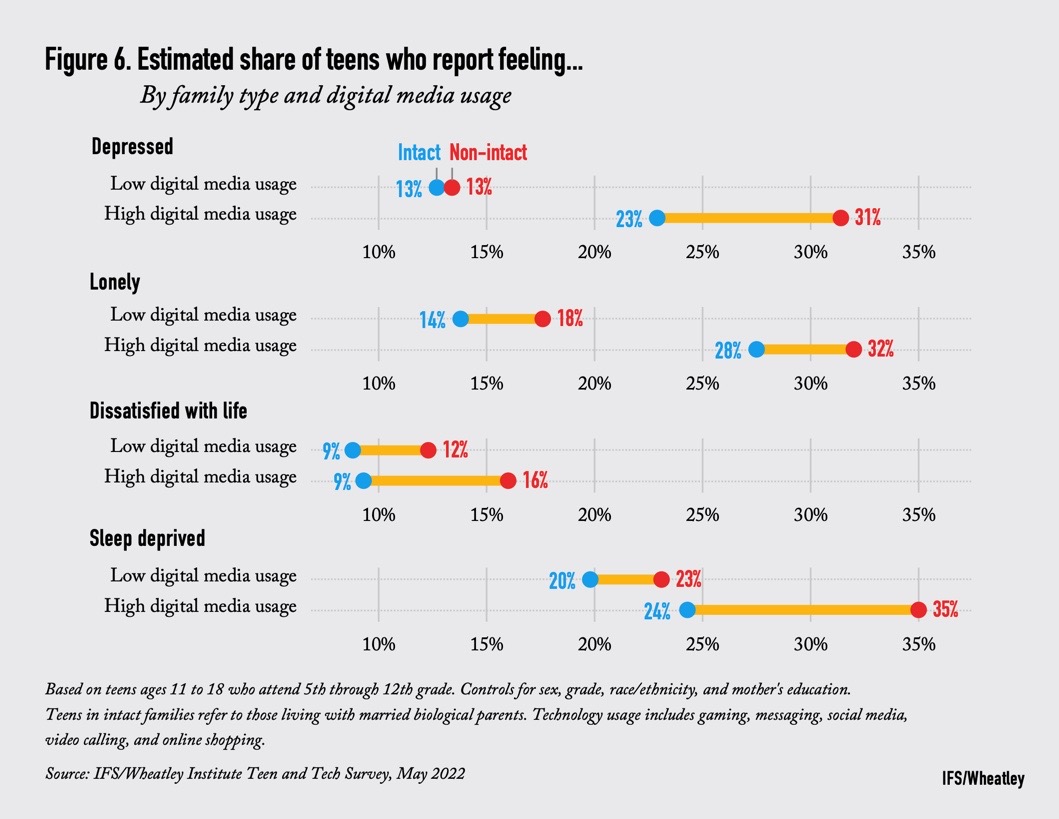 Coming from an intact family mitigates some of those feelings, especially among those with high digital media use—defined here as more than 8 hours a day. But aside from life dissatisfaction, the state of your family has less of an influence on your depression, loneliness, and sleeping habits than your social media use does.

Staying married to your spouse matters for your kids. But for depression, loneliness, and sleep, limiting their digital media matters even more.

As you’d expect, more than 80 percent of moms in single-parent and stepparent families set the rules. But even in intact families, mothers are primarily the ones approving apps and telling kids it’s time to get off (68 percent).

That seems to follow a historical trend line—25 years ago, mothers were more likely than fathers to set limits on the time their children spent watching television or who they hung around with.

5. In all families, parents have a hard time putting down the phone.

Teens report that 15 percent of parents—or one in seven—use their device “almost constantly,” including during meals, discussions, or family activities. The differences in this behavior among married biological parents (14 percent), single parents (17 percent), or those who remarried (12 percent) was small.

Consistently, research shows a link between the heavy use of digital media and a number of troubling social and emotional distress signals. We’d be foolish to ignore those signs and foolish to assume our kids are able to handle the tempting pull of these powerful industries on their own.

Sometimes it can seem impossible to curb the desire or ability of teenagers to find their way online. In fact, half of seventh- and eighth-grade students whose parents have forbidden social media still use it. (So do 38 percent of fifth- and sixth-graders whose parents have told them no.)

Still, this study confirms what we know from the way God structured families—parents do make a difference. Setting and enforcing rules around phone use in the bedroom, around which apps are allowed (and then checking on your child’s device), around how much screen time you’ll tolerate—that all makes a difference. So does offline activity—playing a game, going to the movies, taking a walk, or making dinner together. So does your own media use—your children notice when you can’t put down your phone.

Be encouraged. The time it takes to think through a digital media plan for your household, the energy it takes to convey that to the kids, the persistence it takes to enforce the rules (even imperfectly), the creativity it takes to plan something fun to do with the kids—it’s all worth it.

Your kids are worth the work.