I recently read Tim Keller’s stirring new book Hope in Times of Fear: The Resurrection and the Meaning of Easter (Viking, 2021) [interview]. Here are 20 quotes that caught my attention.

The greatest threat to our hope for a better world is not the natural environment but the various evils that continually spring from the human heart. (xviii)

The resurrection is not a stupendous magic trick but an invasion. (xxi)

Belief or nonbelief in the resurrection is never merely an intellectual process. We are not computers. We are flesh-and-blood human beings, and when we confront the claim of the resurrection, we address it not only with logic but with a lifetime of hopes and fears and preexisting faith commitments. And we will never be able to accept it until we see our need for God’s grace. (15)

The resurrection was indeed a miraculous display of God’s power, but we should not see it as a suspension of the natural order of the world. Rather it was the beginning of the restoration of the natural order of the world, the world as God intended it to be. . . . The resurrection means not merely that Christians have a hope for the future but that they have a hope that comes from the future. The Bible’s startling message is that when Jesus rose, he brought the future kingdom of God into the present. (24)

In the resurrection we have the presence of the future. The power by which God will finally destroy all suffering, evil, deformity, and death at the end of time has broken into history now and is available—partially but substantially—now. When we unite with the risen Christ by faith, that future power that is potent enough to remake the universe comes into us. (31)

The resurrection not only brings the future into the present but also brings heaven to earth. (43)

In Jesus’s day the message of the kingdom contradicted all the world’s categories. In our time the Christian faith is seen as something traditional rather than radical and disruptive. Nothing could be further from the truth. (60) 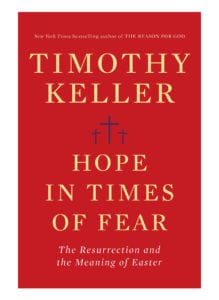 The founders of the other great world religions died peacefully, surrounded by their followers and the knowledge that their movement was growing. In contrast, Jesus died in disgrace, betrayed, denied, and abandoned by everyone, even his Father. Other world religions teach salvation through ascent to God through good works, moral virtue, ritual observances, and transformation of consciousness. In contrast, Christianity is about salvation through God’s descending to us. This is the great difference between Christianity and every other philosophical and religious system. (80)

Unless you are running away from him or running toward him, you actually don’t really know who he is. (98)

As many contemporary thinkers have pointed out, when you create an identity by despising other groups, it makes you dependent in many ways on them. Ironically, the “other” becomes part of who you are. You need for them to stay in their place and to fit your stereotypes of them. And if something threatens your one-dimensional, negative view of them, it shakes your very foundations. (102)

If you are looking at Christianity, start by looking at Jesus’s life as it is shown to us in the gospels, and especially at the resurrection. Don’t begin, as modern people do, by asking yourself if Christianity fits who you are. If the resurrection happened, then there is a God who created you for himself and ultimately, yes, Christianity fits you whether you can see it now or not. If he’s real and risen, then just like Paul, even though he had none of the answers to any of his questions, you’ll have to say, “What would you have me do, Lord?” (111)

Secular conservatism fights for the liberation of the individual from state power while progressivism fights for the liberation of oppressed groups through state power. It is easy for Christians who talk about liberation to be more influenced by one of these political views than by the Bible. Liberation understood in light of the Great Reversal looks very different from either ideology. In short, without the Great Reversal as the lens through which to understand them, the terms love and liberation will end up stamping Christians with the world’s understanding of morality rather than the Bible’s. (132–33)

With all the shouting and anger so prevalent around [racial] issues, I don’t know of a better way forward than for millions of Americans to put on their new selves and start to listen. (140)

The Christian sex ethic was understood by the apostles to be a nonnegotiable part of orthodoxy, one of the core beliefs of Christianity. What Christians taught and practiced about sexuality was as much a necessary implication of the gospel and the resurrection as were care for the poor and the equality of the races. This makes it impossible to argue, as many try to do, that what the Bible says about caring for the poor is right but what it says about sex is outmoded and should be discarded. (148–49)

In many ways the modern sexual revolution is surprisingly retrograde. It is a return to the view that reigned in the Roman world, namely, that sex is basically a physical appetite and that it is unrealistic and unhealthy to confine it only to marriage. But from the #MeToo movement to the falling rate of sexual activity, marriage, and childbearing, it can be argued that the modern approach to sex is harming us as a society. As a pastor working in Manhattan for almost three decades, I have seen hundreds of people who participated in the modern sexual revolution turn away from it and find greater wisdom, safety, and freedom in the Christian vision and practice of sexuality. (154)

Christians see hard things as indeed hard and not to be sought, but we have been armed with this great truth, namely that when received with faith in God, hard things lead to the best things. (176)

Writing in such dark times helped me see in the resurrection new depths of comfort and power. This is not to claim that this is a better book than others I have written. Let readers be the judge of that. But it is the one in which I felt the most divine guidance and help. (217)