Before I read a work of non-fiction, especially an academic monograph, I glance at the conclusion, assess for myself how much time I believe the book is worth giving, then speed through within the confines of the allotted time frame, identifying the thesis, skipping the familiar, skimming the repetitive, and so on. I’m not going to say how much time I allocated Bruce Gordon’s Zwingli: God’s Armed Prophet, but I will confess I was time and time again unable to simply blitz through. This book deserves slow, thorough, and reflective engagement.

Gordon, a prolific writer in the field of the 16th-century Protestant Reformation, is perhaps best known for his previous biography, Calvin (Yale University Press, 2011), in which he paints a picture of the second-generation reformer of Geneva, John Calvin, as a complex man in complex times. Huldrych Zwingli (1484–1531) in many ways proves to be even more of a complex figure living, if not in more complex times, then in the initial and fastest-developing episodes of the Reformation. 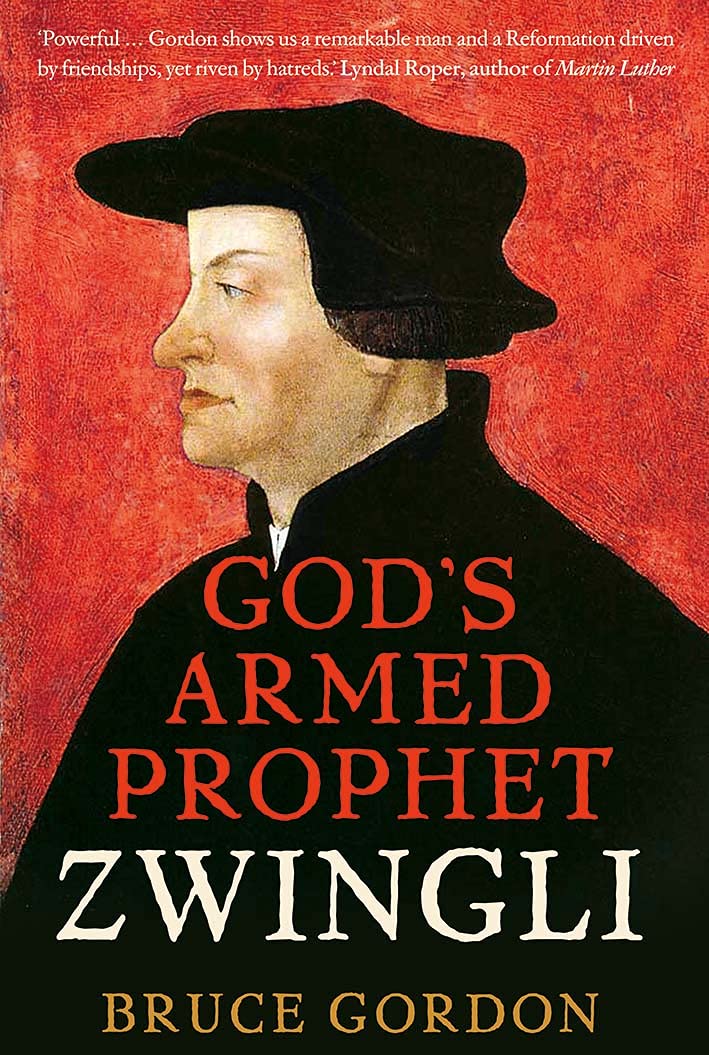 Bruce Gordon presents a fresh interpretation of the early Reformation and the key role played by Zwingli. A charismatic preacher and politician, Zwingli transformed church and society in Zurich and inspired supporters throughout Europe. Yet, Gordon shows, he was seen as an agitator and heretic by many and his bellicose, unyielding efforts to realize his vision would prove his undoing. Unable to control the movement he had launched, Zwingli died on the battlefield fighting his Catholic opponents.

Gordon brings Zwingli to life, showcases his development, and demonstrates that the Reformation was a slow, arduous struggle for those living through it, with no guarantee of success. He presents Zurich’s lead reformer as both gifted and flawed, a man of conviction and compromise who relied on friends and powerbrokers of the age. A man who in no way played a mere supporting role to Luther or just performed the Reformed tradition’s first act, which needed Calvin’s rescue.

Gordon brings Zwingli to life, showcases his development, and demonstrates that the Reformation was a slow, arduous struggle for those living through it, with no guarantee of success.

The author is upfront about the book’s purpose: “This book explores the ways in which competing impulses and contradictory tensions [within Zwingli] became remarkably generative, fecund and destructive” (2). For our purposes, we’ll split Gordon’s narrative of Zwingli’s life into two main sections in order to look at some of these tensions, the first covering the time before Zurich officially broke with the Church of Rome on Easter, 1525, and the second following on until Zwingli’s death on the battlefield.

Gordon introduces us to Zwingli’s childhood world, a valley in the Swiss Alps, a region with a long, martial, and mythical history. He shows how the reformer wanted to retrieve a virtuous past that appealed to his fellow Swiss while downplaying the realities that led to the Swiss mercenary trade that Zwingli hated. Moving from childhood to adulthood, he became a humanist priest and a disciple of the great Erasmus. He excelled in the study of biblical languages and came to the conviction that Scripture is the ultimate authority. Zwingli mastered these disciplines while failing to practice sexual chastity, which would later haunt his public reputation.

Zwingli’s ambition brought him to Zurich as a priest in 1519. He spent the next three years of his ministry holding himself back from openly attacking traditional religion, instead building relationships with fellow reformers like Leo Jud and Johannes Oecolampadius, and consolidating his understanding of the role of the state in matters of religion. By 1523, Zwingli had resigned as priest and became preacher of Grossmünster, the primary church in Zurich. There was a radical disconnect between his preaching, which denied transubstantiation and invocation of saints, and the practice of religion in the city. Zwingli (with his state-sponsored religion) deepened his rift with the Anabaptists (his previous friends), which eventually led to his approval of the Anabaptist Felix Manz’s execution by drowning in 1527.

After the institutional break with Rome in 1525, Zwingli’s ideas began to spread in his region and around the world. This brought him into conflict with Luther, a disagreement that infamously came to a head in the Marburg Colloquy in 1529 when the Lutheran and Reformed wings of the Reformation split over the issue of Christ’s presence in the elements of the Lord’s Supper. Zwingli’s demand that gospel preaching be freely allowed in all Swiss lands, including Catholic ones, instigated the First and Second Kappel Wars, which ultimately led to Zwingli’s demise. He died defending his city with the sword.

Gordon’s final chapters explain why those like Calvin who inherited Zwingli’s reformation initially distanced themselves from him. He was too divisive a figure both theologically and politically at a time when the Protestant world was trying to unify for the sake of survival. Gordon also includes a fascinating chapter on the legacy of Zwingli in the centuries since his death. It’s much more than a “history of research” section one would expect in a doctoral dissertation. Rather, the survey reinforces the thesis about Zwingli’s complexity and serves as an insightful reflection on the relationship of memory and identity.

As indicated in the acknowledgments, this book was a lifetime in the making; the nuance, contextual understanding, and impressive research in the primary sources—including Zwingli’s correspondence and annotations from volumes in his personal library—prove this. Gordon is a professional historian, and this book is primarily historical, yet he has an eye for theology and believes that it matters. He’s also a good writer. His prose is engaging and rarely, if ever, overly academic or dense. He organizes his chronological chapters somewhat thematically, avoiding the tedium of some historical writing. It’s well presented as a story of Zwingli’s life with enough historical context and theology to make sense of it.

He was a divisive figure both theologically and politically at a time when the Protestant world was trying to unify.

In addition to Gordon’s expertise and accessibility, the reader, especially the reader little acquainted with Zwingli, is well served by a chronology of his life, detailed maps of the 16th-century Holy Roman Empire and Swiss cantons, and a generous selection of plates in full color, ranging from Zwingli’s childhood home to the celebration in Zurich of the 500th anniversary of his coming to the city. These, along with the introduction, which concisely summarizes keys to understanding Zwingli in context, helpfully prepare the reader for the narrative.

If people today can name anyone from the Reformation, it’s inevitably Luther and Calvin, and then Zwingli. Luther and Calvin have received disproportionate attention when compared to Zwingli. This isn’t to say that the more familiar two have more attention than they deserve, but that Zwingli has less—which has led consistently to simplistic caricature and triumphalism. I hope Gordon’s Zwingli: God’s Armed Prophet will help to remedy this problem. It will certainly be my first recommendation to those interested in the man standing at the forefront of the Swiss Reformation.