Ronald Nash once said, “One of the more important things a philosopher can do for others is to help them realize what a worldview is, assist them in achieving a better understanding of their own worldview, and aid them improving their worldview.” Nash took this job seriously and has many books to prove it. In the book from which this quote derives, he provides criteria for how to choose a worldview, as well as several avenues for evaluating worldviews.

While Nash’s presentation is helpful, it isn’t what you’d give someone who reads few books. In a world where people aren’t often interested in thinking critically, a philosopher has to get creative in his presentation. When many are more interested in taking the latest online quiz to figure out which character from Harry Potter or The Hunger Games they really are, getting them to think about philosophy is difficult to say the least.

This is where James Anderson enters and drops a methodological game-changer on the philosophical playground. In What’s Your Worldview: An Interactive Approach to Life’s Big Questions [interview], Anderson, professor of theology and philosophy at Reformed Theological Seminary in Charlotte, synthesizes the “choose your own adventure” genre with worldview analysis.

While What’s Your Worldview is like those books many of us remember from childhood, it’s not exactly a “choose your own adventure” book. The similarity is that we’re not expected to read the pages sequentially but instead “make key decisions or choices at a number of points in order to determine the outcome” (11). But the adventure is not a story per se, though you could use your imagination to see it as “the quest for the most coherent worldview.”

A worldview “represents your most fundamental beliefs and assumptions about the universe you inhabit,” Anderson explains. “It reflects how you would answer all the ‘big questions’ of human existence, the fundamental questions we ask about life, the universe, and everything” (12). It is “as indispensable for thinking as an atmosphere is for breathing” (12–13). But, much like the atmosphere, it’s something most of us take for granted since it’s something we look through or along rather than at. Anderson wants to change this perspective, however, and he’s put together an ingenious way to accomplish his goal.

The brief book has three parts: questions, categories, worldviews. The 21 different worldviews are drawn from the five main categories: atheist, theist, quasi-theist, finite-theist, and non-Christian theist. The categories are then largely derived from how you answered the 21 questions in section one.

The opening question is about freedom (19) and whether or not you can make free choices. Regardless of your answer, you flip to the next page where you’re greeted with Anderson’s explanation of his joke and the serious point that follows. We all have the intuition that we can make free choices, and Anderson wants to underscore how our choices shape our worldview (20). With that point out in the open, the next question is whether there’s any objective truth (21). If you choose “no,” you’re directed to turn to the worldview page for relativism (91), given a brief explanation of why it’s a dead end, and then directed back to the truth question.

If you go back and change your answer (“Yes, there is objective truth”) but then say “No, we can’t know the truth” (to the knowledge question), you end up on the worldview page for skepticism and find the same dead end as on the relativism page. While variations of these two worldviews are fairly predominant in our culture, Anderson shows within two questions of his book how neither is conducive to coherent thinking. 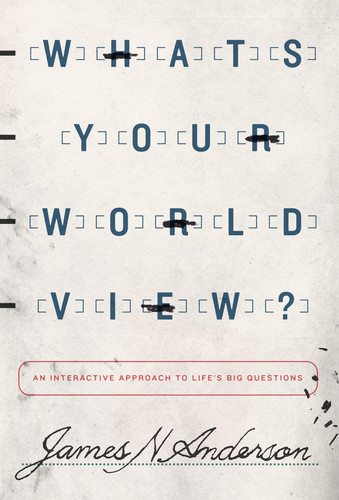 What’s Your Worldview?: An Interactive Approach to Life’s Big Questions

What’s Your Worldview?: An Interactive Approach to Life’s Big Questions

In order for any sort of serious “worldview quest” to begin, you have to be on board with some kind of objective truth and ability to know the truth. Rather than making that point in the introduction, though, Anderson gives readers the freedom to explore it on their own. To say there is no objective truth, or that we can’t know the truth, is to foreclose worldview development. More tellingly, it is to intellectually espouse a worldview that one cannot actually live out.

In this way, readers are allowed to see where their current philosophical opinions lead and to have the opportunity to “try on” different answers to perennial questions. This method accomplishes Anderson’s goal of helping readers identify and clarify their worldview, consider the big questions of life, and appreciate the difference in worldviews (14).

Because not all worldviews are created equal, Anderson helps readers indirectly see that choices have consequences. If you deny objective distinctions between good and evil (the goodness question), for example, it leads unavoidably to nihilism (75). Anderson explains why this view is a dead end and suggests readers reconsider the path that brought them there.

In doing so, he not only provides a helpful tool but also models a charitable apologetic method. In a winsome way Anderson invites dialogue and reevaluation. Even the worldview page for Christianity (60) has a stop sign and suggested questions for re-evaluation. This decision shows sensitivity to readers’ intellectual and spiritual journey, such that if they end up on the Christianity page but don’t like it they can rethink the answers that brought them there.

Some readers may be surprised at the outcome of their answers. I assume that’s something Anderson was hoping to accomplish. As wise Christians use this book, it will hopefully become a “pebble in the shoe” of their non-Christian friends that invites further discussion, dialogue, and, eventually, a worldview revolution. If only Ronald Nash could see this new wave of philosophers in action.

Nate Claiborne is a high school Bible teacher who lives with his wife in central Florida. You can connect with him at his blog.