WARNING: You might not want to read Brant Hansen’s Unoffendable: How Just One Change Can Make All of Life Better because, as you read it, you’ll have more opportunities to practice being unoffended.

At least that’s what happened to me several times. As a teaching pastor in a local church, there always seems to be a cluster of people who run a low-grade fever of disappointment with me. Recently, the fever spiked. And despite my “warning” above, I was thankful to have Unoffendable coach me along the way.

But this isn’t just my life, is it? Likely you’ve also found ways to offend others. It’s not hard to do; it’s natural for us as sinners. Moreover, our world—sometimes even Christian subculture—trains us not to have a chip on our shoulder but a lumberyard. We see this when the predictable cultural “buttons” are pushed concerning issues like abortion and marriage, and now bathrooms, but also in less expected ways. Consider John Piper’s article last winter on guns and self-defense. The volley of response articles revealed his article didn’t simply touch a nerve; it grabbed one with tweezers and yanked.

And surely this presidential election year, as it has already, will continue to multiply opportunities for offense. How shall we respond to these provocations? I loved how Russell Moore responded to Donald Trump when Trump tweeted that Moore is “A nasty guy with no heart.” Moore replied:

[This is] one of the few things I agree with Donald Trump on. I am a nasty guy with no heart. We sing worse things about ourselves in our hymns on Sunday mornings: we’re a wretch and in need of God’s grace.

But where does this ability to be unoffendable come from? Is it as simple as making a choice to not be offended? And backing up a bit, should we really seek to be unoffendable? Isn’t there a place for legitimate, non-sinful anger? 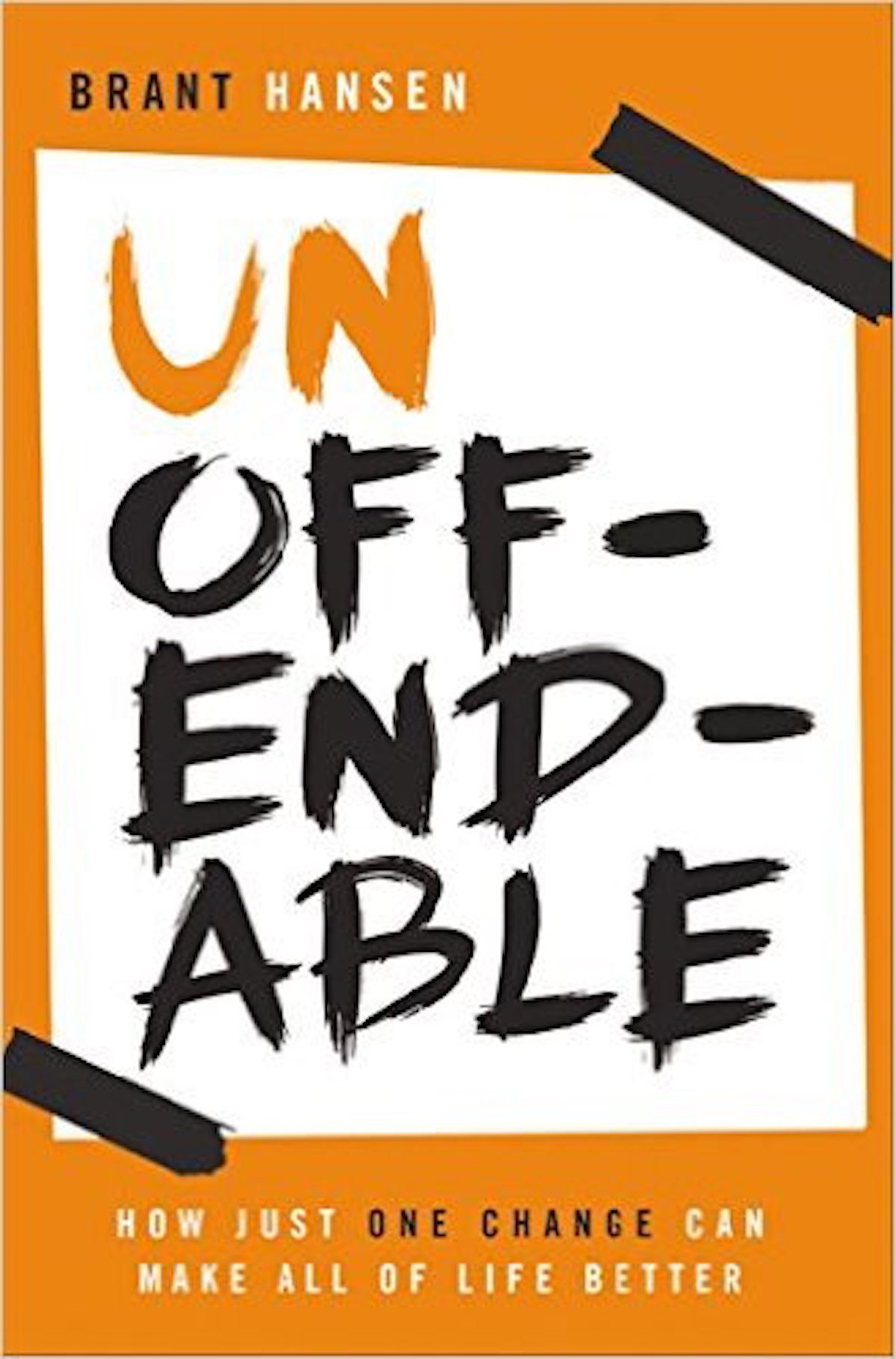 Unoffendable: How Just One Change Can Make All of Life Better

Unoffendable: How Just One Change Can Make All of Life Better

Do You Have a Choice?

Let’s start with the first question. This is where Hansen opens Unoffendable. It’s also the central idea behind the subtitle.

It seems the answer is yes and no. I do think we can choose not to take offense. This choice, however, isn’t made in isolation; the choice to be unoffendable is an interlocking one determined by our answers to a host of other questions. To use an analogy, is the choice to run a marathon just one choice? Well, yes and no. To be sure, it’s a choice, but it’s not a choice made in isolation from other choices about diet, sleep, training, and rest. The same can be said about choosing which car to own. It’s a choice, but one contingent on other things, such as career and income and family size and comfort with debt.

It’s the exposing of this interlocking nature of anger and offense that I found so helpful in the book. That angry father in your church might not be able to stop his rage because his ego is inflamed (184). That guy flabbergasted on social media might not be able to stop because he doesn’t believe in God’s final punishment (69) or is insecure about his own standing before God (128, 181) or doesn’t believe in the biblical view of human depravity (65–67). And I might not be able to overlook the low-grade disappointment in my ministry because I’ve lost my servant-minded approach (150). In other words, being unoffendable isn’t a mere choice to grow “thick skin” (whatever that means), but the holistic choice to pursue a gospel-saturated life.

But might there be a legitimate place for righteous anger? Are there times we should be offended? What Hansen wants us to ask, in theological terms, is whether anger is a communicable or incommunicable attribute of God. That is to say, is anger an attribute God shares with people?

Hansen repeatedly argues the provocative thesis that righteous anger belongs to God and God alone. He cites things like the frequent admonitions in the Bible to get rid of it (Eph. 4:31; Col. 3:8), the danger of it (Jas. 1:20), and its connections to folly (Eccl. 7:9). As for the “Be angry and do not sin” passage (Eph. 4:26a), Hansen points out that the rest of the verse tells us that we, as sinful humans, are not to hold onto it (v. 26b). Oh, don’t forget, anger’s not listed as a fruit of the Spirit (Gal. 5:22, 23). He also employs quotes from Dietrich Bonhoeffer and Martin Luther King Jr., to buttress his argument.

On this point, however, I think Hansen is wrong. Consider systematic theology textbooks (such as Erickson, Frame, and Grudem, as well as Bavinck, Berkhof, and Bird). It would appear they all see included within the imago Dei a sharing of God’s love, holiness, and justice, and it seems to me (and others) that as these shared attributes combine, there ought to be a place—albeit a small and delicate one—for an affection that accords with the injustice of our world. Could we call that affection “righteous anger”? Consider the exchange between Nathan and David in 2 Samuel 12:1–15. God uses the prophet to arouse a flash of anger in David, which prompts his repentance (vv. 1, 5). And consider Jesus’s praise of the Ephesian church for “hating” a particular false teaching (Rev. 2:6). Other passages seem to argue the same (see, e.g., Ps. 97:10).

But I must also say that on this point, before reading Unoffendable, I was wrong. I’m so thankful Hansen showed me how. Whatever space I thought “righteous anger” could legitimately occupy, I’d assumed it was much larger than it really is. I’d assumed anger was like a huge Humvee when God wants human anger to be more like a tiny Smart Car with the battery on low.

Unoffendable is accessible, even conversational. Hansen is an excellent storyteller. You’ll love the story he tells about doing mission work in Indonesia. A Muslim cleric was so impressed with Hansen that he implored him to take his children back to America (167–70). And personally, I enjoyed the goofy chapter titles. For example, chapter 22 “Here’s the Part Where I Talk About Some Danish People,” and chapter 23, “Forget Danish People—Let’s Talk About Your Elbow.”

Brant Hansen works for CURE International, a Christian organization that operates charitable hospitals all over the world. But if you’re familiar with him, it’s probably as the host of a syndicated Christian radio program (also available by podcast). If I had a working radio in my car, I would surely listen to him. But my radio is broken. A few years ago, my kids stuffed coins into its CD player because they thought that’s what the slot was for.

When it happened, it’s possible I got “a little” angry. I could’ve used Hansen’s book back then. I’m glad I have it now, because Christians, as Hansen says, should be the least offendable people in the world.