What comes down must’ve once gone up—and perhaps it can again. Such is the animating logic of Robert Putnam’s optimistic new book, The Upswing: How America Came Together a Century Ago and How We Can Do It Again (written with Shaylyn Romney Garrett).

Published in conjunction with the 20th-anniversary edition of Putnam’s magnum opus, Bowling Alone, this new offering suggests a future for American society by looking beyond the post-1960s narrative of decline to an earlier story of gains in the Progressive Era’s reversal of the late 19th-century Gilded Age.

Putnam marshals a wide array of social-science data to chart remarkably similar trends in the last 125 years in economic equality, political compromise, social cohesion, and cultural altruism. The result is an inverted U curve, with a peak in the mid-1960s and mirrored low points today and at the end of the 19th century—eras marked by economic inequality, political polarization, social fragmentation, and cultural narcissism. These striking similarities between the Gilded Age and ours provide not only a sober reckoning, but also hope for reversal and renewal. 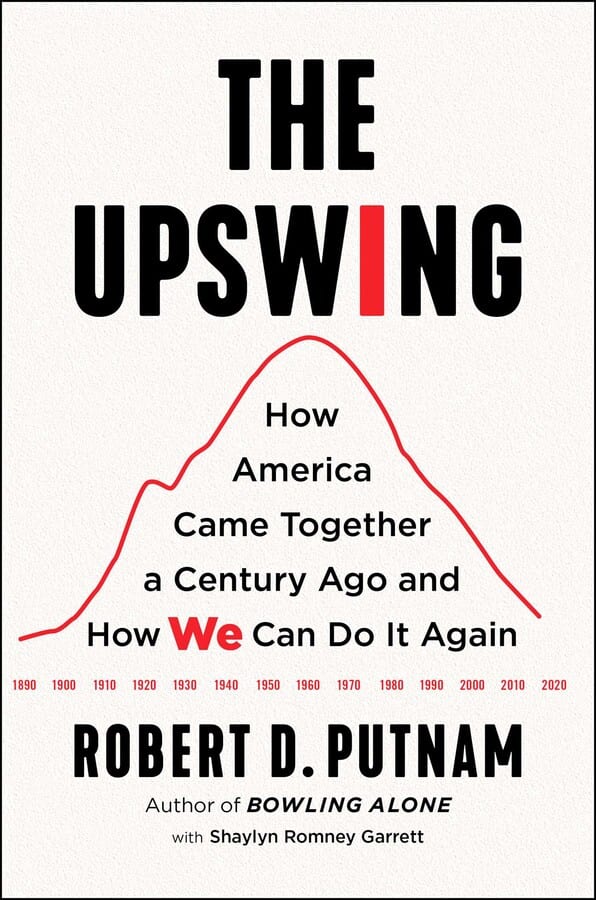 The Upswing: How America Came Together a Century Ago and How We Can Do It Again

The Upswing: How America Came Together a Century Ago and How We Can Do It Again

Deep and accelerating inequality; unprecedented political polarization; vitriolic public discourse; a fraying social fabric; public and private narcissism—Americans today seem to agree on only one thing: This is the worst of times. But we’ve been here before. During the Gilded Age of the late 1800s, America was highly individualistic, starkly unequal, fiercely polarized, and deeply fragmented, just as it is today. However as the 20th century opened, America became—slowly, unevenly, but steadily—more egalitarian, more cooperative, more generous; a society on the upswing, more focused on our responsibilities to one another and less focused on our narrower self-interest. Sometime during the 1960s, however, these trends reversed, leaving us in today’s disarray.

In a sweeping overview of more than a century of history, drawing on his combination of statistical analysis and storytelling, Robert Putnam analyzes a remarkable confluence of trends that brought us from an “I” society to a “We” society and then back again. He draws inspiring lessons for our time from an earlier era, when a dedicated group of reformers righted the ship, putting us on a path to becoming a society once again based on community. Engaging, revelatory, and timely, this is Putnam’s most ambitious work yet, a fitting capstone to a brilliant career.

Using history as a guide, Putnam holds out the Progressive Era (roughly the 1890s to 1920) as a prototype for a new upswing away from individualistic “I” values and toward communitarian “we” values. He sees in the Progressive Era a “moral awakening,” but one uniquely able to move past outrage, cynicism, and ideological purity to build pragmatic, collaborative, solutions-based reforms—all from local contexts, led by a younger generation, and carried along through the creation of new institutions and associations.

At the outset, it’s important to recognize Putnam’s rhetorical power. As with all data-driven social commentary, the book is part observation and part prescription. This dual feature requires careful reading. The observation element (the inverted U curve that graces the cover) is presented with objective scientific authority, but there is a tendency to illegitimately transfer that same scientific authority to the prescriptive commentary.

Observing the “I-we-I” curve of the 20th century across diverse fields is a major achievement of Putnam’s work, but it quickly leads to three contested questions: (1) What caused the gains of the early 20th century? (2) What caused the decline that began in the mid-1960s? and (3) How (if at all) can these lessons be applied to understanding and renewing American society in 2021? Lamenting the 1960s and holding up the Progressive Era as inspiration is one thing; drawing the correct applications from broad movements with unique historical contexts is quite another—and requires wisdom deeper than and beyond the quantitative data.

The chief insight of Putnam’s work is the pre-1960s story, and in it is a subtle polemic against certain alternative accounts of our cultural moment. At the highest level, Putnam’s narrative dispels simplistic notions of an American golden age ruined by the hippies. Some of the cultural flaws of the past year have been here before, and they are perhaps more cyclical than apocalyptic. This provides a realism and hope that is often lacking in contemporary conversations about culture.

Some of the cultural flaws of the past year have been here before, and they are perhaps more cyclical than apocalyptic.

At the same time, Putnam’s narrative would seem to short-circuit the type of intellectual-historical arguments favored among conservative Christians. These arguments generally agree that the 1960s represent a major turning point, but see in it (and the decades that followed) the full flowering of centuries of intellectual development dating back through some combination of postmodernism, Freud, Marx, Protestant liberalism, Romanticism, and the Enlightenment.

Putnam’s up-and-down story would resist a grand intellectual narrative of decline and instead, consistent with the pragmatism of his Progressive Era heroes, look for solutions that don’t require forcing the Enlightenment genie back in the bottle. It’s worth noting as well that a Progressive Era solution to our cultural woes provides an especially agreeable solution for political liberals—as Putnam notes, the culmination and triumph of Progressive Era ideas was found in Franklin Roosevelt’s New Deal programs.

Is the Progressive Era Worth Repeating?

This points to a broader question that may occur to Reformed evangelicals who know their history: do we really want to return to the early 20th century? Indeed, a conservative account of intellectual history would place the Progressive Era as a crucial step on the way to the 1960s and beyond. This was the era when German liberal Protestantism took firm hold in American Christianity. It was the age of the social gospel, which Putnam lauds as the moral conscience of the Progressive Era, and of the fundamentalist-modernist controversy.

In many ways, this was a tragic era. Conservative and confessional believers suffered major cultural defeats, most poignantly in the 1929 reorganization of Princeton Theological Seminary. While J. Gresham Machen and friends retrenched to form Westminster and the Orthodox Presbyterian Church, millions of Americans were left in mainline pews under the pastoral care of theological liberals who denied fundamental aspects of the faith—a faith many of their children and grandchildren would subsequently leave. For Reformed evangelicals, these are times to be remembered with caution rather than nostalgia.

Institutional Promise of the Church

If we can’t celebrate the particulars of the Progressive Era, there are broad lessons we can draw. Putnam is likely right that one of the great contributing factors to the societal cohesion of mid-century America was the Progressive Era’s multiplication of clubs and associations. Here it’s helpful to read The Upswing in conversation with Yuval Levin’s A Time to Build.

For Reformed evangelicals, these are times to be remembered with caution rather than nostalgia.

Though they differ politically and in their assessment of the Progressive Era, Levin and Putnam ultimately agree on the value of institutions. Both thinkers identify the loss of institutional trust as a defining feature of our modern society. And thus they both point to institutional renewal as a key to societal healing—recognizing, in particular, that religious institutions have a leading role to play.

The church can’t quickly reverse 500 years of intellectual history, but it can go a long way in addressing our social isolation and fragmentation. How? By simply being itself and bringing people together across our many divides. As Christians seek the welfare of this world, they can be profitably involved in the formation and renewal of a host of institutions. But they should start by reinvesting in the one institution that was formed by Christ himself—the church.

Chris Colquitt is the campus minister for Reformed University Fellowship (RUF) at Northwestern University. He is a graduate of Princeton University, the University of Virginia School of Law, and Westminster Seminary California. Before entering ministry, Chris practiced law in Texas. He lives in Evanston, Illinois, with his wife and four children.