In the last decade or so, the narrative of how we became secular has been presented in a variety of ways.

It’s seen as a long-awaited emancipation from the stultifying darkness of institutional Christianity (A. C. Grayling), the unintended consequence of Protestantism taken to its logical conclusion (Brad Gregory), the public outworking of the Christian focus on the dignity of every individual (Larry Siedentop), a fundamentally nihilistic propaganda campaign run by Western Europeans in defiance of all constraints (David Bentley Hart), the disenchantment of the medieval world alongside the formation of a new social imaginary (Charles Taylor), the full flowering of the inclusive impulse that has been part of Christianity since the beginning (Tom Holland), or a combination of the above. Sometimes the story is told with glee (Edward Gibbon), sometimes with wistfulness and sorrow (many evangelicals, past and present), and sometimes with a sense of foreboding (Friedrich Nietzsche).

Even those who’ve never read these writers—including most of the people in our churches—have a story of some sort, however sketchy, that gets them from medieval Christendom to post-Christian secularism. 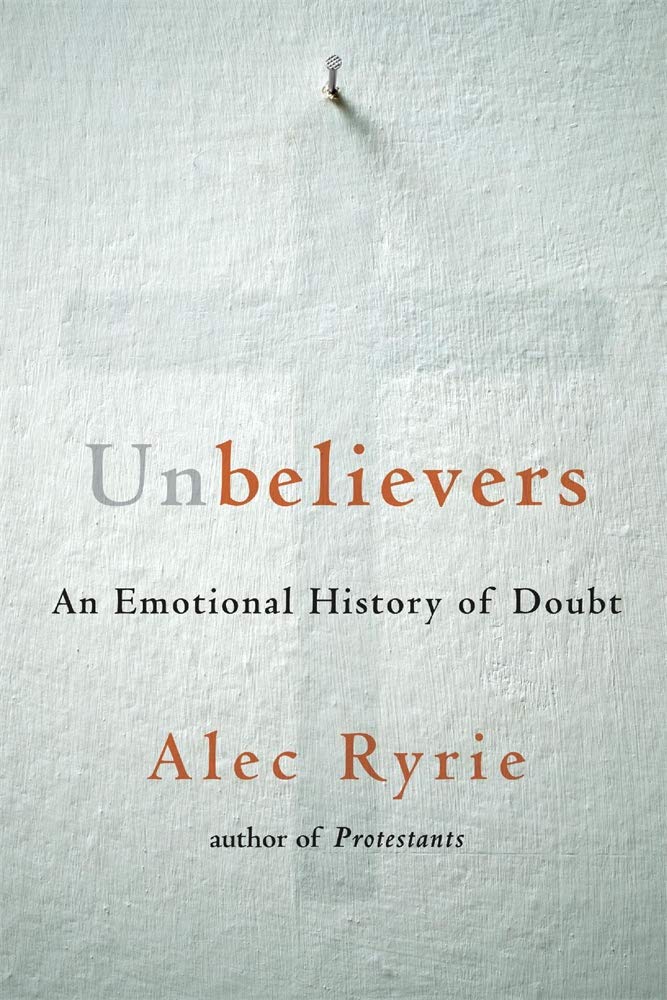 Unbelievers: An Emotional History of Doubt

Unbelievers: An Emotional History of Doubt

Alec Ryrie—professor of the history of Christianity at Durham University and professor of divinity at Gresham College, London—has one too in his latest book, Unbelievers: An Emotional History of Doubt. But two things make it different from the others I’ve read.

First, he sets out to provide an emotional history of doubt, as opposed to an intellectual or institutional one. The intellectual case for unbelief, he argues, only emerges after many generations of emotional and practical unbelief—and when it does, it emerges as an attempt to articulate and substantiate a posture of doubt that has already been felt, at a visceral level, for some time. “What interests me is that unbelief clearly existed in practice (in some form, at some level) before it existed in theory” (3–4). This will not be news to anyone who has read Augustine, or Pascal, or even Psalm 53 or Romans 1; when we disbelieve intellectually, it’s because we want to emotionally. But Ryrie knows it risks irritating thoughtful atheists. So he takes the sting out of the charge winsomely: “I am not arguing that atheism is irrational. I am arguing that human beings are irrational” (11). Quite.

Second, he starts the story much earlier than most, tracing skepticism of various sorts well back into the medieval period. (His tale begins in 1239, with Pope Gregory IX’s charge that the Holy Roman Emperor was an unbeliever.) Ryrie’s reason for this move makes good sense: if unbelief existed practically before it existed theoretically, then “the crucial juncture in the history of atheism is the period before the philosophers made it intellectually respectable” (4). The result is that the starting point for many secularization narratives—the intriguing pan-en-atheism of Baruch Spinoza (1632–1677), say, and the emergence of doubt which is both publicly expressed and intellectually defended—is the point at which this book concludes. By the time people start professing atheism, agnosticism, or unbelief, Ryrie argues, the game has already been up for some time.

Unbelievers has a roughly chronological shape, beginning with the High Middle Ages. The medieval period didn’t feature the sort of skeptical arguments we’d later find in Hume or Paine, let alone Dawkins or Hitchens, but there is plenty of evidence of skeptical emotions, particularly anger and anxiety (the two emotions on which Ryrie focuses throughout the book). As an obvious example, there was blasphemy. There was “anger with God, hatred for priests, rejection of transubstantiation, skepticism about life after death” (23). There were criticisms of the accuracy of Scripture and allegations of falsely engineered miracles, especially from medical physicians. There was the charge of weakness and political ineptitude in the church, most famously from Niccolo Macchiavelli in The Prince. There was the increasing awareness that many classical texts, which were flooding through Europe at the time, were written by men who were morally impressive but not remotely Christian, which raised questions about whether Christianity was essential for virtue.

With the onset of the Reformation, skepticism became weaponized by Christians, as part of the cut-and-thrust of religious debate. Protestants tapped into the anger and anxiety people felt towards the Roman church, using doubt—for example, towards the doctrine of transubstantiation—as a tool of reform. Catholics retaliated in kind, focusing on doctrines like the sufficiency of Scripture. “At the heart of the Reformation was a battle for credulity” (53), Ryrie argues. In a debate about authority, this may have been inevitable. The result was that doubt moved much closer to the surface, and irreligiosity became more plausible, a development noted both by Catholics like Montaigne as well as Protestants like Calvin.

By the start of the 17th century, “it was generally agreed, Europe was drowning under a rising tide of atheism” (75). It wasn’t that people believed God didn’t exist—that meaning of the word “atheist” came later—but they lived as if he didn’t, in worldliness, libertinism, and mockery of the church. Some accused of atheism were famous: Sir Walter Raleigh and Christopher Marlowe, for instance. Many others weren’t. But their atheism, such as it was, wasn’t defined by “a theory but an emotion: fury. A wild, bitter refusal to submit to authority” (93). Defying God was the ultimate act of protest, the rebellion of preference for angry young men, especially those who wanted things that God had forbidden. “If you loved tobacco and boys in late Elizabethan England, then it was hard not to defy the Church, the Christ and the God in whose name you were commanded to abstain from them” (94).

Alongside this rising anger was a rising anxiety, generated in part by two Protestant emphases. If you’ve read the Puritans, you will probably have spotted both of them. The first was faith: “As the era’s competing churches raced to secure the high ground, their definitions of ‘belief’ became ever more rarefied. . . . Belief became both glorious and unattainable” (109). The second, for many, was predestination: “Were they or were they not among those predestined to salvation? How could they ever be sure?” (111). When you combine these internal pressures with the formidable external ones facing Europeans—the discovery of entire continents where nobody was Christian, and the collapse of Christendom into warring factions—it’s easy to see why skepticism was felt emotionally even when it wasn’t defended intellectually. Some became Seekers, and others remained quietly within the church, but doubt was an increasing challenge for many.

Ryrie’s narrative concludes with the three great skeptics of the mid-17th century: Edward Herbert, Thomas Hobbes, and Baruch Spinoza. Here the anger against clericalism and anxiety about the foundations of personal faith came together, as they would repeatedly over the next two centuries in the work of Voltaire and Paine, Huxley and Bakhunin. “As their anxieties dissolved one certainty after another, they were left with nothing except their commitment to their moral vision, which increasingly seemed . . . to be detachable from the Christian tradition itself” (182). This came to fruition in the so-called Enlightenment, as skeptical thinkers increasingly rejected Christianity on the basis of fundamentally Christian premises. The rest is history.

Unbelievers is a story. It’s not a critique of doubt, or an apologetics manual. There is little in it to suggest how a Christian should respond (if at all); there are no next steps or bullet points, no gotchas, and few lines that will get quoted in a Sunday sermon or on evangelical Twitter. (A possible exception is the final section on Jesus and Hitler, which is quite outstanding.)

But therein lies its power. Ryrie doesn’t debunk; he describes. He traffics in empathy, not criticism. Augustine’s description of Christianity as fides quarens intellectum (“faith seeking understanding”) is often quoted, and rightly so, but it’s easy to forget that infidelitatis quaerens intellectum exists too. For those looking to make sense of it, Unbelievers will serve as an outstanding guide.