I wasn’t sure what I was getting into when I cracked open conservative political commentator Allie Beth Stuckey’s book You Are Not Enough (And That’s Okay): Escaping the Toxic Culture of Self-Love. You may know Stuckey as a contributor at The Blaze, and someone who, according to her bio, “speaks to . . . Republican organizations,” as well as provides “frequent commentary on Fox News.” I had little familiarity with her when I started, but as I read I realized that as a white, fairly conservative, millennial woman I was her target audience. Unsurprisingly, then, I found her as relatable as her podcast would have me believe (her podcast is actually called “Relatable”). Soon, I felt like I was having a conversation with a friend.

Stuckey aims to address five pervasive myths about the self that millennials, Christians and non-Christians alike, often fall prey to. In her words, “This book is about dismantling the lies the toxic culture of self-love has fed to us and replacing them with God’s truth” (13–14). The myths she seeks to refute are:

Her tone is friendly and winsome, and the personal stories throughout the book give her a credibility that helps the reader believe her when she says that me-centered living isn’t merely theologically incorrect, but uncomfortable, unsatisfying, and exhausting. Rather than being afraid of not being able to make it on our own, Stuckey encourages her readers that 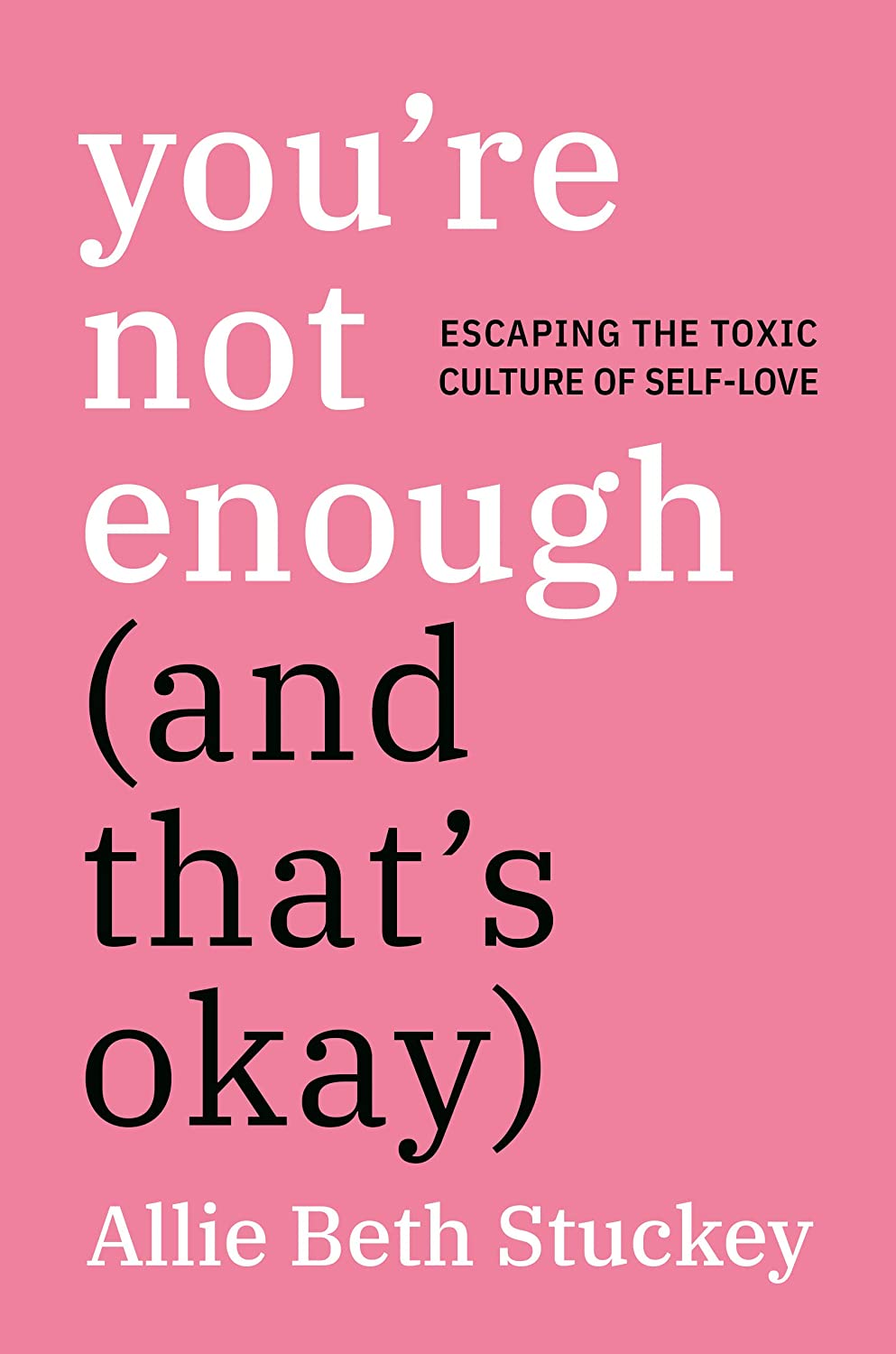 You’re Not Enough (And That’s Okay): Escaping the Toxic Culture of Self-Love

You’re Not Enough (And That’s Okay): Escaping the Toxic Culture of Self-Love

We’re told that the key to happiness is self-love. Instagram influencers, mommy bloggers, self-help gurus, and even Christian teachers promise that if we learn to love ourselves, we’ll be successful, secure, and complete. But the promise doesn’t deliver. Instead of feeling fulfilled, our pursuit of self-love traps us in an exhausting cycle: as we strive for self-acceptance, we become addicted to self-improvement.

The truth is we can’t find satisfaction inside ourselves because we are the problem. We struggle with feelings of inadequacy because we are inadequate. Alone, we are not good enough, smart enough, or beautiful enough. We’re not enough—period. And that’s okay, because God is.

this book is about good news. . . . We get to remove this crushing burden of trying to muster up a love inside us that just doesn’t hold up under the weight of life’s demands and rely on a sovereign God to be our sufficiency, our confidence, our guide, and our giver of purpose. (13)

While the book isn’t as Scripture-saturated or theology-forward as Jen Oshman’s book on the same topic, Stuckey’s take on the issue is no less Christ-centered. She writes conversationally, using a wide array of sources from the secular to the sacred. The biblical basis for her arguments is clear—a refreshing difference from the vague religiosity and the manipulative use of Scripture we often see in politics. The gospel is stated clearly in several places, including one succinct declaration where she states: “In [Jesus’s] death he paid the debt we owed for our sins so that we could be reconciled to a holy God. In his resurrection he conquered sin and death, so that those who believe can live forever with him” (27).

The biblical basis for her arguments is clear—a refreshing difference from the vague religiosity and the manipulative use of Scripture we often see in politics.

I could see each of the five myths easily in our culture. She hits particularly near the mark set by Rachel Hollis’s Girl, Wash Your Face and others in her treatment of the third myth, “You Are Perfect the Way You Are.” In this chapter, she describes the paradox of perfection as “hearing and believing we’re perfect while simultaneously hearing and believing there’s something else we need to do or have (or not do or not have) . . . to make us perfect” (98). Stuckey avoids overstating her case by adding:

[T]here is great benefit in creating healthy habits that tend to lead to a successful life. . . . These things are for God’s glory and our good, but they don’t guarantee what we consider our “best life.” They’re fruit of the obedience of the new self, not the manifestations of the “best self.” . . . “You’re perfect the way you are” leads us into accepting parts of ourselves that we should be rejecting, making excuses for ourselves that hold no lasting value (104).

Her effort to be understood and avoid extremes is admirable, from her discussion of the Enneagram, to her contrast between the “realness” and validity of feelings, to avoiding the lies that would have us believing that “we don’t need work to have a meaningful life and that our jobs are our identity” (138).

The book’s foundational arguments are occasionally set aside in favor of soapboxes. I enjoyed some of these diversions—particularly her encouragement that churches aren’t simply places of “self-fulfillment,” but they rather “exist . . . to encourage and instruct Christians to meet the needs of fellow believers and to equip members to share the gospel and serve their neighbors” (71–72). Other diversions can easily be shrugged off.

One soapbox, however, is worth addressing. Amid what has been a painful season in my city of Minneapolis, her choice to linger on the topic of justice and race in particular is jarring. There are cultural implications to the problems addressed in her book, and she’s right that we should be on guard against performative justice-seeking. But she asserts that biblical justice is made only on an individual level, not on the level of governments and systems (90)—with no acknowledgement of Christian arguments to the contrary.

Perhaps most provokingly, she claims that Jim Crow was “provable” injustice, whereas today’s cry for justice is based on “perceived” injustice (87). Her critique fails to recognize that there is provable racism today—for example, we know that our justice system doles out stronger sentences to black men than white men who’ve committed the same crimes. Having listened to an episode of her podcast on this topic, I understand her opinions are complex. She has done her best to make informed and biblical judgments. But this section is sure to needlessly alienate, and it’s a costly distraction from her message.

Problems of the Self

In spite of this, You Are Not Enough is a commendable book. I connected with it, and believe it could help correct many errors in our thinking while also building up a more biblical understanding of the self.

Like I said, reading Stuckey’s book is like talking to a friend. Despite all we hold in common, our friends may still say things with which we disagree. So while I want to recommend You Are Not Enough, I would qualify it with a reminder that her readers should read, as always, with discernment—holding on to the kernels of wisdom and reproof, and releasing the chaff to the wind.

Jamie Carlson has an MA in Catholic studies and writes about death, dying, and the Christian at her blog, The Unhurried Chase. She also enjoys reading books with her book club, sharing childhood favorites with her kids, and going to movies with her husband. She is a member at Bethlehem Baptist Church in Minneapolis.