Disclaimer: Rachel Held Evans is an “internet friend” of mine, meaning we’ve never met in person but over the last couple of years we’ve laughed online, shared prayer requests, and encouraged each other in difficult moments. We’ve also argued, publicly disagreeing in articles and on Twitter about important issues. So I hope this review is read in that spirit: one of affirmation and critique from a friend.

While her first book (Faith Unraveled, 2010) tackled issues of doubt, science, and faith, and her second (A Year of Biblical Womanhood, 2012) examined problems with, well, “biblical womanhood,” the title of her third entry, Searching for Sunday: Loving, Leaving, and Finding the Church, similarly says it all: Evans shares her story about leaving and finding the church again in a new way. Arranged in seven sections corresponding to the seven Catholic and Orthodox sacraments (baptism, confession, holy orders, communion, confirmation, anointing of the sick, marriage), she chronicles the various glories and pains of growing up in a conservative/fundamentalist evangelical tradition and offers an apologetic of sorts for leaving(?) for the mainline when the incongruities of the former proved too great. It’s a story about death, and yes, resurrection.

Beyond that, Searching for Sunday is purposely presented as an archetypal story (xi). According to the stats, millennials are apparently leaving the church. Evans’s own story of departure and return aims to articulate some of the millennial experience to a confused church: their doubt that won’t be satisfied with easy answers; their fear of exclusion; their burnout from the culture wars and the marriage of evangelicalism with conservative politics; their fatigue once the strobe lights, hip music, and gimmicky youth games didn’t distract them from their burning questions or the pain of their LGBTQ friends. Evans also aims to point the way to a Christianity—a church—with arms open wide enough to draw them back, just as it has drawn her—questions, struggles, and all.

Before examining two substantial themes, I want to offer a bit of praise and agreement. Along with every other reviewer, I envy Evans’s gift with words. I’m partial to writers who can manage to be funny in print, and her youth group stories had me laughing a number of times. Her intro mini-chapters beginning each section were easily my favorite part of the book. Each was skillfully crafted, and after a couple (Water, Bread) I had to stop and meditate.

Substantially, Evans’s study of Alexander Schmemann’s For the Life of the World pays off a number of theological and liturgical dividends. I can’t help but nod in agreement that superficial program changes aren’t enough to bring millennials back to the church. For those addicted to method as the solution, Evans’s message that millennials need something better, something deeper, something stronger—that they need someone—is absolutely necessary. Give them more Jesus, not more amps.

Finally, as a millennial who’s been specifically tasked by my church with shepherding other millennials, I can’t help but love the heart Evans clearly has for drawing our peers back to the pews.

In the recent rush of post-evangelical conversion memoirs I’ve been waiting for the book I Grew Up Evangelical and It Really Wasn’t that Bad—Actually It Was Mostly Great—So I’m Staying. Although my evangelical experience as an Arab has been far from pristine, growing up in mild Southern California churches far from the Bible Belt I mostly don’t recognize the worst Evans talks about. Which is probably why most of my own theological shifts have come with little angst or fanfare. 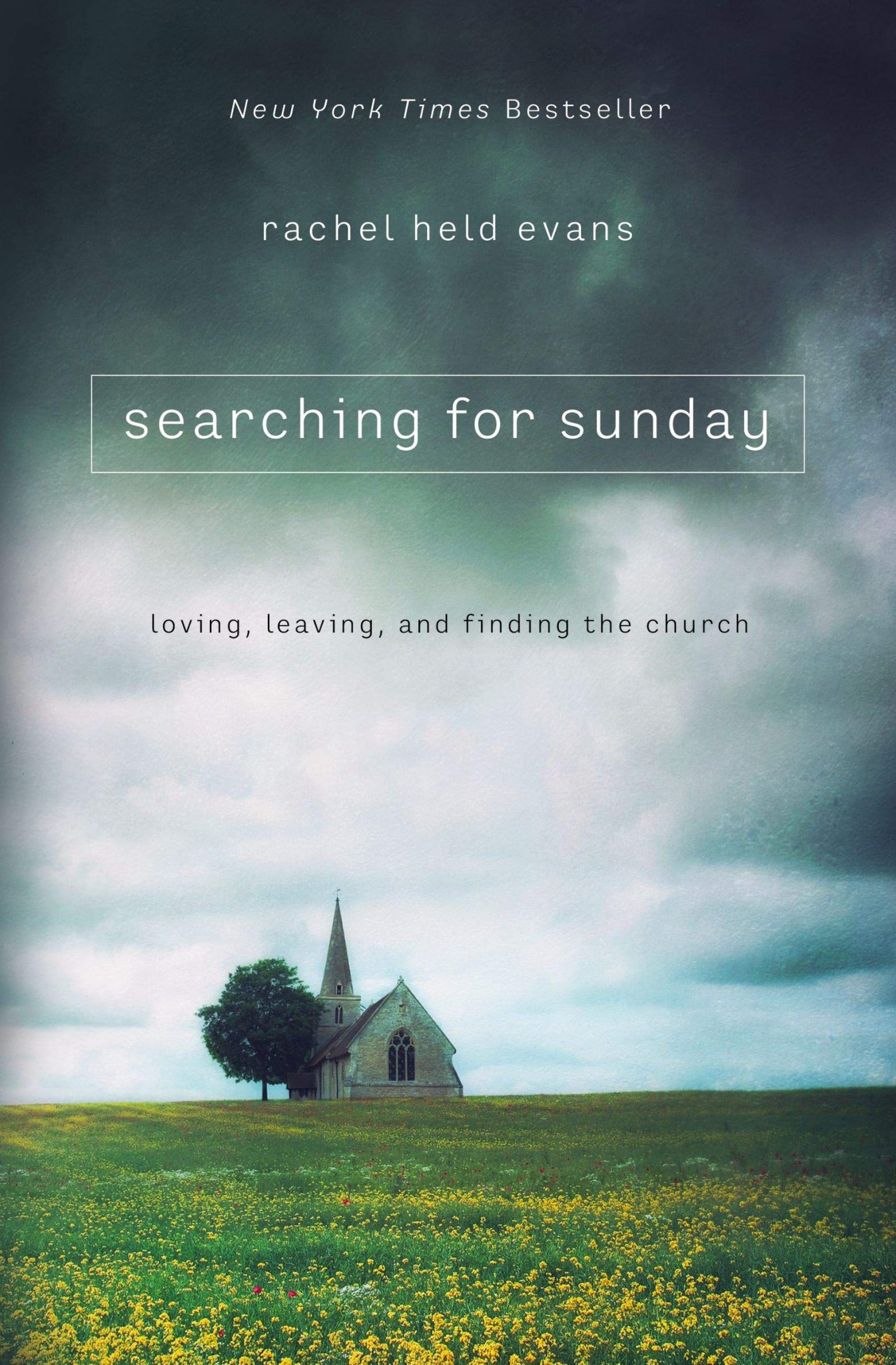 Searching for Sunday: Loving, Leaving, and Finding the Church

Searching for Sunday: Loving, Leaving, and Finding the Church

Greg Thornbury has written about the importance of understanding how, for better or worse, biography shapes theology. Similarly, in his new book, Blind Spots, Collin Hansen observes how our experiences of faith create “blind spots” that cause us to ignore the stories, strengths, and pains of Christians whose experiences don’t match our own. The greatest value of Evans’s book for me was the fact that she does speak for many with experiences unlike mine. These are experiences worth being aware of and responding to with compassion—particularly for those of us prone to assume disagreement is either a certain sign of apostasy, a failure of the intellect, or simply weak faith. If I fail to listen, engage, and acknowledge these stories, I won’t be much use to struggling millennials as anything more than a sparring partner.

Of course, these experiences can generate blind spots of their own. Evans explicitly makes her movement from historic (Catholic, Orthodox, Protestant) views on same-sex marriage—which I’ve already addressed here—a significant factor driving her church search and one of her biggest beefs with evangelicals; she mentions or makes the stories of LGBTQ central to each of the seven sections (with the curious exception of the section on marriage). I can’t simply write off my disagreements as a matter of Evans not having attended seminary, or being a woman, or some of the other dismissive responses I’ve seen. Still, her compassion for the pain of those in the LGBTQ community and the devastating treatment many have wrongly experienced at the hands of the church seems to generate a hermeneutic that (expanding well beyond LGBTQ concerns) doesn’t have a category for a welcome with edges, or for seeing the mercy of church discipline, or, say, for the invitation of a fenced table.

Which brings me to my critique.

Invitation of a Fence

Theologians have long observed that your theology’s strengths (and weaknesses) tend to show up in your treatment of the Lord’s Supper. Evans’s are on display in her treatment of the open table (148). She loves the practice of the open table, with its invitation to all to come and experience Jesus exactly as you are. She reserves her harshest condemnation for those she judges to be self-appointed bouncers in the business of shutting people out of the kingdom.

Surely Protestants can sympathize with any critique of an approach that demands perfection before participation. This logic drove the medieval decline of participation in the sacrament down to about once a year, since you had to be sure you were spotless before you came. John Calvin, in turn, advocated for participation at least once a week, precisely because he saw it as the Father’s table where he feeds his children and nourishes them with righteousness—the Supper is a promise of grace to the weak, not a reward for the righteous. “Let us remember that this sacred feast is medicine for the sick, solace for sinners, alms to the poor,” Calvin wrote, “but would bring no benefits to the healthy, righteous, and rich—if such could be found” (Institutes 4.XVII.42).

That said, the church didn’t practice an open table for reasons, and they are nowhere addressed in Searching for Sunday. Nowhere does Evans reckon with the warnings of 1 Corinthians 11:27–32 that there is an “unworthy manner” of eating and drinking that renders one “guilty concerning the body and blood of the Lord.” Evans alludes to Jesus’s parable of the wedding feast where the Master compels the scum of the earth to come in from the highways and byways after the righteous have declined the invitation (149). I just wish she had read on in Matthew’s telling (22:1–4), where Jesus says that the same inviting Master confronts the guest who doesn’t change his clothes for the occasion and tosses him out. In other words, all sinners are welcome as they are, but eventually they have to take off their sinful garments and accept those provided by the Master.

You don’t have to come to the table cleaned up, put together, conformed to some country club ideal of “church folk” after years of white-knuckling your way to “purity.” That’s not the gospel. The gospel is the Father welcoming the prodigal son with open arms. But when he calls for the new robe and the ring, the prodigal can’t complain about the fit, or try to keep his rags as well. Or when the Father calls to slaughter the fattened calf, the prodigal must not insist on bringing leftovers from the pig trough to eat at the Father’s banquet table. The invitation of a fenced table extends to fellow vagabonds drawn in by the Master’s grace. We plead with other sinners to accept the clothes the Master offers and trade their pods for the bread of life, so that Jesus’s judgment does not fall down on them. Because it is his table, we don’t change his loving call to repentance and faith, especially when the kingdom of heaven is at stake.

Yes, Jesus opposes those who would tie up heavy burdens on the weak without lifting a finger to help. But he’s also the one who calls people to take up a cross, to come and die to self in order to be conformed to his own image. This is the cost of discipleship according to Jesus (Luke 14:25-35). We’re not keen to add burdens, but we do not lower the asking price Jesus himself set.

Following Jesus is hard, and none of us does it perfectly. He is simultaneously radically inclusive and uncomfortably exclusive. Paul’s vice lists (1 Cor. 6; Gal. 5) tag those sins conservative evangelicals tend not to see, as well as sins the mainline would like expunged from the list. Despite Evans’s winsome, often helpful call to rejoin the church despite our generation’s doubts, Searching for Sunday bears the marks of reaction against exclusive fundamentalism and, at times, veers off the other side of the road.

The irony of the book is that the people who probably could benefit from it—theologically grounded church leaders with mostly healthy church experiences—won’t want to hear its challenge, even though many people in their pews share the author’s struggles. They need our care and understanding counsel. On the flip side, I worry those who share Evans’s experiences and background will welcome such validation, even though it reinforces their blind spots—instead of being exposed to the gentle challenge of the Jesus who surprises us all.

Derek Rishmawy is the Reformed University Fellowship (RUF) campus minister at University of California Irvine and a PhD candidate at Trinity Evangelical Divinity School. He co-hosts the Mere Fidelity podcast. You can follow him on Twitter or read more at his blog.