“Everything in Texas is big,” Billy Graham once quipped in 1957. In Rough Country: How Texas Became America’s Most Powerful Bible-Belt State, Robert Wuthnow documents how everything is bigger in Texas, including its influence as America’s most powerful Bible-belt state. Filled with a variety of detailed historical accounts unearthed from a bevy of primary sources, Rough Country provides an important contribution to American religious history from Wuthnow, professor of social sciences at Princeton University.

Early settlers of the Lone Star State called the land “rough country” because of the toil required to make its soil sustainable and productive. In Rough Country, Wuthnow tracks the religious contours of Texas history to show how Texans also labored to cultivate the soil that fostered the civil religion of the Bible belt.

From Reconstruction to the Religious Right and beyond, Wuthnow traces the sociological intersection of religion, race, and politics to record the legacy of Texas’s influence on the Bible belt. Rough Country details how Texas provides “a rich context in which to observe the connections among religion, race, and politics” (372). While evangelicals will quibble at points with Wuthnow’s analysis of historical developments, his thorough storytelling offers an unbridled look into the religious history of the Bible belt’s most powerful state. Moreover, his reflections on the past of Texas civil religion provide several key insights into the future of American evangelicalism.

1. The Decline of a Texas-Sized Belt Buckle

First, Rough Country documents the rise of civil religion and the way churches have attempted to minister in a Bible-belt context. Wuthnow observes:

Rough Country documents both the growth of that Texas-sized belt buckle and what happens as its luster starts to tarnish.

So, how should churches minister in a context in which the rough country of religious soil means civil religion is increasingly dying on the vine? In most places today, civil religion is no longer the “reliable marker of respectability” it once was (43). As a result, fewer people embrace Christianity because it’s helpful; they do so because it’s holy. The decline of civil religion is bad news for the Bible-belt South but good news for the church. It enables the church to abandon a faith that merges God and country to instead declare a message that highlights the cost of death and resurrection.

2. The Eminence of Liberty of Conscience 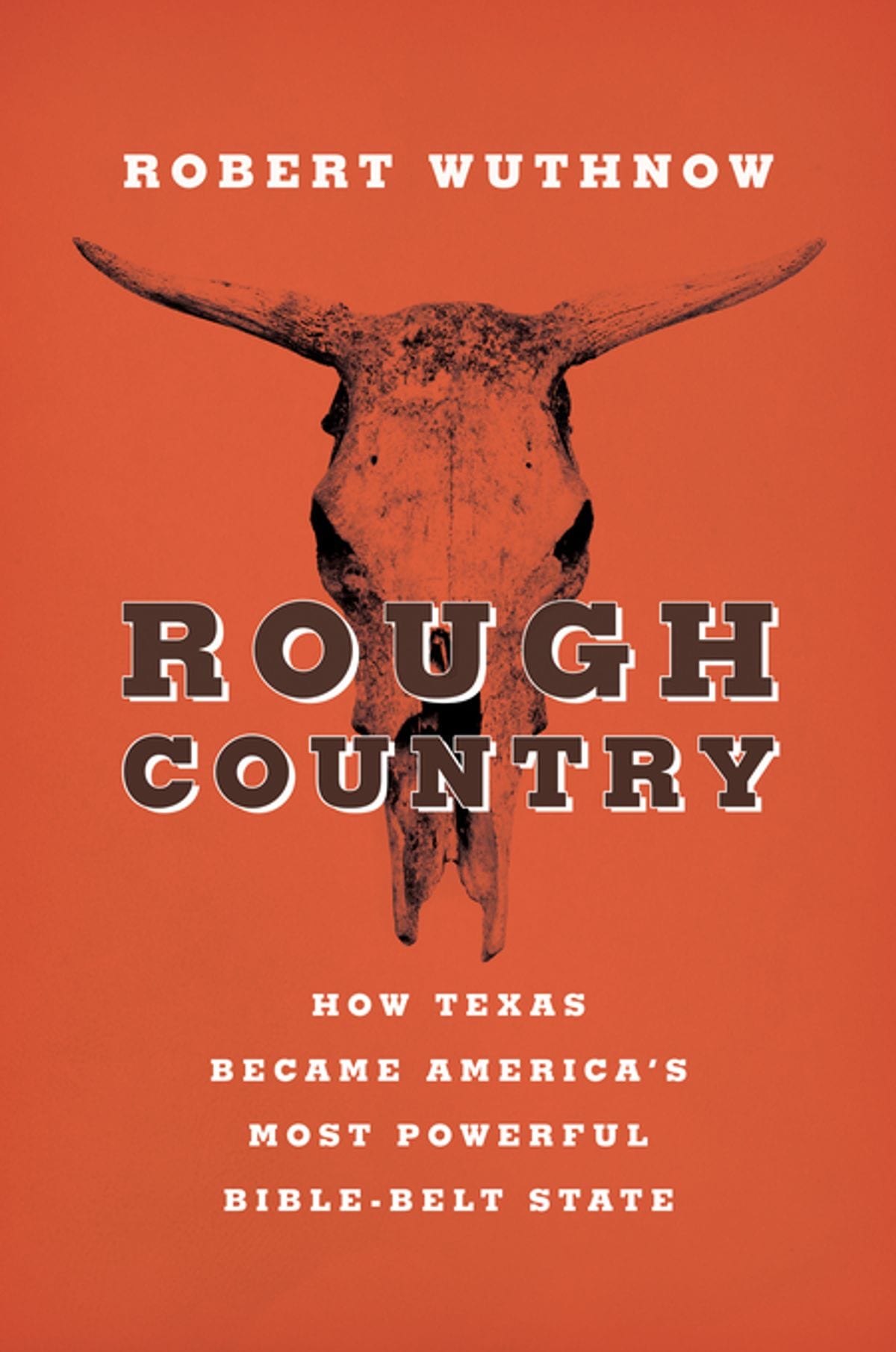 In an era in which religious freedom is increasingly attacked, what can evangelical churches learn from the eminence of liberty of conscience in Texas history? Wuthnow notes the risk and reward of soul freedom: “Liberty of conscience provided cultural space in which congregations could grow. But it created opportunities for controversy as well” (125). As culture becomes more hostile to religion (especially evangelicalism), churches must advocate for religious freedom for all so that we can continue to declare the way of salvation to all. Religious freedom is essential because it enables churches to engage the conscience through biblical conviction rather than the letting the culture subdue the conscience through secular coercion.

3. The Rise of Religious Power

Third, Rough Country highlights the power dynamic that emerges at the intersection of religion and politics. Texas was a state “favorable to theologically conservative ideas and well positioned to have greater influence in the future” (152). Wuthnow traces the rise of religious power from its establishment during the frontier days to its rise during the temperance movement to its climax during the Religious Right. As a result, Texas churches exercised an outsized influence on the shape of the Lone Star state and the broader Bible-belt South. Indeed, Texas congregations “carried greater influence in their denominations than their counterparts did in any other state” (125).

As “God and country” civil religion now declines in the Bible belt, how can evangelical churches navigate a new power dynamic? Wuthnow notes that there’s a “great deal about the trajectory of Texas that parallels the history of America” (444). As the prominence of nominal Christianity collapses, evangelicals must reconsider how to function not as a moral majority but as what Russell Moore in Onward [review | 20 quotes] calls a “prophetic minority.” This begins by strengthening our own local churches and institutions to weather the rise of secularism and the ascendancy of the sexual revolution. Evangelicals must learn to embrace and manifest anew the countercultural kingdom of God.

4. The Rough Relationship Between Race and Religion

Fourth, Rough Country tracks the relationship between race and religion from the days of Reconstruction to the aftermath of the Civil Rights Movement. Wuthnow documents the “startling contrast between the amicable race relations the Texas exposition sought to portray and the circumstances of real life,” especially as seen with lynching (162). The third-most lynchings of any state occured in Texas. Wuthnow notes tragic truths such as that “half the clergy in Texas supported the Klan in 1922” (176). This rough relationship between race and religion continued into the Jim Crow era and beyond. “Everything is big in Texas,” quipped one writer for the Baltimore Afro-American, “except plans for desegregation” (260).

What can evangelicals learn about race and religion that might shape the pursuit of a multi-ethnic future? In 1963, only 20 percent of Texas Southern Baptist pastors said they would “permit an African American to become a member of their church” (292). So, it’s encouraging to see many evangelical churches seeking to prioritize multi-ethnic ministry in their congregations and racial reconciliation in their communities. The gospel that reconciles the broken relationship with our heavenly Father can also reconcile the broken relationship between races. But it won’t occur without intentional effort. Gospel-centered multi-ethnic ministry can flourish when churches actively pursue it by the power of the Spirit.

5. The Contours of Church-State Relations

Fifth, Rough Country documents the contours of church-state relations in Texas from its anti-Mexico roots to its pro-life present. Because Catholicism was integrally bound up with the Mexican regime that had ruled over Texas, Wuthnow observes: “Despite the state’s emphasis on liberty of conscience, its Protestants had never been fully at ease with their Catholic brethren” (112). The prominence of Baptists shaped the importance of church-state separation. “Advocacy for separation of church and state was firmly grounded in Baptists’ emphasis on liberty of conscience” (263). Over time, clergy increasingly “became directly involved in political organizations” (118). In Texas, as well as throughout the Bible-belt South, attempts by churches to influence the state largely coalesced around life, marriage, and religious freedom.

In an increasingly hostile culture, what should evangelical church-state relations look like? Wuthnow notes:

Liberty of conscience and ideas about separation of church and state provide healthy cultural and constitutional protections against religion exercising governmental power or government using its power to promote or inhibit religion. (446)

Wuthnow recounts the time presidential contender Ronald Reagan spoke to 17,000 evangelicals in Dallas in 1980, telling the audience: “I know you can’t endorse me. But I want you to know that I endorse you” (325). Those days are over as evangelicals are pushed further to the margins of the culture. But, in its place, churches must focus on the authority of the kingdom of God over the church as it manifests itself in a right relation to the state.

Overall, Rough Country offers an important contribution to American religious history as it shows the contours of religion, race, and politics in America’s most powerful Bible-belt state. Wuthnow demonstrates how religion provided a framework for society and individuals to tame the “rough country.”

Whether you are a Lone Star native with a Texocentric worldview or simply an interested observer of American civil religion, Rough Country provides a clear glimpse at religion’s past that can reshape how evangelicals engage the future.