Why would anyone publish a book about the imitation of Christ as we approach the 500th anniversary of the Protestant Reformation? Aren’t good Protestants supposed to give up the (Catholic!) imitation of Jesus in favor of seeing him as our substitute?

Thaddeus J. Williams—assistant professor of systematic theology at Biola University—thinks that question is reductionistic. He wants us to understand that Jesus is savior before he’s exemplar, but he’s most certainly the exemplar par excellence, and we sell our savior short if we fail to see him as our example. According to Williams’s new book, Reflect: Becoming Yourself by Mirroring the Greatest Person in History, Christians need to fix their eyes on Jesus so we can become the people we were designed to be.

In his introduction Williams sets the stage by comparing the way of life and the way of death. The first six chapters then offer key components of being human in which we “mirror” Jesus. This isn’t a list I would’ve come up with, but it fits Zack Eswine’s description of Christian discipleship—“apprenticing with Jesus to be human again”: 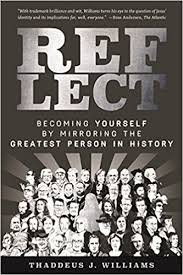 Reflect: Becoming Yourself by Mirroring the Greatest Person in History

Reflect: Becoming Yourself by Mirroring the Greatest Person in History

Each chapter is inspired by a particular passage of the Gospels, but it’s a subtle connection in most cases. Williams isn’t interested in rotely imitating a few specific actions, but being fashioned into the image of the only perfect human. The seventh chapter features a gospel-infused approach to growing in grace in all the ways detailed in the previous six.

The most difficult connection is on “mirroring the artistic genius of Jesus” (ch. 6). There’s not a lot of close textual connection there, and in my opinion it would’ve been easier to make a case for creativity by focusing on imitating God. But before you doubt the relevance of such a chapter, you’ll want to take a look at Williams’s brilliant application of John Calvin (57). Better yet, read the whole thing. Williams will be at work on you the whole time, with the goal of expanding your perspective on “Christlikeness” in ways your quasi-gnostic Christian upbringing never would have imagined.

Speaking of creativity: Williams is a terrific writer, and this book is loads of fun. He employs wonderfully colorful language. For example, he writes that Jesus’s splanchnizomai (the word means “I am moved with compassion,” but Williams glosses it as “gut-twisting emotional reaction”) “set him apart from the calm-bellied religious villains” (57). He also digs into the biblical text for insight. We learn on that same page that splanchnizomai is applied to Jesus “with more frequency than any other emotional term in the Gospels,” and that in the New Testament such emotion always produces action.

The pages brim with asides and illustrations and references in the style of “worldview Christianity.” We’re presented with insight from the life and teachings of Johnny Rotten and John Owen, Sufjan Stevens and Siddhartha and Sophie Scholl—and everyone in between. Those who’ve been in Christian circles a long time will recognize old favorites of the Charles Colsons and Ravi Zachariases of the evangelical world: Malcolm Muggeridge, Fyodor Dostoevsky, Marshall McLuhan. They’re placed alongside more recent favorites like Martin Luther King Jr., David Wells, and N. T. Wright.

This approach means we’re sometimes prevented from wrestling deeply with ideas; it can all feel a bit TED Talk-ish. But the quick movement enables us to meet new conversation partners along the way. Taking a ride with Reflect reminds me of an Uber: convenient, easy, sometimes even delightful and surprising, and ultimately getting me where I wanted to go all along.

The above description suggests this book isn’t one biblical scholars would write. Frankly, that makes it more interesting and useful. Biblical scholars aren’t known for attending to important themes like reason, creativity, and emotion. Since it’s addressed to everybody, not just academics, it has something of the apologetic utility of Andrew Wilson’s If God Then What? or N. D. Wilson’s Notes from the Tilt-A-Whirl. It’s a rare book whose difficult concepts are placed on the shelf not only where they can be reached, but also where they’ll be attractive and inviting.

Even the subtitle (a self-helpish line that will be off-putting to some) is a strategic opportunity to scratch a real “felt-need” itch. And Williams takes pains to avoid the worst interpretation of his subtitle: contra the notion that “God helps those who helps themselves,” the Bible is “the story of how God helps those who are broken beyond self-help” (113). He also repudiates any idea of “Life Coach Jesus” (161).

Those cautions give you a good indicator of Williams’s theological skill in avoiding legalism and bootstraps Christianity. For him, the indicative precedes any and all imperatives. With this perspective, imitation is essential for all Christians, even Protestants celebrating the 500th anniversary of the Reformation.