In recent years, evangelical scholars have begun exploring in earnest the hidden treasures of pre-19th-century theology and piety. This theological spelunking goes under different names (retrieval, ressourcement) and isn’t the coordinated effort of a single school. The fruits can be pleasantly unsettling and surprising.

One fine example of such scholarship is Amidst Us Our Belovèd Stands: Recovering Sacrament in the Baptist Tradition. Michael A.  G. Haykin’s exploration of 17th- and 18th-century Particular Baptist doctrine and practice regarding baptism and the Lord’s Supper. In this slim, well-researched, and clearly written volume, Haykin—who is a professor of church history at the Southern Baptist Theological Seminary—reacquaints evangelicals with the founding fathers (and mother) of contemporary Anglo-American Baptists.

In the first two chapters, Haykin argues that the Particular Baptists, who emerged as a distinct movement within 17th-century English Protestantism, have profound continuities with the broader Puritan movement of that period. The First and Second London Confessions of Faith (1644, 1689), while making significant ecclesiological and sacramental adaptations to the Westminster Confession of Faith, retained the latter’s doctrine of the means of grace. 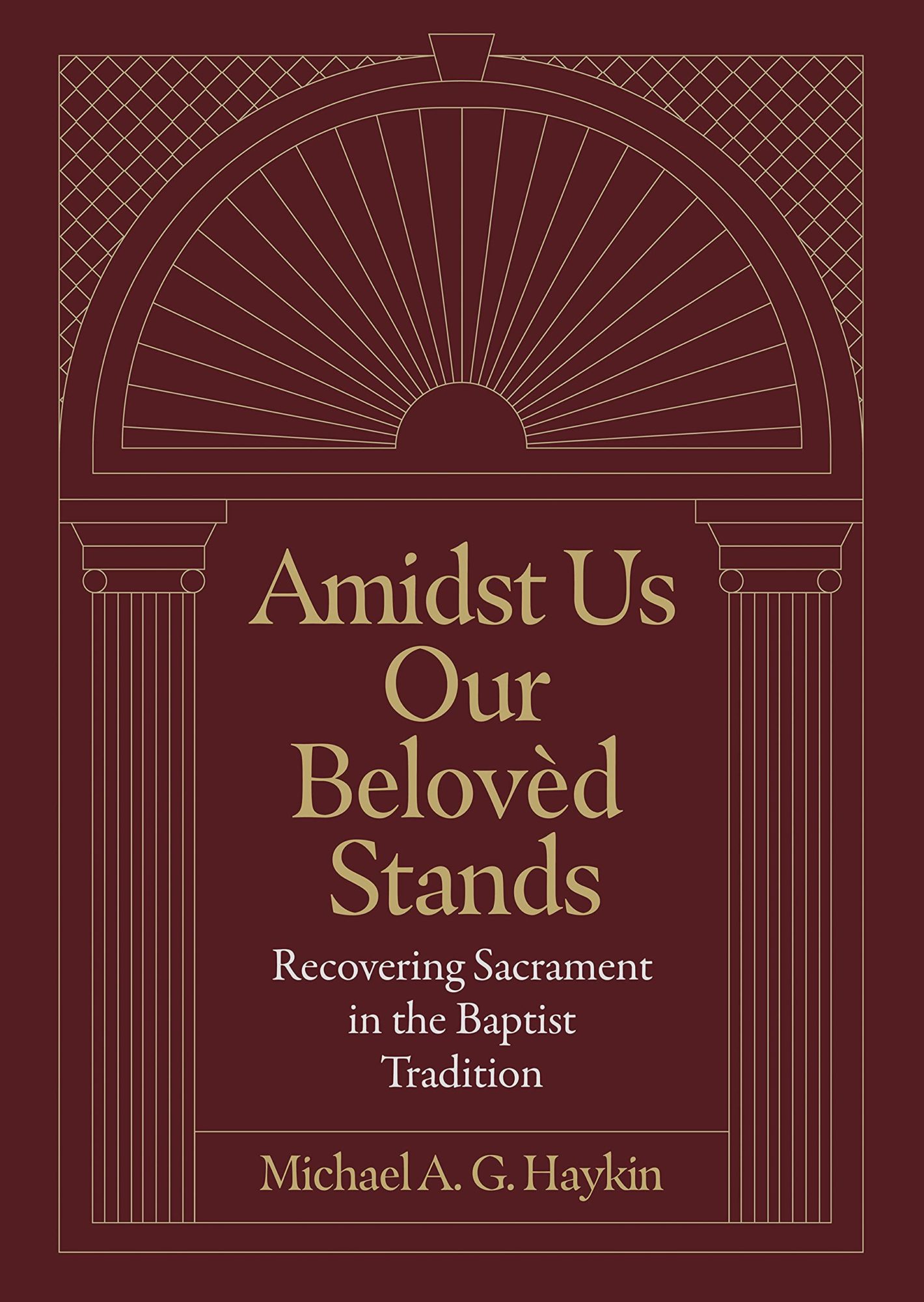 When it comes to baptism and the Lord’s Supper, many Baptists reject the language of sacrament. As a people of the book, the logic goes, Baptists must not let tradition supersede the Bible. So Baptists tend to view baptism and Communion as ordinances and symbols, not sacraments.

But the history of Baptists and sacramentalism is complicated. In Amidst Us Our Beloved Stands, Michael A. G. Haykin argues that many Baptists, such as Charles Spurgeon and other Particular Baptists, stood closer to Reformed sacramental thought than most Baptists today. More than mere memorials, baptism and Communion have spiritual implications that were celebrated by Baptists of the past in sermons and hymnody. Haykin calls for a renewal of sacramental life in churches today―Baptists can and should be sacramental.

Far from affirming the bare memorialism that 19th-century Baptists would come to embrace, these Particular Baptists understood Christ, by the Holy Spirit, to be present to the faith of the recipients of each ordinance. In this respect, Haykin argues, the Particular Baptists’ understanding of how sacraments work is rooted in the theology of Calvin himself. (Although neither the 1644 nor 1689 confession employs the term “sacrament,” preferring “ordinance,” Particular Baptist pastors and theologians spoke of baptism and the Lord’s Supper as “sacraments” in their writings.)

The hymnody of this period, represented in the fourth chapter in a survey of the “eucharistic piety of Joseph Stennett, Anne Dutton and Thomas Steevens,” shows that this understanding of the sacrament was not the unique preserve of theologians, but the common possession of the whole church in worship (91).

Haykin demonstrates from the writings of 18th-century Particular Baptists William Mitchill, Isaac Staveley, and Andrew Fuller—and from the contemporary hymnody of Particular Baptist churches—the continuity with their 17th-century forebears regarding baptism and the Lord’s Supper. At the turn of the 19th century, however, a decisive shift started. Baptists shed the sacramentology of their ancestors, embracing an exclusively memorialistic understanding of the Supper.

Haykin attributes this shift to a profound change in the understanding of the church itself. Before the 19th century, Baptists defined the church in terms of its “marks.” Then they came to define it by evangelistic preaching. The Lord’s Supper played a diminished role in church life—after all, the Supper is not a converting ordinance. “The memorialist view of the nature of the Lord’s Supper,” Haykin observes, “was well suited to [a] growing ambivalence regarding its importance” (55). As Baptists moved into the 20th century, the altar call supplanted the place and importance of baptism and the Lord’s Supper in Baptist churches (123–4).

Before the 19th century, Baptists defined the church in terms of its ‘marks.’ Then they came to define it by evangelistic preaching.

In the book’s third chapter, Haykin examines an intramural Baptist controversy in the 17th and 18th centuries concerning whether persons who hadn’t been baptized—as adults and by immersion—could be admitted to the Lord’s Table. “Closed communion” churches required believer’s baptism as a condition for admission to the Table, while “open communion” churches did not. A related but distinct controversy concerned whether believer’s baptism was a requirement for membership in a Baptist church. Some churches insisted upon this requirement (“closed membership”), while others did not (“open membership”).

Baptists vigorously and sometimes bitterly debated these questions touching on communion and membership. At the dawn of the 19th century, Particular Baptists were no more agreed than they’d been a century and a half earlier. But, Haykin observes, the two 17th-century London Baptist Confessions purposefully declined to answer either question. Confessionally, at least, Baptists were committed to liberty on such matters. Further, Haykin points to two 18th-century ministers, John Collett Ryland and Daniel Turner, as proof that Baptists of different convictions on these questions were fully capable of friendship and mutual respect.

Amidst Us highlights the seriousness with which Particular Baptists approached the doctrine of the church, baptism, and the Lord’s Supper. As Haykin shows, it was Baptists’ ecclesiology that determined their understanding of the nature and necessity of baptism and the Lord’s Supper. The church is an assembly of “visible saints,” and these two ordinances gave visible expression to professing believers as belonging to the Lord Jesus Christ, crucified and raised. Because baptism and the Lord’s Supper are given by command of the church’s Lord, they’re not discretionary but essential to her life and worship. Evangelicals have much to learn from the seriousness with which these Baptists approached these doctrines.

Haykin also demonstrates that the earliest Particular Baptists stood in closer proximity to Reformational theology than is sometimes acknowledged. Their doctrine of baptism and the Lord’s Supper as means of grace stands in continuity with Calvin and the Westminster Standards. To be sure, there are differences. Calvin and Westminster didn’t understand the children of believers to be biblically disqualified from receiving the sign of baptism (this belief stemmed from their conviction that the child of at least one professing believer was by birthright a member of the visible church). And Particular Baptists, as Haykin shows, maintained an ambivalence about the word “sacrament,” which Calvin and Westminster never entertained. But the theology and hymnody of these Particular Baptists show that they, no less than their paedobaptist brothers, gathered around the Lord’s Table in order to commune with Christ, in faith and by the ministry of the Holy Spirit.

Particular Baptists, no less than their paedobaptist brothers, gathered around the Lord’s Table in order to commune with Christ, in faith and by the ministry of the Holy Spirit.

Significantly, this particular debate (and the corresponding debate on open/closed membership) never achieved resolution within Particular Baptist churches. The fundamental tension between their commitment both to a narrow definition of baptism and to the catholicity of the church best accounts for this irresolution.

Baptist or not, readers of all backgrounds will profit from Haykin’s excellent study. The Particular Baptists model how all Christians ought to think seriously about the church’s doctrine and worship. Such is the caliber of Particular Baptist theological reflection that even readers’ disagreements will prompt them to think more precisely and carefully about God’s Word. And, no less importantly, the hymns in this book model how believers ought to respond in gratitude to the Lord of their salvation.

Good doctrine, after all, was meant to be prayed and sung.